Season 4 of White Collar is now on DVD, which means it’s on Netflix, which means I’m finally catching up on episodes. White Collar is probably my favorite crime drama (the only other candidates are NCIS: LA and Castle, and I haven’t liked them as well lately), and I’m fascinated by the characters.

When I first read David Keirsey’s Please Understand Me II chapter on Artisans, I was thinking of Neal Caffrey from White Collar even before Keirsey mentioned that most con-men were extroverted SP types (though of course most SP types [about 30-35% of the population] are not con-men). A hunch like that isn’t enough to type a fictional character, but it’s a good place to start.

Like Loki, typing Neal is complicated by his criminal behavior and possible psychopathy. I have not seen his Myers-Briggs type discussed often, and most of the ones I have seen type him an ENTJ or an ENFP. Since my decision to place him as a sensor instead of intuitive is apparently unpopular, I’d like to address why. While he does go with his “gut feeling” sometimes and rely on intuition, he does not display classic NF qualities like valuing personal authenticity, a focus on lasting emotional connections, and preoccupation with personal journeys. I could almost see him as an NT, but his problem solving abilities seem more focused on real-world results (a Sensing attribute) than on the abstract ideas behind the problems (an Intuitive trait).

The core characteristics Keirsey uses to describe Artisans are these (quoted from his website): 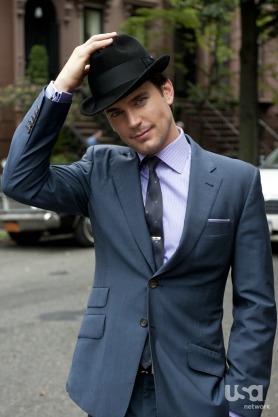 Now that I’ve narrowed Neal down to one of four types (ESFP, ISFP, ESTP, or ISTP), I want to switch from Keirsey’s approach to cognitive functions (which is too elaborate a subject to go into here. If you want background info, see this article).  I’ve settled on ESTP for Neal, which gives him this function stack:

Note: For the remainder of this post, I rely heavily on Keirsey’s Portrait of The Promoter, and Dr. A.J. Drenth’s ESTP Personality Profile.

Extroverted Sensing types (ESxPs) are life-of-the-party people. They enjoy presenting themselves well (for example, Neal’s expensive taste in clothing), and are generally seen as charming (that Neal fits this description goes without saying if you’ve watched the show). Se types are easily bored by routine, and actively seek out new sensory experiences (such as fine dining, romance, and [in Neal’s case] running a con). They like to take action, accomplish tasks, and experience the world. Keirsey describes them as a risk-taking type.

I’ve settled on Introverted Thinking instead of Feeling for Neal’s auxiliary function because of his gift for planning and how serious he becomes when he has to stop and think instead of just being free to act. It is one reason he is such a successful criminal, and why he is so valuable to the FBI. Dr. Drenth phrases it this way:

The fluid nature of their Ti, combined with the keen observational powers of their Se, contributes to ESTPs’ acumen as practical problem solvers. ESTPs can analyze a situation, diagnose the problem, and then determine how to fix it.

You can see examples of Neal’s thinking function in most episodes, as he responds to problems that arise by thinking and planning. Primarily, he approaches problem-solving from a perspective of getting things done efficiently (as opposed to worrying about how each option will affect people involved).

Farther down the function stack, and less conciously available, is Extroverted Feeling. The typical ESTP does not like to share their judgments or true feelings. Keirsey says, “While they live in the moment and lend excitement – and unpredictability – to all their relationships, they rarely let anyone get really close to them.” Even when Neal does open up to people and form bonds with them (like his friendship with Peter), he is still able to run off to a tropical island and smoothly settle into a new life (though it only lasted for one episode in the fourth season).

So, what do you think? Does Neal fit the profile of an ESTP? Is there another type you think fits him better (maybe you have an argument for him as an iNtuitive)?