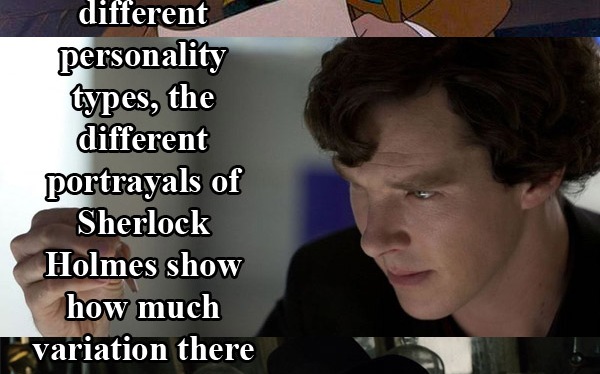 In the world of fictional typology, Sherlock Holmes is typically cited either as the perfect example of an INTP or as a notoriously difficult charter to type. Some writers say this difficulty is because the character displays aspects of several different types (including INTJ and ISTP) due to the writers’ ignorance of Myers-Briggs theory.

While this may be partly true, I think we can pin-down a single best-fit type for most portrayals of Sherlock Holmes in film and television (I’m not covering the original stories in this post). Rather than showing several different personality types, the different portrayals of Sherlock Holmes show how much variation there can be within a single personality type. 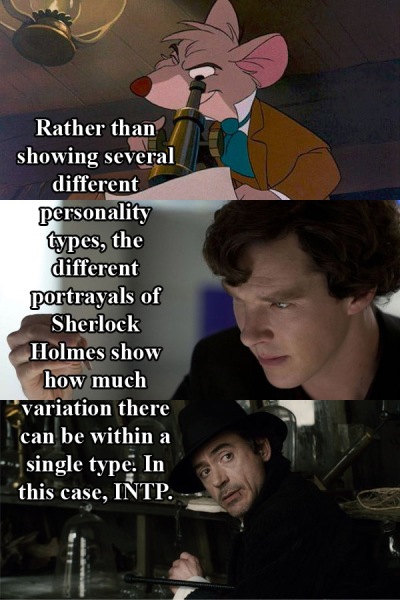 The personality type that fits most film and movie portrayals of Sherlock best is INTP. The function stack for this type is this:

This means that Sherlock first approaches the world with a judging attitude that is focused inward and relies on impersonal analysis. Ti prefers to internalize observations and work with abstract ideas. It “values facts chiefly as illustrative proofs of the idea,” and rejects things that seem irrelevant (Myers, Gifts Differing, p.78). This would explain why BBC’s Sherlock didn’t bother to remember that the earth goes around the sun.

What does that matter? So we go ’round the sun. If we went ’round the moon or round and round the garden like a teddy bear it wouldn’t make any difference. All that matters to me is the work. Without that my brain rots.” — Episode 3, The Great Game

With his secondary function, Sherlock interacts with the outer world using an extroverted perceiving function, in this case intuition. For a good analysis of why Sherlock is an INTP instead of an ISTP (which would use Se instead of Ne), check out MBTI: Sherlock Holmes- INTP. One quote I really like from this post connects Sherlock’s perceiving function with his signature “Holmesian deduction.”

In fact, abductive reasoning seems to be almost describing Extraverted Intuition- seeing the possibilities and coming to a single result at the time. Ni handles the long-range stuff, but Ne gives you what you want at the moment. And Holmes doesn’t seem to be taking in his surroundings as much as he is observing his surroundings and making well educated guesses as to what happened.”

Having Introverted Sensing as third in his function stack means that Sherlock still has access to sensing. It’s not the easiest function for him to use, but it explains why he notices sensing details that might escape other intuitive types. This is one reason I don’t think he is an INTJ — like INFJs they use sensing as their inferior function, and rarely have conscious access to it. An INTJ would have feeling as their third function, while an INTP’s feeling is the hardest for them to access and understand.

Let’s talk about Basil of Bakerstreet from Disney’s The Great Mouse Detective for a moment. On Disney typing charts, I often see him listed as an INTJ. He’s no more INTJ than any other Sherlock, though. That honor belongs to Professor Moriarty, one of the greatest examples of INTJ villain in fiction (and probably Sherlock’s brother Mycroft as well).

Basil is probably the most straight-forward portrayal of Sherlock that I’ll talk about today, and he’s a great example of how Ti and Ne work together. In scenes where Basil is working on a problem, he verbalizes his intuitive leaps while most of his thinking takes place inside his head. That’s why it’s hard for Dawson to follow his line of thinking, just as it has been for different Watsons (who are typically ISFJs) throughout Sherlock’s history. It’s “elementary” to Sherlock, but he doesn’t explain his thinking out-loud so it doesn’t seem obvious or easy to anyone else. What we see is the intuitive side, which isn’t conventionally logical.

The scene where he escapes from Rattigan’s trap is typical of a defeated, deflated INTP. His Fe takes over, and he verbalizes his emotions while losing hope. What pulls him out is the intuitive leap, prompted by Dawson’s comment that they set the trap off now, which gives him an idea for how to escape. He doesn’t explain this idea, though — the bulk of the planning is introverted. We get glimpses of his Ti working as he mumbles calculation, but the only thing he purposefully shares are the instructions that Dawson needs to follow.

Robert Downey Jr.’s Sherlock is more comfortable with his extroverted function than other Sherlocks, possibly because the actor is an extrovert (maybe an ENTP?). Even this portrayal of Sherlock Holmes is not an extrovert, though. It’s the rare extrovert who will go two weeks without leaving his apartment, even when depressed and on drugs (as Sherlock apparently is early in the first film). What makes me certain that he’s an INTP rather than an ENTP, though, are the scenes where he appears in a public place.

In this scene, waiting in the restaurant for John to arrive with Mary, Sherlock is overwhelmed by the number of people and external sensory input. Instead of being comfortable in the outer world, he is stressed by it. He can pretend to be comfortable in a social setting, which he does for a while in the restaurant, but eventually his stress reaction comes out and he’s even more rude than usual while trying to show off his skills of deduction and drive a wedge between Mary and Watson.

As inferior Extroverted Feeling becomes more prominent in the demeanor of the Introverted Thinking type, it comes out in the form of logic being emphasized to an extreme, hypersensitivity to relationships, and emotionalism.” — Naomi Quenk, Was That Really Me? p. 128

He acts similarly overwhelmed and distracted by the crowd when he is boxing. Later in the film, when he’s in a prison yard, Holmes entertains the other inmates to protect himself but can’t wait to escape their company. He is more comfortable with extroverting than other versions of Sherlock Holmes, but it is not his preferred state.

Type Variation – Not A Sociopath

The main reason BBC’s Sherlock doesn’t look exactly like an INTP is because he displays traits of several different mental conditions. According to an article written by four psychiatrists, BBC’s Sherlock displays traits of autism spectrum, “schizoid personality disorder, social anxiety disorder, borderline personality disorder, bipolar disorder, schizophrenia etc.” I got this quote from an article Sherlock describes himself as a “high functioning sociopath,” but that’s not the most accurate description. Personally, I find arguments that he has Asperger’s Syndrome highly compelling, especially since that’s how Watson diagnoses him in this clip:

However, the four psychiatrists I mentioned think “autism would not be the most appropriate diagnosis – schizoid personality disorder would be more fitting to the behaviour he displays.” Whichever diagnosis you go with, though, it is clear the Sherlock portrayed by Benedict Cumberbatch is not simply an INTP. This type is, however, still the core of his personality. As these psychiatrists say, he “displays a whole host of uniquely memorable behaviours that are not autistic or even psychiatric in origin. These behaviours are a result of Sherlock being Sherlock.”

That’s probably the best way to put it — the most defining characteristic of Sherlock Holmes is that he is Sherlock Holmes. INTPs are so rare that Sherlock seems unique, especially since he is a sort of super-human INTP who has mastered such a wide range of skills that you’d be hard pressed to find the equivalent in real-life. David Keirsey says that INTPs number close to 1% of the population, and considers them even rarer than INFJs (though I haven’t found anyone else who agrees with him). Either way, Sherlock is a very famous example of a very misunderstood type.