Newly converted Christians (and even many of us who’ve been in the church for years) often struggle with God’s expectations for them, especially when reading the Old Testament. And I’ll admit, the Law can look really daunting. The Jews traditionally say there are 613 commandments, or mitzvot, in the Torah. Because there’s no temple or priesthood anymore, some have estimated only about 270 of these laws are still applicable today.

Reading the “thou shalts” and “thou shalt nots” might feel overwhelming (“How could I ever keep track of them all?”), or sound unfair (“These don’t make sense; is God setting me up to fail?”), or seem stifling (“Why would He dictate my behavior in this area?”). To get around this, many modern Christians have rejected the Law completely and adopted the mentality that once you accept Jesus Christ as your savior there’s nothing else you need to do in order to be called a Christian.

This belief is mistaken. Jesus told people, “if you want to enter into life, keep the commandments” (Matt. 19:17). He also said He did not come “to destroy the Law or the Prophets” (Matt. 5:17) and that those who love Him will keep His commandments (John 14:15). Jesus thought the Law was not only relevant but also vitally important, and if we claim to follow Jesus we have to agree with Him. But how do we reconcile 613 (even “only” 270) commandments with Jesus’s statement that “My yoke is easy and My burden is light”? (Matt. 11:30). Where is the love and grace of our Savior in the strict rules of the Law?

I believe that from the beginning God’s laws were very simple. He established the Sabbath and marriage pre-Fall (Gen. 2:3, 18-24), and He probably conveyed to Adam and Eve the two great commandments as well — to love God with all you are and to love your neighbor. We also know there were some other laws in extent before God gave the Law at Sinai. Noah was keeping the clean and unclean meat laws (Gen. 7:1-3) and Abram is described as following “the way of the Lord” (Gen. 18:19), but I don’t think they knew about all 613 commandments. As just one example, if the patriarchs knew about God’s law that a man may not take two sisters to wife at the same time (Lev. 18:18), Jacob could not have married both Leah and Rachel without it being addressed as a sin.

I think the Law is God clarifying what He expects from righteous people. Such clarification was needed when He saw how inventive people under Satan’s influence were when it came to doing evil. It’s my belief that God first gave guidelines to people for how to live righteously, rather than thinking up different ways people might sin so He could make preventative laws for everything. Of child sacrifice, for example, God said, “I did not command them, nor did it come into My mind that they should do this abomination” (Jer. 32:35). Paul’s writings seem to agree with this interpretation. He writes, “What purpose then does the law serve? It was added because of transgressions, till the Seed should come to whom the promise was made” (Gal. 3:19). God’s way is simple. We’re the ones who complicated things. 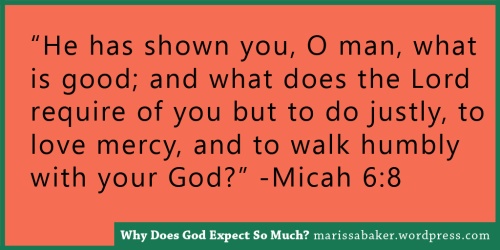 God expects certain things of us because He doesn’t want us to die (by this we’re speaking of permanent death, the fate of the incorrigibly wicked). He knows how the world works and He is a just God who will keep His word regarding the fate of those who persist in wickedness.

Say to them: ‘As I live,’ says the Lord God, ‘I have no pleasure in the death of the wicked, but that the wicked turn from his way and live. Turn, turn from your evil ways! For why should you die, O house of Israel?’ (Ezk. 33:11)

He’s a God of justice, yes, but also a God of astonishing mercy. For those who have converted, been baptized, and commit to following Jesus Christ, “now we are children of God” (1 John 3:2). The entire creation “eagerly waits for the revealing of the sons of God.” For a little while this world has been “subjected to futility,” but a renewal is coming where “creation itself also will be delivered from the bondage of corruption into the glorious liberty of the children of God” (Rom. 8:18-25). In the mean time, God patiently gives opportunities to repent because He doesn’t desire that anyone choose death and evil over the abundant life He offers (2 Pet. 3:7-9).

Keeping the Law is not how we are saved — you cannot earn something that is a free gift of God through our Lord Jesus Christ (Romans 6). However, people can’t expect to be counted among God’s firstfruits if they break His law and despise His authority. Rather, once we turn to God the Law is written on our hearts (Heb. 8:10; 10:16-17). Converted people are internalizing the character of God and learning to walk exactly as Jesus Christ our Lord walked. The Law no longer seems a burden because we’re free from desire to break it.

The Lord’s Right to Rule

God doesn’t ask unreasonable things of us. Rather, He sets before us a very simple choice: to do good and live, or to do evil and die (Deut. 30:15). In many cases, our real problem isn’t that we don’t understand God or that we’re scared of a God who seems angry — it’s rebellion against His right to expect certain things from His creation. We don’t like the idea of an ultimate universal authority, but how we feel about it doesn’t change the fact that God is sovereign and that the Lord Jesus Christ has authority over everything and everyone (Matt. 28:28).

When we think about it this way, God’s detailed Law and entire Bible are an enormous blessing. He’s not a hands-off deity who set the world in motion and then left humans alone to figure things out for themselves. As the Creator of all, He’s given us a guide to how He set things up and what we need do to share in His great plan and purpose. The Law is an expression of His love and grace because He was revealing aspects of His character and pointing people toward a future where we can have a relationship with the Lawgiver and keep His commands from the heart as we’re transformed to be like Him.

12 thoughts on “Why Does God Expect So Much?”