I recently had the opportunity to join Jody Hedlund’s release crew for her newest Young Adult books. Always is the prequel novella for the new Lost Princesses series, which kicks-off with Evermore. If you like sweet, YA romances with Christian themes and a fairy tale setting then I think you’d enjoy these books.

Unlike Jody Hedlund’s other medieval romances, these two are more fairy tale than historical fiction. The fairy-tale quality is fairly subtle, with hints of whimsy and magic slipping through the pages but never fully realized. She has said the final two books in this series will be even more fairy-tale like, and since I love fairy tales I’m very much looking forward to those.

This lovely little novella follows the story of lady-in-waiting Felicia and elite king’s guard Lance as they race to save the lives of three young princesses. With the invading King Ethelwulf hot on their heels, Felicia and Lance are the only things standing between death and the orphaned, 3-year-old crown princess and her newborn twin sisters.

I couldn’t put this novella down and finished it in just a few hours. While there were a few things that stretchered my willingness to suspend disbelief (such as how easy it was to care for newborns while on the run), I accepted it because in a shorter story like this there simply isn’t time to explain all the details.

My favorite part of this story is how the romance blossomed between Lady Felicia and Lance as they grew to first respect, then admire, and finally love each other. It’s such a beautiful love story. 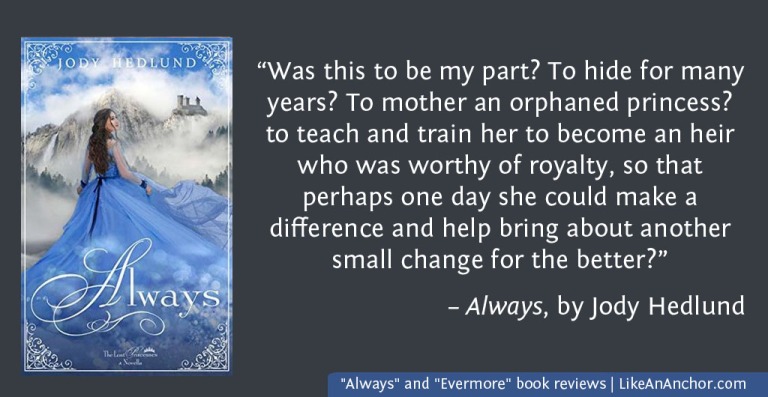 Shortly before her 20th birthday, Lady Adelaide learns that she’s not just an orphan raised by a noble family who indulged her desire to learn to jousting and leadership alongside her foster cousins. She’s actually one of the lost princesses and the true heir to Mercia’s throne. Unfortunately, the man who has conquered her kingdom also knows who she is.

Adelaide flees with the sons of her adopted family — scholarly Mitchel who she counts as her closest friend, and recently-returned warrior Christopher who has been branded a traitor for opposing the cruel King Ethelwulf. Together, they seek a legendary treasure prophesied to help a young ruler filled with wisdom rid the land of evil and usher in a time of peace.

I love the story lines and characters in this book. I didn’t want to put it down. Every spare moment of the day I was unlocking my phone and snatching a few extra minute with the Kindle app. Adelaide and Christopher’s relationship is sweet and they’re so well matched for each other that I didn’t even mind that he’s probably not the best choice (politically speaking) for a queen to marry.

I’ve been making sure to refer to these books as fairy tales in this post because I don’t want anyone to make the mistake I did and assume they’re historical fiction. I’d been expecting fairy-tale-like writing layered over a historical setting and at first I thought that’s what these were. The stories felt like reading a fairy tale, but the setting is Mercia and Wessex a few generations after the reign of King Alfred the Peacemaker. Moreover, King Ethelwulf hired Danes of Viking descent to help him fight because they’d perfected sea warfare. Those were enough clues that I thought I recognized the time setting as the mid-to-late 1000s or early 1100s.

However, the real King Alfred did not divide his kingdom between twin daughters. In fact, he had 6 children and it was his son Edward who succeeded him (though his daughter Æthelflæd did rule Mercia). Moreover, during this time period, men and women wouldn’t have been dancing at balls together in the way described and I very much doubt they could have found a “three-tiered cake covered in white cream.” I know from reading her Noble Knights Series and The Reluctant Bride that this author wouldn’t have made a mistake like that if she meant these to be historical fiction.

Just to make sure, I asked the author and Jody was kind enough to clarify. She said, “Any references to real places or people are not intentional! It IS definitely more on the fairy tale side of the spectrum this time! … These were so fun to write because of the freedom to add in a little more of the fairy tale feel!”

I love fairy tales, so this certainly didn’t disappoint me. If you go into this story expecting medieval historical fiction, though, you’re likely to be a bit confused. But if you expect a fairy tale, then you’re probably going to love these books. The final two in the series will be released later this fall, but you can order these today and start reading right away.

Always was just released yesterday. You can order your e-book copy by clicking here

Evermore will be released on August 27th. You can pre-order the e-book it by clicking here

. Paperback will be available on the release date.

My thanks to Northern Lights Press and Jody Hedlund for an ARC of these novels in exchange for an honest review.