In Micah, the prophet speaks out against immorality and injustice. The book also contains some beautiful Millennial passages, since ultimately the solution to the evils Micah talks about is the rule of Jesus Christ. Even so, he doesn’t tell us to just sit around begging Jesus to come back and fix everything. We’re still responsible for our actions, and God still expects the immoral and unjust to repent or face the consequences.

Woe to those who devise iniquity, and work out evil on their beds! At morning light they practice it, because it is in the power of their hand. (Mic. 2:1)

A friend recommended the TV series Hell on Wheels, and in the pilot episode there was a conversation where one character says, “there were certain lines that I crossed, lines of morality I didn’t think myself capable of crossing. But that’s what men do in war.” The main character replied, “Moral men don’t.”

This scripture in Micah 2 is talking about that first kind of man — the kind who crosses lines of morality when they think there won’t be consequences. The kind who plots how they can get away with evil things, and then does whatever they want as long as they have the power to do it. God hates that sort of thing.

As Micah goes on, God promises that those who covet, steal, oppress, and lie will be destroyed because they have hurt God’s people while they defiled and polluted their lives (Mic. 2:1-11). This refers to anyone walking contrary to God; the next chapter moves on to a more specific group of evil doers.

And I said: “Hear now, O heads of Jacob, and you rulers of the house of Israel: Is it not for you to know justice? You who hate good and love evil; who strip the skin from My people, and the flesh from their bones; who also eat the flesh of My people, flay their skin from them, break their bones, and chop them in pieces like meat for the pot, like flesh in the caldron.” Then they will cry to the Lord, but He will not hear them; He will even hide His face from them at that time, because they have been evil in their deeds. (Mic. 3:1-4)

This isn’t just talking about civil leaders either. The religious leaders were also corrupt.

Now hear this, you heads of the house of Jacob and rulers of the house of Israel, who abhor justice and pervert all equity, who build up Zion with bloodshed and Jerusalem with iniquity: her heads judge for a bribe, her priests teach for pay, and her prophets divine for money. Yet they lean on the Lord, and say, “Is not the Lord among us? No harm can come upon us.” (Mic. 3:9-10)

These were the leaders who were supposed to guide the people to God, and instead they plotted to increase their wealth at the expense of others. They thought that merely by virtue of being in leadership among God’s people that God would protect them, but He doesn’t protect those who exploit the authority He has given.

Therefore because of you Zion shall be plowed like a field, Jerusalem shall become heaps of ruins, and the mountain of the temple like the bare hills of the forest. (Mic. 3:12)

Though the leaders are harshly judged — “For everyone to whom much is given, from him much will be required” (Luke 12:48) — the people don’t get off without correction. If we forsake the Lord, we’re responsible for that even if we were “just following” whoever’s in charge.

Hear now what the Lord says: “Arise, plead your case before the mountains, and let the hills hear your voice. hear, O you mountains, the Lord’s complaint, and you strong foundations of the earth; for the Lord has a complaint against His people, and He will contend with Israel. “O My people, what have I done to you? And how have I wearied you? Testify against Me.” (Mic. 6:1-3) 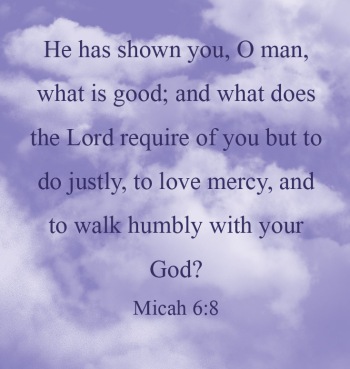 The Lord asks Israel if they have anything to reproach Him with, any reason they can give for forsaking Him. They really can’t accuse Him of anything, but they do reply in verses 6-7.

With what shall I come before the Lord, and bow myself before the High God? Shall I come before Him with burnt offerings, with calves a year old? Will the Lord be pleased with thousands of rams, ten thousand rivers of oil? Shall I give my firstborn for my transgression, the fruit of my body for the sin of my soul? (Mic. 6:6-7)

The fact that they even suggested a human sacrifice shows just how far away the people had strayed from true worship. It’s like the people are saying they’ve given up on following God because it is too hard and He never seems satisfied. God shuts that idea right down.

He has shown you, O man, what is good; and what does the Lord require of you but to do justly, to love mercy, and to walk humbly with your God? (Mic. 6:8)

So the answer to Israel’s questions is, “No, God will not be pleased with thousands of rams or rivers of oil.” He wants you. In some ways, that’s harder than just going through rituals, But its also reassuring. You might feel you don’t have anything to offer God, but you have the one thing He really wants — you.

Today, God works on a small-scale to win individual hearts to Him, but the permanent solution to the problem of evil men is still in the future.

For out of Zion the law shall go forth, and the word of the Lord from Jerusalem. He shall judge between many peoples, and rebuke strong nations afar off; they shall beat their swords into plowshares, and their spears into pruning hooks; nation shall not lift up sword against nation, neither shall they learn war anymore. (Mic. 4:1-3)

This is still in the future, but the first steps toward God’s kingdom on earth have already been taken. Micah 5:2 prophecies the coming of “One to be Ruler in Israel, Whose goings forth are from of old, from everlasting.” this verse is quoted in Matthew 2:5-6 in reference to the birth of Christ. Because Jesus lived and died as prophesied, ultimate victory is assured.

Therefore I will look to the Lord; I will wait for the God of my salvation; my God will hear me. Do not rejoice over me, my enemy; when I fall, I will arise; when I sit in darkness, the Lord will be a light to me. I will bear the indignation of the Lord, because I have sinned against Him, until He pleads my case and executes justice for me. He will bring me forth to the light; I will see His righteousness. (Mic. 7:7-9)

Who is a God like You, pardoning iniquity and passing over the transgression of the remnant of His heritage? He does not retain His anger forever, because He delights in mercy. He will again have compassion on us, and will subdue our iniquities. You will cast all our sins into the depths of the sea. (Mic. 7:18-19)

God is where we must look for the solution to sin — both our sins, and those of the people around us. We can’t fight against injustice or immorality on our own, but we can stand firm knowing that the commands of God are true, and that the victory He has promised will come.