I tried a couple recipes for snickerdoodle bars or blondies before finding this one from Six Sisters Stuff. It’s so good! I still prefer the actual snickerdoodle cookies, but this is a very tasty bar form that takes much less time to make since the dough doesn’t need chilled and you bake the whole thing at once.

Combine the butter, brown sugar, eggs, and vanilla in a large bowl by hand or with an electric mixer. Stir in dry ingredients.

Spread batter in a greased 13×9-inch baking pan. In a small bowl, mix the cinnamon topping ingredients, then sprinkle over the top of the batter. 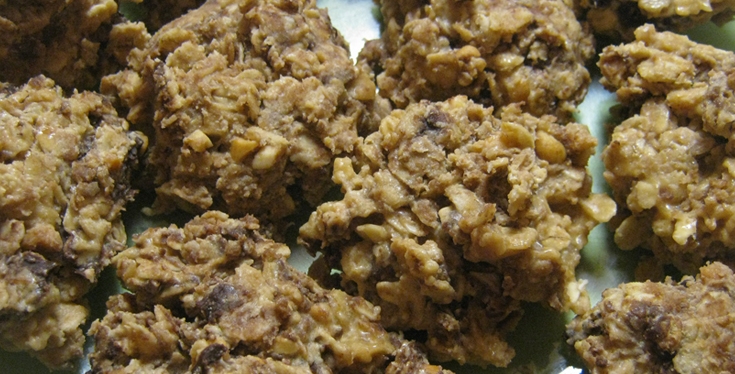 Okay, perhaps that is a bit of an exaggeration, but these are seriously good. My previous no-bake recipe (a rather standard one using cocoa powder) typically resulted in a sticky, fudge-like mess that tasted good but wasn’t much like a cookie. These are more substantial, and hold their cookie shape once they’ve set.

You could make it with creamy peanut butter, but I prefer having the crunchy peanut pieces. That’s also the reason I use full-size chocolate chips — they’re large enough not to melt completely, so there are chunks of chocolate in the finished cookie. If you’d rather have the chocolate all melted in, just stir it longer or use mini chocolate chips.

Combine sugar, milk, butter, and crunchy peanut butter in a large sauce pan. Bring to a boil over medium-high heat. As soon as the mixture boils, remove from heat.

Stir in vanilla and oats. Add chocolate chips and stir just long enough to mix them in, but not long enough to completely melt the chips. Drop from a spoon onto cookie sheets covered with wax paper. Chill and serve. 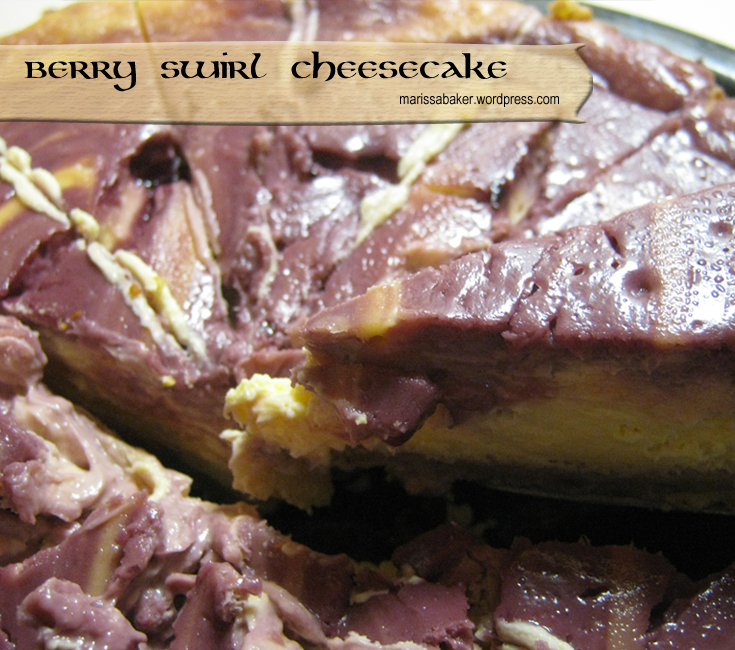 I tried out an almond raspberry cheesecake a few weeks ago, which tasted great but I wasn’t quite happy with how it cooked up. Fortunately, this time I ran out of raspberry jam and substituted black raspberry jelly. Oh. My. Goodness. Black raspberries and cheesecake belong together.

The basic recipe is much the same as the last one, but I used dough hooks to make the crust instead of hand-kneading it and that worked well. I also didn’t swirl extra jelly into the top, hoping the cake would crack less. It was less, but still not perfect.

Preheat oven to 325° F. Line a 9-inch spring-form pan with aluminum foil. Using the dough hooks on an electric mixer, cream butter and sugar. Add ground almonds and 1/2 cup of flour, and mix well. Flour hands and press dough into the spring-form pan. Bake for 12 to 15 minutes. 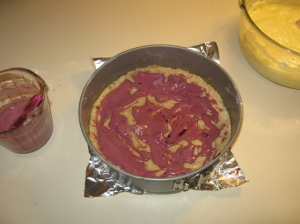 Beat cream cheese, sugar, and vanilla at medium speed with electric mixer until well blended. Add eggs, one at a time, mixing at low speed after each addition.

Bake cheesecake for 1 hour at 325° F or until center is almost set. Run a knife along the inside edge of the pan ring when it comes out of the oven. Cool before removing rim of pan. Refrigerate 4 hours or overnight. 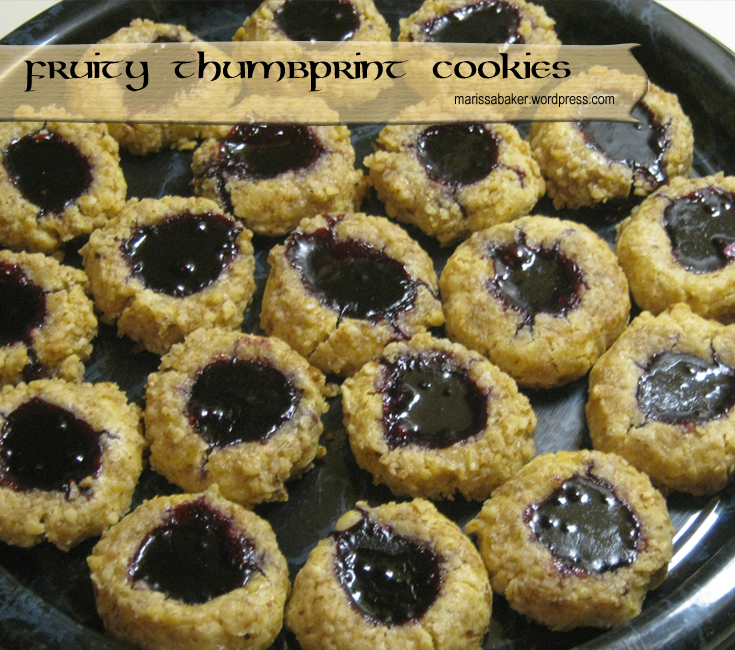 Really wanted a filled cookie the other day, so I compared several recipes online and came up with this. The previous recipe I’d been using made fewer cookies with the same amount of butter, so this is definitely an improvement. We used black raspberry jelly from a local Amish store and they were delicious.

Using an electric mixer, cream butter and sugar on high speed until smooth (about 2-3 minutes).

Preheat oven to 350°F and line baking sheets with parchment paper. Beat egg whites in a small bowl until bubbly and frothy.

Form dough into 1-inch balls and dip in the egg whites, then roll in chopped nuts. Place on the cookie sheets. Flatten balls slightly, then press with your thumb or a small spoon to make a well in the center. If dough cracks, reshape with fingers. Fill each indentation with 1/2 teaspoon jam.

Bake cookies for 10-12 minutes or until slightly firm and barely golden on the edges. Let cookies cool for a minute or two on the cookie sheet, then transfer to a wire rack.

Stir glaze ingredients together until smooth, adding sugar or milk to reach desired consistency. Drizzle over cooled cookies and allow a couple hours for glaze to set.

I usually make a cheesecake when we’re heading anywhere that needs desert, so for the last potluck I went to I decided to try something new. I thought raspberries sounded good, and I needed an unleavened crust so I settled on a modified version of this Scottish shortbread. Then I thought almonds might be a good idea, so I threw some of those in as well. It tasted good, but as you can see from the photos it cracked while baking. I have an idea that just might take care of that problem, so I’ll probably be posting a “take two” after my next baking attempt.

Preheat oven to 325° F. Line a 9-inch spring-form pan with aluminum foil. Cream butter and sugar. Add ground almonds and 1/2 cup of flour, and mix well. Turn out onto a lightly floured surface and knead for 5 minutes, adding flour to make a soft dough. Press into the spring-form pan, and bake for 12 to 15 minutes. 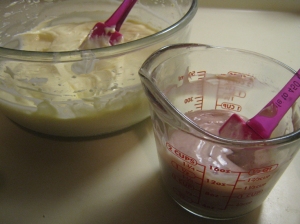 Beat cream cheese, sugar, and vanilla at medium speed with electric mixer until well blended. Add eggs, one at a time, mixing at low speed after each addition.

Mix 3/4 cup of batter with 1/4 cup raspberry preserves. Spoon 1/3 of the raspberry mixture over the crust.

Bake cheesecake for 1 hour at 325° F or until center is almost set. Run a knife along the inside edge of the pan ring when it comes out of the oven. Cool before removing rim of pan. Refrigerate 4 hours or overnight.