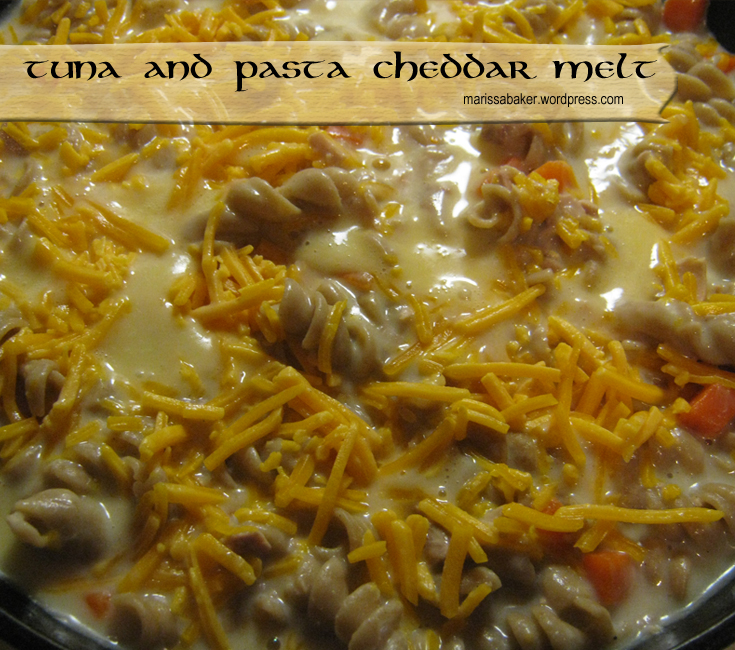 I think I found the original for this recipe on a site for Campbell’s soup, but I changed its ingredients to add carrots and use this cream soup substitute from Center Cut Cook instead of canned soup. Haven’t tried the soup yet in any of my other recipes that call for cream of chicken, but I plan to. The texture is perfect, though the color and taste is a bit different.

Heat the broth and water in a 12-inch skillet over medium-high heat to a boil. Stir in the pasta. Reduce the heat to medium. Cook until the pasta is tender, stirring often. Do not drain.

Meanwhile, in a small sauce pan, melt butter over medium-low heat. Whisk in flour and let cook for 1-2 minutes. Slowly stir in 1/2 cup chicken broth, then 1/2 cup milk. Whisk until it begins to thicken. Let it simmer for a few minutes. Season with salt and pepper.

Stir the thickened soup, 1 cup milk and tuna into the skillet with the pasta. Stir in 1/2 cup of cheese, then sprinkle the rest over the top. Stir the bread crumbs and butter in a small bowl. Sprinkle over the tuna mixture and cook until the mixture is hot and bubbling.