I started watching Doctor Who a few years after “new Who” started, beginning with Eccleston and continuing on in order. I liked Nine, but fell in love with Ten. Even though I was still catching up at that point, knew it was coming, and had Matt Smith episodes that I could watch, I went into mourning for a month after he regenerated and refused to watch any of Eleven’s episodes. But I finally did, and I liked him almost instantly.

And then just a few years later he left. By that time I’d caught up with all the episodes, so there wasn’t the assurance of knowing who’d replace him. It was, in many ways, more traumatic than David Tennant leaving because on top of losing a Doctor I loved, I didn’t know who might replace him. It could have been anyone — a woman, an American (the Horror!), a non-Whovian … 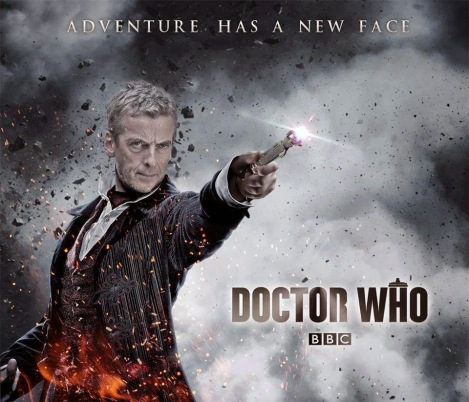 … and then it was Peter Capaldi, and I stopped freaking out. That’s when some of my friends started freaking out, though — he’s too old and too grumpy and shouldn’t be trusted with our favorite character. But I had a good feeling about him for some reason.

I think I was right. It takes a while the first episode after the Doctor regenerates for him to settle into a personality, and he flitted through a few of the old ones before we got a good sense of who he’ll be now (including asking for a very long scarf and screaming “Geronimo”). Still, I think I’m going to like the Doctor this way. And I have very, very high hopes for the upcoming “Robot of Sherwood” episode (I’m a bit obsessed with Robin Hood legends. Actually Medieval things in general).

There’s plenty of in-depth reviews already, so I’ll just touch on a couple things I though were of note …

Steampunk title sequence! Last time they changed the title and music I was upset, but this time I liked it. I suppose the gears are actually supposed to make me think of time and watches rather than steampunk, but who cares — it was cool. Like bow ties.

The cameo appearance of Matt Smith might not have been surprising for some people, but it was for me. And it was splendid. Clara needed it, and I think some of Matt’s fans probably did, too. *cue sobbing*

“Girl In The Fireplace” is my favorite episode, so I loved the parallels here. Well, “loved” in the sense that I liked how it reminded me of this episode even though robots harvesting human beings for spare parts is bloody creepy.

Clara was splendid. There have been rumors floating around that Jenna Coleman will be leaving in the Christmas episode, and I really hope that’s not true. I’ve liked her as a companion, and I like her even more after seeing her stand up to Madam Vastra and try to convince The Doctor that she’s not an egomaniac by shouting “Nothing is more important than my egomania!”

One of my favorite scenes is where the Doctor is talking with a homeless man (didn’t catch his name, but planetclaire.org says it’s Barney) about his new face.

The Doctor: Why this one? Why did I choose this face? It’s like I’m trying to tell myself something. Like I’m trying to make a point. But what is so important that I can’t just tell myself what I’m thinking? I’m not just being rhetorical here. You can join in.
Barney: I don’t like it.
The Doctor: What?
Barney: Your face.
The Doctor: Well I don’t like it either. I mean it’s alright up to the eyebrows. Then it just goes haywire. Look at the eyebrows! These are attack eyebrows. You could take bottle caps off with these.
Barney: They are mighty eyebrows indeed sir.
The Doctor: They’re cross. They’re crosser than the rest of my face. They’re independently cross! They probably want to cede from the rest of my face and set up their own independent state of eyebrows. That’s Scot, I am Scottish and I’ve gone Scottish.
Barney: Yes you are. You are definitely Scot sir. I hear it in your voice.

Love the bit of Scottish attitude that’s showing up along with his new accent, and I particularly like the more reflective side we’re glimpsing in this Doctor as he puzzles over why he chose this face — what message his past selves are trying to send him. On the same subject, there’s a particularly heart-tugging line of dialogue at the end where he tells Clara, “You can’t see me, can you? You look at me and you can’t see. Do you have any idea what that’s like? I’m not on the phone, I’m right here. Standing in front of you. Please just… just see me.”

We see you, Mr. Capaldi. And you look like The Doctor. Not my Doctor perhaps, but certainly a Doctor we can learn to love.

A couple years ago when my sister and I were at the Ohio Renaissance Festival on Barbarian Weekend, we heard the sound of drums and bagpipes from the direction of Reveler’s Stage. Intrigued, we followed the music and saw Albannach perform for the first time. Since then, our goal has been to make it back to the Ren Faire on a day Albannach was performing, and this year we finally made it for Highland Weekend. We watched all three of their shows, so it was nearly three hours of awesome music. You can hear samples and buy songs on their website. 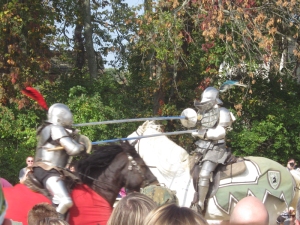 In between Albannach’s second and third shows, we meandered over to the Arena of Champions for a full armor joust. It’s always a highlight of the Ren Fest, and this year we were treated to a tourney with four knights jousting instead of the usual two.  Usually it seems that when they divide the audience up to cheer for a specific knight, I happen to be sitting on the side that loses. This year, however, “our” knight won his joust, but unfortunately we couldn’t stay for the 5:00 joust to see the winners compete. 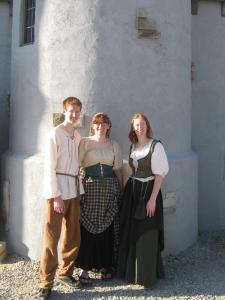 I was sewing like a mad woman last week so all three of us (my brother, sister, and me) were able to go in costume. Perhaps not quite the costume we were hoping for (my brother would have preferred noble man to peasant), but we’ll plan on that for next year. Only a couple of our pieces were new for this year, but I think the overall mixing-and-matching turned out rather well.