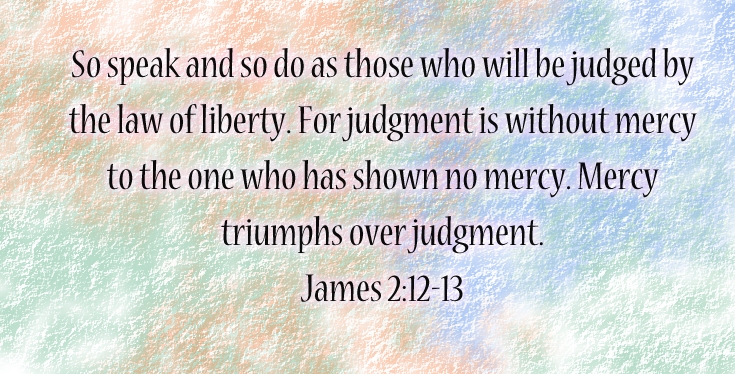 I wonder why it is that people tend to go to extremes in so many things. It’s almost impossible to be neutral or moderate on anything from politics to how you feel about a TV show without someone telling you that you have to have a decided opinion one way or another. This spills over into how we approach morality as well — we either go along with the culture and adopt an “anything goes” mentality, or we dig our heels in and don’t approve of anything.

Now, most Christians I know are actually a lot more balanced than either of these views, but there is a very real danger of going to either extreme. We can become too tolerant about something like the fact that cohabiting couples are the norm in pop culture, and just accept this trend in society  even though we know what God says about sexual immorality. People tend to go to extremes over the issue of homosexuality as well, either supporting it wholeheartedly or placing it high on their “most horrible disgusting sin ever” scale.

But is either view how God wants us to respond to sin? This is an enormous topic, and I might very well be biting off more than I can chew, as the saying goes. But it’s something I felt like I should study and share, so here it goes.

Sin in the Church

Let’s start with a very foundational principle of scripture: “all have sinned and fall short of the glory of God” (Rom. 3:23). There’s no “my sin is better than your sin,” because all of us have committed sins that could only be removed by the sacrifice of Jesus Christ. It can’t really get “worse” on the sinning scale than requiring God Himself to die to remove your death penalty.

But, again with our tendency to go to extremes, we might take this fact and become too accepting of sin in our lives and in the lives of others. After all, we’re no better or worse than anyone else, so let’s just all live and let live, right? That’s what the Corinthians did, and Paul wasn’t too happy about it.

It is actually reported that there is sexual immorality among you, and such sexual immorality as is not even named among the Gentiles—that a man has his father’s wife! And you are puffed up, and have not rather mourned, that he who has done this deed might be taken away from among you. … Your glorying is not good. Do you not know that a little leaven leavens the whole lump? (1 Cor. 5:1-2, 6)

They thought tolerance was a good thing. Paul said to get this sinful man out of the church.

I wrote to you in my epistle not to keep company with sexually immoral people. Yet I certainly did not mean with the sexually immoral people of this world, or with the covetous, or extortioners, or idolaters, since then you would need to go out of the world. But now I have written to you not to keep company with anyone named a brother, who is sexually immoral, or covetous, or an idolater, or a reviler, or a drunkard, or an extortioner—not even to eat with such a person. For what have I to do with judging those also who are outside? Do you not judge those who are inside? But those who are outside God judges. Therefore “put away from yourselves the evil person.” (1 Cor. 5:9-13)

The issue here is that we cannot approve of someone who knowingly practices sin while professing to follow Christ. The people outside the church who commit sin are still sinning, but it is not our place to make judgements about them. The people inside the church should know better, though, and so should we.

Woe to those who call evil good, and good evil; who put darkness for light, and light for darkness; who put bitter for sweet, and sweet for bitter! (Is. 5:20)

Christians are not immune to sin, but there is a difference between a Christian who sins, recognizes it, repents, and stops sinning and a Christian who knowingly practices a sinful lifestyle. The latter reflects badly on the One we profess to follow, Jesus Christ, Who said, “If you love Me, keep My commandments” (John 14:15). Paul tells us this type of person who practices sin should be put out of the church until they repent and stop sinning (which did happen in this case, as we can read in 2 Cor. 2:5-11).

A Chance to Be Good

Paul instructed us to exercise good judgement within the church, but not to judge those who are outside it. So what should our attitude be towards those who commit sin while not following Christ?

In answering any question of this sort, the first thing we should look at is the example of Jesus Christ. He was God in the flesh, and the way He responded to a situation shows us how God wants us to respond in similar situations.

And the Pharisees and scribes complained, saying, “This Man receives sinners and eats with them.”

So He spoke this parable to them, saying: “What man of you, having a hundred sheep, if he loses one of them, does not leave the ninety-nine in the wilderness, and go after the one which is lost until he finds it? And when he has found it, he lays it on his shoulders, rejoicing. And when he comes home, he calls together his friends and neighbors, saying to them, ‘Rejoice with me, for I have found my sheep which was lost!’ I say to you that likewise there will be more joy in heaven over one sinner who repents than over ninety-nine just persons who need no repentance.” (Luke 15:2-7)

The scribes and Pharisees had a very “holier-than-thou” attitude toward sinners. They despised Jesus for eating with people who were not considered righteous and rebuked Him for letting them touch Him (Luke 7:37-39). We get the sense that if a Pharisee encountered someone they thought of as a sinner, they would have either had nothing to do with them or been harsh in their condemnation of how horribly sinful this person was. But that’s not how Christ handled things.

When “the scribes and Pharisees brought to Him a woman caught in adultery,” Christ’s response was to write on the ground and then say, “He who is without sin among you, let him throw a stone at her first.” They all left one by one, and when there was no one left to accuse her Jesus said, “Neither do I condemn you; go and sin no more” (John 8:1-11). He did not condone her sin by telling her she could go off and continue committing adultery, but neither did He condemn her as a person.

When Jesus heard that, He said to them, “Those who are well have no need of a physician, but those who are sick. But go and learn what this means: ‘I desire mercy and not sacrifice.’ For I did not come to call the righteous, but sinners, to repentance.” (Matt. 9:10-13)

We’re not supposed to be okay with sin or say that it is good, but the key to what our response should be is mercy and love. That is how Christ called people to repentance — not by telling them they were evil, but by offering them a chance to be good.

Judge not, that you be not judged. For with what judgment you judge, you will be judged; and with the measure you use, it will be measured back to you. And why do you look at the speck in your brother’s eye, but do not consider the plank in your own eye? (Matt. 7:1-3)

We saw how harshly the Pharisees judged other people, and we can see how severely they were judged in return by reading Matthew chapter 23. It serves as a warning to us not to judge others from a self-righteous attitude. We do have to make judgements about right and wrong as relates to our own conduct and in situations like Paul was talking about in 1 Corinthians, but we need not be harsh and condemning. In fact, that attitude can be dangerous.

Therefore you are inexcusable, O man, whoever you are who judge, for in whatever you judge another you condemn yourself; for you who judge practice the same things. (Rom. 2:1)

The context of this verse (Rom. 1:18-2:16) discusses some of what we think of as the very worst sins. That might make us think this warning doesn’t apply to us, until we read James.

For whoever shall keep the whole law, and yet stumble in one point, he is guilty of all. For He who said, “Do not commit adultery,” also said, “Do not murder.” Now if you do not commit adultery, but you do murder, you have become a transgressor of the law. So speak and so do as those who will be judged by the law of liberty. For judgment is without mercy to the one who has shown no mercy. Mercy triumphs over judgment. (James 2:10-13)

I’ve heard it said that we can’t judge other people for sinning differently than us, and I think that’s true. We all have weaknesses, and we’re not supposed to decide that they are better weaknesses than someone else, even if they’re less visible (like, a tendency to lie can be less visible than a tendency towards promiscuity) or seem like they’re “not hurting anyone.”

We’ve now made a full circle in our discussion, and are back to the topic of “all have sinned.” I said earlier that all sins are equally bad, because all sins require Jesus Christ’s death to pay the penalty on our behalf. I want to add something to that, though, because I’ve never felt satisfied with such a black-and-white view of sin. It’s obvious that there’s a difference between petty theft and murder, for instance. Both are against God’s laws, both are sins, and both can only be washed clean by Christ’s blood. But one is far more damaging to society and other people.

We can see God acknowledging this in the Old Testament laws, where some sins incurred a physical death penalty and some did not. In the New Testament, we see similar distinctions. A thief is told to “steal no longer,” but rather work “with his hands what is good, that he may have something to give him who has need” (Eph. 4:28). In contrast, those who commit sexual transgressions are warned, “he who commits sexual immorality sins against his own body” and defiles the temple of God (1 Cor. 6:18-20). Both are sinful, but one causes more damage than the other.

As we consider the topic of sin inside and outside the church, let’s keep our focus on following Christ’s example of showing mercy while faithfully revealing God’s laws in our words and actions. We must not “approve of those who practice” sin (Rom. 1:32), but we also must not hate other people or follow the scribes and Pharisees’ example of harsh judgement.