Sukkot/the Feast of Tabernacles is over for another year. We kept the Feast on the East Coast this year, and I’ve come back with collections of new friends, sea shells, and blog pot topics mined from messages we heard.

The Feast pictures Christ’s Millennial reign described in Revelation 20:4 and other prophecies. In this verse, the saints are said to “live and reign with Christ for a thousand years.” Revelation 1:6 and 5:10 describe our role as “kings and priests.” There’s quite a bit of responsibility contained in those roles, but it boils down to one simple task. In the words of a gentleman who spoke on the second day of the Feast, “kings and priests point others to Christ.”

When Israel asked for a king, God called it a rejection of Him because they preferred having a physical ruler and military commander to trusting in Him (1 Sam. 8:7, 19-20). This request wasn’t unexpected, though, and God already had guidelines for kings in place. Only a native Israelite could rule (Deut. 17:15), he wasn’t allowed to amass a huge army, or take the people back to Egypt, or marry many wives (Deut. 17:16-17), and he had to write a copy of the law (Deut. 17:18).

And it shall be with him, and he shall read it all the days of his life, that he may learn to fear the Lord his God and be careful to observe all the words of this law and these statutes, that his heart may not be lifted above his brethren, that he may not turn aside from the commandment to the right hand or to the left, and that he may prolong his days in his kingdom, he and his children in the midst of Israel. (Deut. 17:19-20)

Knowledge of God, reverence for Him, obedience, and humility are key qualifications for kingship. The first king, Saul, was chosen because he could lead armies and was humble (1 Sam. 9:16, 21). When he lost that humility and stopped obeying God, he was rejected as king (1 Sam. 15:11, 17).

And when He had removed him, He raised up for them David as king, to whom also He gave testimony and said, ‘I have found David the son of Jesse, a man after My own heart, who will do all My will.’ (Acts 13:22)

To become kings, we must have a heart like the King of kings. God won’t let people rule in His family if they aren’t on the same page as Him. There’s a psalm David apparently wrote for his successor, Solomon, that talks about this.  Psalm 72 points to Messiah’s reign and describes God as a great King, whose example of righteous judgement and commitment to His people lesser rulers would do well to imitate. Kings are supposed to model what Jesus Christ is like, and point to Him by their example.

When there was a tabernacle or temple standing, priests were always there. Their job was to minister before the Lord and “to bless in His name” (Deut. 10:8). They were also involved in settling judicial disputes, especially in the time before the kings (Deut. 21:5).

One of the primary ministerial responsibilities of the priests involved offering sacrifices. People couldn’t just sacrifice to God anywhere — they had to come to the temple and have a priest present it on their behalf. Today, Christ fills that role of intermediary between believers and God. He has helpers, though, just as the High Priest did in the Old Testament. 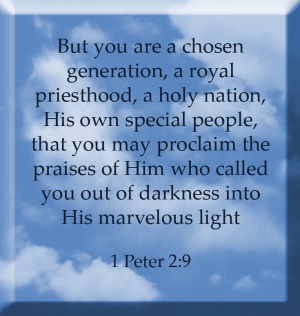 you also, as living stones, are being built up a spiritual house, a holy priesthood, to offer up spiritual sacrifices acceptable to God through Jesus Christ.  (1 Pet. 2:5)

We’re already becoming a priesthood today, and we’ll be doing even more in the future. As priests, we serve and point others to our High Priest, Jesus Christ (Heb. 4:14-5:10). The quallifications for this type of service are very similar to those for a king.

Then I will raise up for Myself a faithful priest who shall do according to what is in My heart and in My mind. I will build him a sure house, and he shall walk before My anointed forever.  (1 Sam. 2:35)

To walk before God’s Anointed, the Messiah, forever, we must tune-in to His heart and mind. We have to follow His lead, teaching others about Him and pointing to the High Priest. Everything we do in any sort of leadership role — now or in the future — is done in service to the King of kings and Priest above all priests. Pointing others to Him is the best thing we can do for the people we’re called to serve.