With Captain America: Civil War coming out fairly soon (7 weeks is soon, right?) I thought I’d add a post on Scott Lang to my collection of fictional MBTI types. It’s also a pretty good excuse to buy and re-watch Ant-Man.

If you do a quick Google search to see how others on the interwebs are typing Scott Lang, you’ll mostly find ESTP, with a few ISTP, ISFP and one INTP guesses thrown in. One thing all these types have in common is that they’re extroverting their Perceiving process, so that’s where we’re going to start (the P/J preference in an MBTI type refers to how we interact with the outer world). 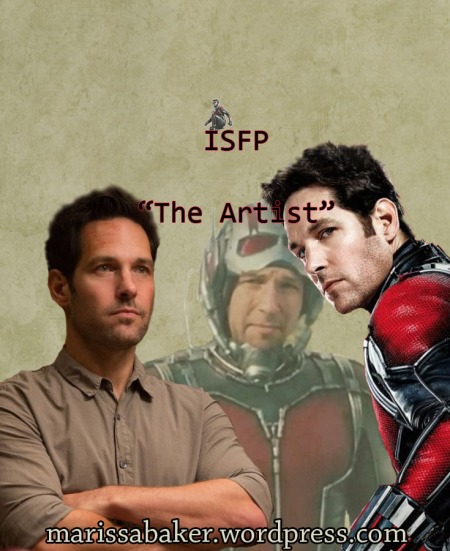 The S/N preference describes our perceiving function, which is the mental process we use to learn new information. Isabel Meyers wrote that Sensing types “depend on their five senses for perception.” They want to see, touch, and test the information they’re taking in. Subjective or indirect information is less trustworthy, and less interesting, than their own direct experiences. Intuitives, on the other hand, “are comparatively uninterested in sensory reports of things as they are” (Gifts Differing, 57). Intuition is an innovative process that resembles advanced pattern recognition (in Personality Hacker’s words) and focuses on exploring possibilities.

Types that have a “P” in their four-letter name extrovert this mental process. Personality Hacker describes Extroverted Sensing (Se) as a “real-time kinetic” function that’s very in-tune with verifiable details of the outer world. Types with Se high in their function stack are typically very comfortable in their bodies and have a natural talent working with their hands.

Extroverted Intuition (Ne) is the function that ENTP Iron Man leads with. It’s very much about exploring the outer world and trying things just to see what will happen. It actively searches for patterns that haven’t been found and understood yet.

Looking at Scott Lang in Ant-Man (we’re not covering the comics here, just the film), I don’t really see much evidence of him using Intuition. He’ll still have intuition in his function stack (Introverted Intuition is the opposite of Se, so in an SP type that will be either his tertiary or inferior function) but it’s not what he leads with. Just a few examples:

The F/T preference describes how we make decisions about our behavior and what we think the world should look like. Feeling types typically prioritize how a decision lines up with their values and those of society. Feeling is concerned with the emotional impact of a decision. Thinking, on the other hand, “is essentially impersonal” (Gifts Differing, 65). This process seeks objective truth that doesn’t depend on the perspectives of other people

For “P” types, the judging process is internally focused. Introverted Feeling (Fi) types tend to check-in with the emotional impact of a decision by looking inward. They want to “determine what feels the most in alignment with oneself” (Personality Hacker). For them, decisions have to “feel right” and authentic.

Introverted Thinking (Ti) also checks in with the inner reality, but doesn’t focus on authentic feeling. Instead, it prizes things that “make sense.” Whether or not Ti types can objectively explain a decision, it has to line-up with the theory they’ve formulated about how the world works. They are interested in facts, but “chiefly as illustrative proofs” of their ideas (Gifts Differing, 78).

This one was harder for me to pin-down in Scott. The difference between Fi and Ti confuses me, but a couple articles from Personality Junkie helped clear things up (click to read “Introverted Feeling (Fi) vs. Introverted Thinking (Ti)” and “The Laws of P-Types: Fi & Ti Laws“). Prelude Character Analysis’ ISFP vs. ISTP article was also useful.

The question now becomes what order Scott uses these functions in. Does he lead with his Extroverted Sensing process (ESFP) or with his Introverted Feeling process (ISFP)? There are very few scenes where we see Scott seeking out people so he can re-charge or where he seems focused on the outer world. His internal ides, cares, and identity are what’s important. Those are all marks of an Introvert. For a character whose entire motivation is based on doing what lines up with his internal locus of control, it makes sense for that introverted decision-making function to take center stage. This makes his ISFP function stack:

You can learn a lot about people by how they respond under stress, and in Scott we do see a stress-reaction consistent with Inferior Thinking rather than Inferior Intuition (as would be the case for an ESFP). When stressed out, he doesn’t lose control over sensory details or withdraw and get angry. Instead, he starts asking questions and trying to get back on familiar footing (“Who are you, who is she, what the hell is going on here, and can I go back to jail now?”). Stressed Feeling types also tend to act rather than shut-down, which is what Scott does whenever there are obstacles to his plan or when something traumatic happens (like Antony’s death).

One reason people might not like an ISFP typing for Scott is that this type is consistently stereotyped as too “artsy” to go into a field like engineering or implement logical plans. Yet, Dr. A. J. Drenth notes that SFP types “may find themselves curiously drawn to Investigative subjects like math, science, computer science, engineering, etc.” though it’s not necessarily a good fit for their type. They can do it, like Scott, but they may struggle to fit into the system, become frustrated, and even act out in some way (though not necessarily as illegally as Scott did). You can also find personal accounts from ISFPs who work as chemists, geologists, computer programmers, doctors, and engineers. Personality type describes how someone’s mind works — it doesn’t limit what they can and cannot do with those mental processes.