There are a few verses in the New Testament that tell us we “are not under the law” (Rom. 6:15; Gal. 5:18). Though some use this as permission to act however you want so long as you’ve confessed Jesus, most Christians realize that God’s commandments are still in effect. Jesus did not “come to destroy the Law or the Prophets … but to fulfill” (Matt. 5:17), and Paul said his own writings “establish the law” rather than repeal it (Rom. 3:31).

So why do these passages tell us we’re not under the law? I’ve heard many explanations, and touched on some myself, but none of them really answered the question of why Paul would use this phrase. They focused more on trying to say “that’s not really what he meant” than on trying to figure out why Paul chose these words to argue his point. Recently, though, I came across the best analysis of the phrase “not under the law” that I’ve ever seen. It was just a short passage in a little book called Fill These Hearts: God, Sex, and the Universal Longing by Catholic writer Christopher West.

West writes about our desires — that we can either deny them and go on a “starvation diet,” indulge them in this life like “fast food,” or direct them toward God and partake in His “banquet gospel.” When addressing the idea of freedom in relation to desire, he says,

The Apostle Paul writes that those who “are led by the Spirit .. are not under the law” (Gal. 5:18). They’re free from the law — not free to break it (that’s license); they’re free to fulfill it because they don’t desire to break it. Christ didn’t come into this world to shove laws down our throats. He came into the world to align the desires of our hearts with the divine design so we would no longer need the laws (140)

This isn’t just West’s own particularly theory — it’s a solid reading of the Biblical text. Basically, he’s just summarizing in modern English what Paul was explaining in Galatians 5 and putting the phrase “not under the law” in its proper context.

This verse in Galatians is preceded by a discussion of two covenants. The Old Covenant is described as one that “gives birth to bondage” (Gal. 4:24). When the people broke that covenant, they bought a death penalty on themselves. Jesus paid the price of that broken covenant and freed us from sin with His sacrifice, then mediated and established the New Covenant (Heb. 8:6).

Stand fast therefore in the liberty by which Christ has made us free, and do not be entangled again with a yoke of bondage. (Gal. 5:1)

Paul is telling us that if we go back to studiously keeping every aspect of the law as if that will save us “Christ will profit you nothing … You have become estranged from Christ, you who attempt to be justified by law; you have fallen from grace” (Gal. 5:2, 4). We can’t treat the Old Covenant as our way to salvation. That does not, however, grant license to sin.

For you, brethren, have been called to liberty; only do not use liberty as an opportunity for the flesh, but through love serve one another. For all the law is fulfilled in one word, even in this: “You shall love your neighbor as yourself.” (Gal. 5:13-14)

“Love” here is agapao — the divine, selfless love of God. When we start becoming love as God is love, we will keep His laws from the heart instead of by compulsion to an external system.

That is, we’re no longer held in bondage to a cycle of sin and death. Christ pulled us out of that and set us on a path of walking in the Spirit. If you keep reading verses 19 through 21 you get a list of the “works of the flesh.” All these works are sins under the Old Covenant and under the New Covenant “those who practice such things will not inherit the kingdom of God” (Gal. 5:21). Someone walking in Jesus won’t act like this. They will shun things prohibited by God’s law because those things are anathema to God’s character — which we see as “the fruit of the Spirit” found in verses 22 through 25.

The early chapters of Romans discuss this same subject with slightly different wording. First, Paul sets up a connection between sin and the law. He explains that “all have sinned” (Rom. 3:23), but we wouldn’t know that without the law to tell us about sin (Rom. 4:15; 5:13; 7:7). The law let us know we were enslaved to sin.

knowing this, that our old man was crucified with Him, that the body of sin might be done away with, that we should no longer be slaves of sin. … Likewise you also, reckon yourselves to be dead indeed to sin, but alive to God in Christ Jesus our Lord. Therefore do not let sin reign in your mortal body, that you should obey it in its lusts. (Rom. 6:6, 11-12)

When Jesus died, He paid the penalty for all sin, which was exposed by the law. When we accept Him, are baptized, and commit to walking in relationship with God, we also “die” in a figurative sense. We’re freed from sin. It’s not supposed to shackle us anymore, and we don’t have to obey its pulls.

Here’s Paul saying exactly the same thing West was about freedom not being license to sin. Those who are “not under the law” still aren’t allowed to break the law. In fact, the more we become like God the less we’ll want to break His rules. 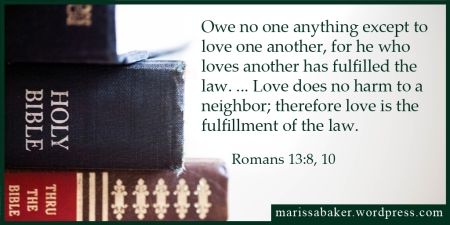 In Romans 7, Paul draws an analogy between being under Old Covenant law and a marriage. Marriages end when one of the married people dies (Rom. 7:1-3). The Old Covenant represented the first marriage between God and His people. That Covenant ended at Christ’s death and, through Him, we died to it as well.

Therefore, my brethren, you also have become dead to the law through the body of Christ, that you may be married to another—to Him who was raised from the dead, that we should bear fruit to God. (Rom. 7:4)

Now, we are betrothed in marriage to Jesus Christ. We’re being transformed on the inside to become like Him and our heavenly Father. We’re not “under the law” because we’re becoming like the Lawgiver (Is. 33:22; Jas. 4:12). We’re marrying the One who fills the law to its fullest extent.

God is love. As we become like God we learn to “be love” as well, and that leads us toward fulfilling the law (Rom. 13:10). We’re not freed from the law so we can do whatever our fleshly nature urges, but rather to live-out the fullest expression of God’s divine law by imitating His character.

2 thoughts on “What Does “Not Under The Law” Mean?”