If you’re a Christian, it’s a good bet you’ve read and/or heard the Sermon on the Mount more than once. And if you’re like me, you probably think you’re pretty familiar with this straight-forward message Jesus delivered during His time here on earth. But in a sermon a few weeks back, the speaker said something that prompted me to take a deeper look.

I hadn’t thought before about what a radical message this must have seemed when first preached. Matthew even tells us people who heard Jesus were “astonished at his doctrine” (Matt. 7:28, KJV). Throughout Jesus’ words a message is woven that tells us our human way of looking at things is wrong. Something that makes no sense to us might be exactly what God is looking for, and the things we’d consider reasonable might not be what He wants at all. This sermon is about showing us a new way of thinking and living. 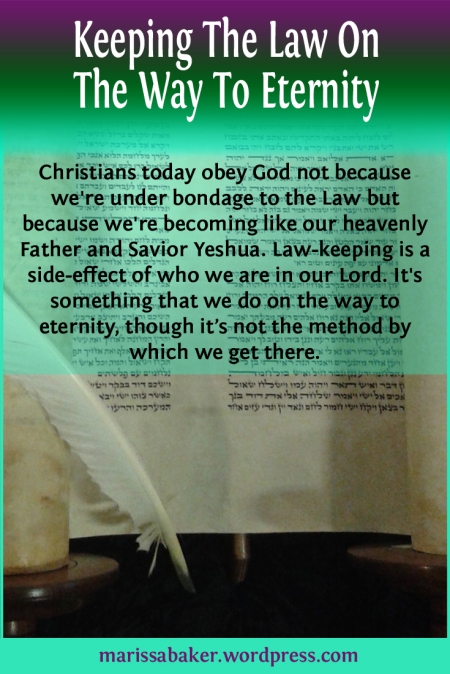 Following the Beatitudes (which we talked about last week), Jesus describes people who follow Him as salt and light. All the attributes described earlier are meant to be visible in His people, showing the world good works that will cause them to “glorify your Father who is in heaven” (Mat. 5:16, WEB). Jesus then makes a statement about how His teachings relate to the Old Testament Law and Prophets. People often like to take Paul out of context and say Christians today have nothing to do with the Law, but that’s not what Jesus (or Paul, for that matter) taught.

Don’t think that I came to destroy the law or the prophets. I didn’t come to destroy, but to fulfill. For most certainly, I tell you, until heaven and earth pass away, not even one smallest letter or one tiny pen stroke shall in any way pass away from the law, until all things are accomplished. (Matt. 5:17-18, WEB)

The Greek word translated “fulfill” here means to fill to the fullest extent (G4137, pleroo). In other words, Christ’s coming crammed the law full of its intended meaning. Thayer’s dictionary says the word means “to cause God’s will (as made known in the law) to be obeyed as it should be and God’s promises (given through the prophets) to receive fulfillment.”

Clearly, Jesus still intends His followers to keep the commandments. Not only that, He tells them they have to do it better than the most legalistic religious leaders of their day. How on earth are they, or we, supposed to do that?

Jesus explains how to keep the commandments in a fulfilled manner by contrasting the way things had been done with the way He wants them done. We might think of it as the letter of the law contrasted with God’s spirit and intent behind the law. Or better yet, we can say Jesus is clarifying God’s purpose for the Law. For example:

It’s not enough to obey the law that says not to kill someone. Sin starts in the heart and that’s where God looks. He cares if you get to the point where you want to murder a person. Or even before that, since if you’re unreasonably angry with someone or despise them as an empty headed fool that’s enough to put you under judgement.

In short, Jesus’ expectations go beyond the Law. The goals of living in the spirit reach higher than living by a strict code. But the spirit and letter both come from God and are connected. So if we’re living in the spirit we are keeping the law on the way to becoming like God. Paul discusses this in Galatians, where he says, “walk by the Spirit, and you won’t fulfill the lust of the flesh” (Gal. 5:16, WEB).

Continuing in Galatians, Paul says, “if you are led by the Spirit, you are not under the law.” But right after saying that he lists sinful things that spirit led believers don’t do and says ” those who practice such things will not inherit God’s Kingdom” (Gal. 5:18-21, WEB). He’s telling us that if we do things that break God’s laws we won’t be in His kingdom even though the Law isn’t what saves us. He’s saying we keep the law because we’re walking in the spirit. It’s a side-effect of becoming like God. And so Christians today obey God, but they do it because they’re becoming like and following Him, not because they’re trying to make themselves righteous by their own power. It’s something we do on the way to eternity even though it’s not the method by which we get there.

Therefore you shall be perfect, just as your Father in heaven is perfect. (Matt. 5:48, WEB)