I was chatting on the phone with a friend on Friday and he asked me if I believed in fairy tales. I deflected the question onto, “What do you mean by ‘believe in fairy tales’?” Because it really is a deeper, more complex question than it seems on the surface. Usually, people think of believing in fairy tales as romantic daydreams all day long and a “happily ever after” at the end of every story.

But I’ve read fairy tales. In most of  them, you go through hell several times over before getting to a happy ending (see the Handless Princess tales for one example). And sometimes there is no happy ending at all and they end with death or maiming or losing everything you love (such as when The Little Mermaid dissolves into sea foam). 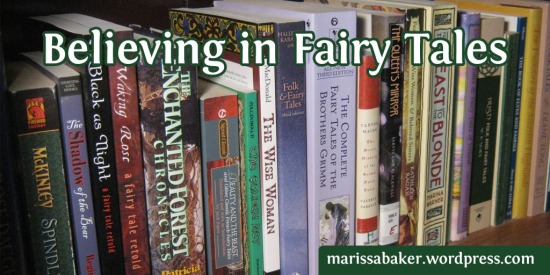 All too often, people dismiss fairy tales as out-dated children’s tales that teach things irrelevant to the modern world. I’ve heard the heroines are too passive, the dark tales too dark, the happy tales too unrealistic, the messages outdated. But I would argue the complicated nature of fairy tales is the aspect most relevant today.

Taken as a whole, fairy tales refuse to see life as easily explained. They present the strangeness, complexity, and downright cruelty of life in a stripped-down story form that refuses to be brushed aside. And many do earn their reputation for ending “happily ever after” because even after all the terrible things that happen they insist on hope. And that’s why I believe in fairy tales. I believe in the magic of storytelling, it’s power to hold a mirror up to our world, and our deep need for fantasy that illuminates reality. And I believe that in a world which refuses to make sense we need a hope that defies logic just as persistently.

4 thoughts on “Believing in Fairy Tales”