If you grew up

in a conservative Christian setting or the home-school community of the late 1990s and early 2000s, you mostly likely read I Kissed Dating Goodbye by Joshua Harris. After its release in 1997, it quickly became the go-to book in the courtship-vs-dating debate. If your friends didn’t hand it to you with an enthusiastic, “You have to read this book,” your mom probably thought it “would be good for you.” Or maybe you just picked it up on your own because of that suave guy on the cover tipping his hat (you know what I’m talking about, girls).

When I first read this book as a very “Christian” never-been-kissed teenager, all this courtship stuff seemed like a good idea. I mean, who doesn’t want a relationship guaranteed to lead to true love while keeping both God and your parent’s happy? The problem is, courtship doesn’t reliably work, and it gives you some pretty weird ideas to carry around if you eventually start trying to date like a semi-normal person.

Never Be Alone With A Guy

After reading I Kissed Dating Goodbye, my teenage self wrote up a list of things I would and wouldn’t do now that I knew the “right” way to interact with guys. Number 4 on my list was “ I will not put myself in a potentially compromising situation by being alone with a guy unless there are other people in the near vicinity.”

For us girls, this idea makes interacting with both married and single men awkward because you just know if you’re alone with them for any length of time you’re practically forcing them to have impure thoughts about you. This simply isn’t true, but having that idea in the back of your mind makes you feel guilty even in completely innocent situations. There are other concerns, though, such as what other people will think and the fact that you really don’t want to be alone with some people, so just use some common sense.

That cute guy or girl you walked past at the supermarket? the coworker who smiles at you every morning? They are not potential dating material. Girls, you’re are supposed to treat every man you meet just like you would your brother. If you even think about him as a potential boyfriend, you need to get your thoughts under control because you’re defrauding him and his future wife (who probably won’t be you). The reverse advice is considered true for guys.

There are several problems with this idea. 1) Even after being told how “wrong” this is, you still wonder (even briefly) if every attractive man or woman you meet is “the one.” The only difference is you feel guilty about it. 2) I’m perfectly comfortable leaning against my brother’s shoulder, looping my arm through his, going to him when I need help with something, and laughing and talking freely with him. That’s okay, because he actually is my brother. If I treat another guy like that, he’ll think I’m flirting and people will ask if we’re dating. 3) if you really do succeed in thinking of all your friends in a completely unromantic way, you’re less likely to pursue a romance.

Daddy Has To Approve

Ideally in courtship, a man will decide he wants to pursue a relationship with a girl he is friends with, and then he will ask her father for permission to court her. As a young teen, having parental approval before you go out on a date makes sense when you have involved, caring parents. But courtship extends this principle to any age, and it becomes more and more impractical as you get older.  If a girl plans to move out of her parent’s house, go to school, or work outside their home, she’ll end up interacting with men who’ve never even met her parents and who haven’t heard of courtship. Have fun trying to explain to a really great guy who just asked you out for coffee that he needs to talk with your dad first because there’s no such thing as a casual date.

Personally, I have a good relationship with both my parents and I want them to approve any man I marry or even seriously date. However, they haven’t met all the guys I know, and I’d be comfortable going out with a guy who hasn’t met my parents but is respected by our mutual friends. Other girls don’t have a good relationship — or any relationship — with their parents. Courtship gives the impression that if her father is not in the picture, the guy better hope there’s a male authority figure in her life to talk to because heaven forbid she make up her own mind about something like this.

Up until a couple is officially courting, they aren’t supposed to be alone or interact romantically in any way. Groups outings are the rule. Then as soon as they’re courting, they are set on the fast-track to marriage (it’s basically like an engagement, which makes proposals almost a moot point). Either you’re “just friends,” or you’re “exploring the possibility of marriage.” There’s no in between. 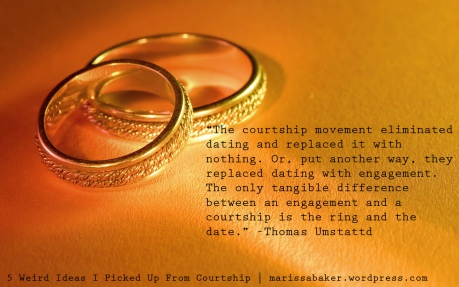 This brings us to a problem with courtship that underlies all the ones we’ve talked about already — courtship assumes that every interaction between men and women is extremely weighty. You can’t go on a casual date hoping to get to know someone better because courtship tells you  there’s no such thing as a “casual date.” You’re either friends, or you’re on the road to marriage.

Most people I know who’ve bought into the idea of courtship don’t actually get to the courtship part. It’s too intimidating of a commitment. When you leave courtship and try to date normally, though, you still have this idea that if a guy asks a girl out, that must mean he’s thinking of marrying her someday.

Courtship rules say absolutely no physical intimacy before you’re married. Depending on who you talk to, this even includes hand holding, hugs, or a quick kiss. Also, they add in the idea of “emotional sex” so that even having feelings for someone becomes wrong. Now, I do believe that God intends His people to save sex until marriage, but going to this extreme is a recipe for – you guessed it – more guilt.

People have written whole articles about how the teachings of physical and emotional purity from courtship books like I Kissed Dating Goodbye actually damage healthy relationships. You second-guess every hand-hold and shoulder touch, wondering if you’re sending the “wrong message.” You’re scared to fall in love because you don’t want to give pieces of your heart away to someone you might not marry, as if caring about someone leaves you with less capacity to care about someone else later (I wrote a whole post addressing this idea).

So what’s the alternative? The Christian community ran away from worldly dating for a reason, and those problems (like shallow short-term relationships and accelerated intimacy) are still there. But courtship didn’t give us a viable alternative. Instead, I rather like the idea of going back to a more old-fashioned version of dating (as suggested by Thomas Umstattd, whom I also linked to in the intro). Debra Fileta supports a similar idea in her book and website True Love Dates. It’s not perfect, and I don’t think relationships will every be easy, but at least it sounds better than courtship!

2 thoughts on “5 Weird Ideas I Picked Up From Courtship”