It always intrigues me how certain characters attract so much investment from viewers. Browsing Pinterest lately, it seems like Bucky is the new Loki — the Marvel fandom’s dark, mistreated character who just needs a hug because we love him soooooo much. In Bucky’s case, the reasons why we find his character compelling aren’t too hard to find. He’s a good man who was forced to do terrible things and is now constantly fighting a battle to be himself. Sebastian Stan’s portrayal allows audiences to glimpse Bucky’s human side under the soldier persona he wears and the assassin role he’s forced to adopt, and audiences are drawn in by a realistic, sensitive portrayal of a compelling character.

We only get about 13 minutes of footage with Bucky in the first Captain America film. Here it is:

These scenes reveal a character in line with type descriptions of ESTPs as people characterized by decisive action, contagious energy, and enjoyment of being in the moment. They are “thrillseekers who are at their best when putting out fires, whether literal or metaphorical. … They assess situations quickly and move adeptly to respond to immediate problems with practical solutions” (Truity.com description). David Keirsey writes that ESTPs (whom he nick-names Promoters) “live with a theatrical flourish which makes even the most routine events seem exciting. … Promoters demand new activities and new challenges. Bold and daring at heart, and ever-optimistic that things will go their way, Promoters will take tremendous risks to get what they want, and seem exhilarated by walking close to the edge of disaster.”

ESTPs lead with a mental process called Extroverted Sensing, or “Sensation.” This process “can get into the action in the moment. Think of it as ‘real-time kinetic’” (from Personality Hacker). It’s a fun-loving function that delights in sensory experiences, such as Bucky spending his last night in New York dancing with girls he probably doesn’t care whether or not he ever sees again. On that same night, he and Steve are talking about Steve’s inability to enlist and he says, “I don’t see what the problem is. You’re about to be the last eligible man in New York.” He’s trying to make Steve feel better with joking and doesn’t really ‘get’ the duty-fulfilling and self-sacrificing aspect of Steve’s character. It’s not a deeply ingrained aspect of his personality type (like it is for ISFJ Steve), though in practice he still does his duty and sacrifices himself because he’s a loyal friend and a good man. 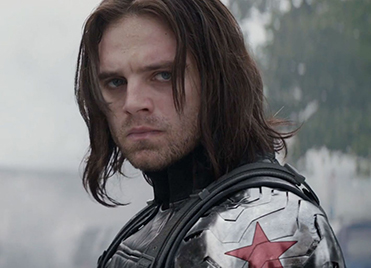 We also see Bucky demonstrate sensory skills in more serious situations. Even post-experimentation and groggy when escaping Redscull’s prison, Bucky could walk across that metal girder with coordination, balance, and no hints of fear other than a healthy caution. As a Howling Commando, we see him as a sniper (which requires skills that come naturally to SP types) and making split-second sensory decisions with ease in the final train fight.

ESTP types support their Sensation function secondary with Introverted Thinking (or “Accuracy”) and then tertiary Extroverted Feeling (or “Harmony”). These mental processes describe how ESTPs, like Bucky, make decisions. First he’s using impersonal criteria to evaluate information and make decisions that are motivated by his own understanding of how the world works. Extroverted Feeling gives ESTPs an insight into other people that they stereotypicaly use to be charming and get people to do what they want. When he tries to ask Peggy to dance, he’s clearly not used to being ignored in favor of his friend (or any other guy). ESTPs are not primarily an emotional sort of people, though. In an early scene, Bucky had just had an argument with his best friend and turns that emotionally invested side of himself ‘off’ to take the girls dancing and enjoy himself.

Once Hydra turns Bucky into the Winter Soldier, it’s difficult to use any scenes to get a clear picture of his personality type. In Captain America: The Winter Soldier we see a few glimpses of the real Bucky trying to get out, but not really anything to help with typing him. In Civil War, however, his own mind is starting to reassert itself and we can talk about his personality type in that film.

When ESTPs are stressed, one of the most common things they experience is internal confusion. They feel out of control, forget details, and become paranoid. Their inferior, or 3-year-old, function is Introverted Intuition (also called “Perspectives”). It’s a mental process that speculates on things that cannot be known, which is great for creativity and insight if you’re using it as a driver process but not so good if it’s an underdeveloped function that comes out when you’re stressed. Most ESTPs snap out of what Naomi Quenk calls a “Grip experience” (where stress causes your inferior function to assert itself) fairly quickly, but “Chronic grip behavior can lead the individual and others to believe that he or she is typically negative, pessimistic, and worried about both the present and the future” (Was That Really Me? p.180). Add to that all the torture and brainwashing used to turn Bucky into the Winter Soldier, and you have the Bucky who’s fighting alongside Cap in Civil War.

Here, we see a man who is not only fighting physical battles (and with extraordinary skill now that super-soldier enhancements have been added to his natural sensory abilities), but who is also fighting a mental battle. As extroverts, ESTPs tend to focus more on the external. Bucky’s experiences have turned him inward, making him more serious and forcing him to develop his Introverted Thinking side. Though type theory holds that your base personality doesn’t change, Bucky is in many ways a different person than the one we see in The First Avenger. He’s burdened with the weight of what he’s done and his friend Steve is now his only real connection with another human being.

In some ways, Bucky’s joking remark from the first Captain America movie “I’m turning into you” has come true. He’s become much more introspective and aware of the weight of his actions. Yet he’s also still thoroughly himself. We have a scene where he and Cap are reminiscing about fun times they had and a girl Bucky tried to impress, and he’s really Bucky against instead of the Winter Soldier. The fun-loving young ESTP is still in there, just buried deeply under the weight of all he’s been though.

In The First Avenger, we see Bucky fighting to protect his best friend and giving his life for his country. Now in Civil War, he trusts his best friend to help him through and gives up his freedom by going into cryostasis so he’s can’t be used to hurt others. Bucky’s decision to enter cryostasis at the end of the movie is also an intensely individualistic move that’s characteristic of SP types. If he can’t guarantee he can control himself, then at least he can make sure no one else can take control of him either.