It’s been a year since I first started really digging into 1 Corinthians 11 and began wearing a head covering when I attend church services. I’d been wondering about 1 Cor. 11 for years, but hadn’t really looked into it all that deeply. None of the explanations about why we don’t cover today satisfied me, but I didn’t feel I had a good enough argument in favor of covering to go against my church tradition. I’d discussed it with a few women in my congregation, but they seemed confused by the passage and had decided that your hair is your covering and the “we have no such custom” phrase meant veiling/covering in church wasn’t necessary today. 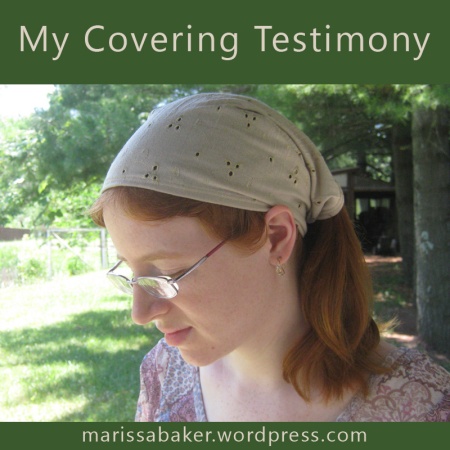 Then a year ago I stumbled upon The Head Covering Movement through a blogger. Here was a group who took this passage seriously. They were ready to talk about what “because of the angels” might mean. They engaged directly with a variety of arguments against covering in a respectful way solidly rooted in scripture and history. They even had a good explanation for the phrase “we have no such custom.”

How I started covering

My first reaction was to talk with my mother, who was suspicious of the whole idea. I then reached out to a friend who’d been sending me “rants” about scriptures that didn’t make sense to him. My own “rant” went something as follows: “should I start wearing a scarf because this makes sense to me? or did I miss something in their interpretation of these verses that I shouldn’t agree with? Maybe my mother’s right that it’s not a big deal and it would be too distracting to people around me in church.”

Even before I heard back from him, I wore a wide headband to church that Sabbath. I thought it was big enough to count as a covering, yet not something I hadn’t worn before so it wouldn’t attract much attention. A few days later, my friend wrote something that helped confirm my decision: “It is good that you’re mindful of not causing a ruffling of feathers among fellow congregants, but we can only control so much of other people. … So, I would just encourage you to follow your conviction wherever that leads you. If people have a problem, it is their Christian duty to confront you about it, and I doubt anyone would still have a problem with you/your apparel upon inquiring about your intent in doing so.”

My friend is a smart man. I’d already taken baby-steps toward covering, but his encouragement was reassurance that I wasn’t just going “off the deep end.” I ordered my first cover from Garlands of Grace on July 15 (pictured in the featured image), and started building a collection of head scarfs. Since then, I’ve only had one person in the United Church of God groups I attend ask about the fact that I cover my head, but at my Messianic group there are a few other women who cover and the topic comes up more often. I’ve received compliments on how I wear them, as well as on the fact that I’m covering. One person said, “I appreciate that you wear a cover when you dance.” I’m not doing this to seek attention of course, but for someone whose love language is Words of Affirmation this support was invaluable.

In terms of scripture, the passage in 1 Corinthians 11:1-16 is the main support for the practice of Christian head covering. A few other scriptures tie in to it (such as Num. 5:18 instructing the priest to uncover the head of a woman accused of adultery), but this is the only place where it’s focused on. You can check out The Head Covering Movement for more in-depth analysis, but here’s what convicted me that covering is for the church today:

On top of those reasons, the arguments most people use against head covering are, for me, an argument in favor of it. They say it was a strictly cultural matter that no longer applies — that in Corinth, only prostitutes went about with uncovered heads and we don’t want to be mistaken for prostitutes. But Paul mentions no such thing and when we start throwing out commands because we think they’re strictly cultural we’re on a very slippery slope. On top of that, historical evidence shows the prostitutes referenced in this argument belonged to a Corinth of about 200 years before Paul’s writings and art of the time shows respectable women both covered and uncovered. The covering Paul talks about wasn’t based on a Greek or Roman practice (or even a Jewish practice, since both men and women covered in Judaism).

In reality, history shows us that head covering was practiced unanimously among Christian women for centuries. I hate to cite Wikipedia as a source, but in this case their article on Christian headcovering throughout history is unusually well-researched and more thoroughly cited than many other articles I’ve found online. Until a little over 50 years ago (with the sexual revolution and the feminist movement gaining traction), covering was the norm in church and often in public as well. Even fairly recently, no respectable lady would leave the house without a hat of some kind and she was expected to keep it on during church services. If you’re looking closely, you’ll notice this in well-researched historical dramas. Last year’s film Brooklyn, for example, was set in 1951 and ’52, and you’ll see Eilis removing a veil as she leaves a church in one scene and another scene where she’s wearing a pink cover at church.

While I don’t like to seem as if I’m pushing the notion of headcoverings on other people, I am doing this for a reason and a year of covering has only confirmed my choice. My encouragement to you today is to just take a closer look at this passage of scripture, and not to ignore it because we’re not sure what to do about it. Don’t start covering just because someone tells you to — study it and see if you’re convicted. And if you are, then don’t be afraid to start covering in church. Sure some people will probably think it’s strange, but as my friend said, “we can only control so much of other people.” If you’re convicted that you should be covering at church, then you’re doing it for God and not for what other people think (though you do want to try and avoid offending our brethren by how we practice covering).

Now, I don’t mean to sound like covering has been without its struggles or that it wasn’t a little weird at first or that I don’t still have questions. For example, how often to cover is still something I’m not clear on. I’m convicted of covering at church services (which is all The Headcovering Movement sees as necessary), but “praying and prophesying” could apply to other times as well. Do Bible studies count? What about dance practice, since the dancers pray as a group and sometimes I’m asked to pray aloud? I cover at home when praying in private, but should I cover for blessings on meals? or when writing these Sabbath blog posts, since that’s a sort of prophesying/inspired speaking? I’m not sure.

While thinking these things over, I’m keeping in mind that we can’t turn this into a legalistic thing, and I do think God hears prayers of uncovered women. Covering should be a way of honoring God, never something that stands between us and our Lord. But if it is indeed a command, and I believe it is, then it’s meant for our good, and that has been my experience. I’ve found that covering draws me closer to God and reminds me that I’m here to worship and to honor the Lord.

17 thoughts on “Why I Cover My Head In Church”