Back in February, I read an article on Bible Gateway interviewing Curt Landry about his new book Reclaiming Our Forgotten Heritage: How Understanding the Jewish Roots of Christianity Can Transform Your Faith. As a Messianic believer, I was excited that a book about appreciating the Jewish roots of our faith was being released by a mainstream Christian publisher like Thomas Nelson.

I didn’t get to read the book until recently because I was distracted by other new releases, some of which I had advance reader copies to review, and I was waiting for a library to buy it. I finally got a copy through an inter-library loan program and eagerly sat down to read. Unfortunately, while this book contains some really good content, I felt like it was too much about Curt Landry and not enough about its stated purpose of helping people understand how the Jewish roots of Christianity can transform their faith.

When Jesus arrived here on earth (or Yeshua, to use His Hebrew name), He didn’t come to bring a new religion. Yeshua came as the next stage in God’s plan which He’d laid out from the foundation of the world. What we now call Christianity has its roots in the faith of the ancient Israeli people and the Jews of Jesus’ time. Though this phrasing is mine, this is one of the main arguments of Landry’s book and it’s the part I found most fascinating.

Mainstream Christianity is in the midst of what Landry calls an identity crisis because we’ve fallen out-of-touch with the roots of our faith. He compares us to spiritual orphans coming to God in the midst of a “post-Christian era” with little connection to previous generations of believes and the true foundation of our faith. This is true even of many churches with a centuries-long history because the disconnect from our roots happened comparatively early in the history of Christianity.

The Jesus Christ we worship today started out as Yeshua, the Messiah promised to the Jewish people who would also open up salvation to nations other than Israel. To reconnect with the version of Christianity that Yeshua’s disciples practiced — and our identities as believers in the one true God — we need to go back to the Jewish roots of our faith. 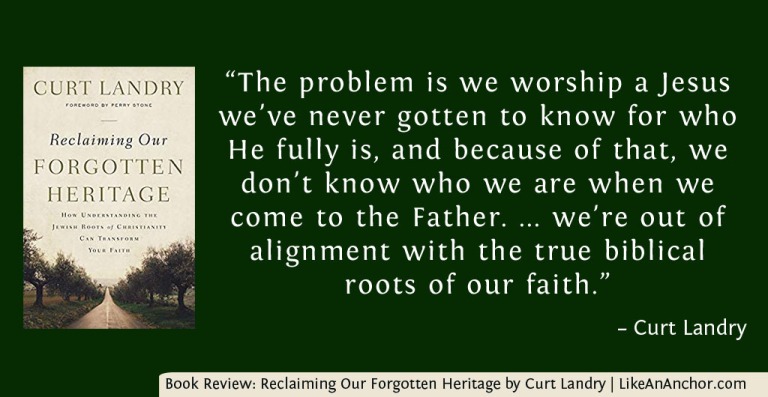 My favorite chapter from Reclaiming Our Forgotten Heritage is titled “Our Stolen Heritage.” This entire chapter traces changes made within the first few centuries after Yeshua’s death that Romanized the church and disconnected Christianity from its roots. This and the following chapter are what I wished we got more of in the rest of the book — a more focused look at where these Jewish roots were lost and what they mean for the church today.

The First Council of Nicaea in 325 A.D. cut off the Jewish calendar which set dates for the holy days. This included replacing Passover (a holy day Jesus explicitly instructed us to continue observing in remembrance of Him) with Easter. The Council of Antioch in 341 prohibited Christians from keeping Passover with Jews and the Council of Laodicea in 363 barred Christians from keeping the Sabbath on Saturday (p. 148-50). They stripped away things that Yeshua and His disciples all did, replacing them with human traditions (something that Jesus said made worship of God empty).

This chapter is followed by another titled “One New Man” which continues to focus on the covenant blessing that come to Christian believers when we embrace the Jewish roots of our faith. Essentially, to worship God as He desires we must go back to the way things were done before Roman church leaders centuries after Jesus cut the church off from the practices Yeshua and the apostle’s participated in. Those include the 7th day Shabbat, Biblical holy days such as Passover, and much more. 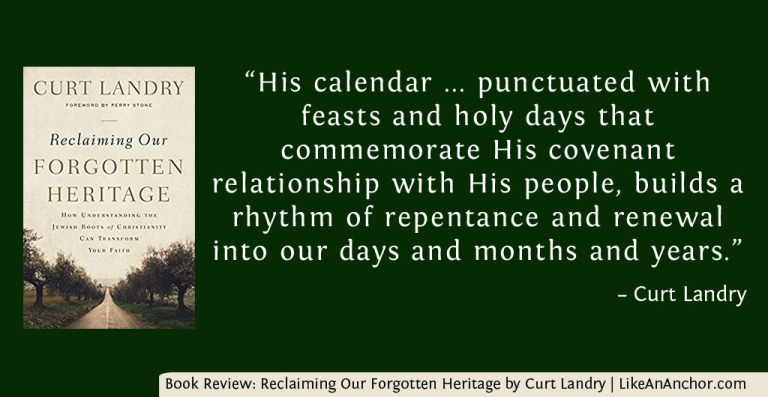 Criticisms of the Book

Landry’s personal testimony is an interesting and inspiring one. And his discovery of his own heritage as someone who was adopted as a baby, then learned later in life that his birth mother was Jewish is similar to the journey a Christian might have while discovering the Jewish roots of their faith. However, I didn’t need half the book to be about Curt Landry. The subtitle promises this book will be about How Understanding the Jewish Roots of Christianity Can Transform Your Faith, not about how discovering his Jewish roots transformed Curt Landry.

For about the first half, he spends most of each chapter sharing his personal journey and then adding some information about how this relates to our journeys as Christians. With the exception of the two chapters mentioned above, for the second half he starts the chapters with something remarkable he is doing in his life (using his spiritual gifts, teaching to thousands, managing large-scale projects in Israel) then talks about how God wants us all to similarly prosper and pass on a legacy to those after us. Eventually it started to read like he was bragging about his own gifts and prosperity. I doubt that was his intent, but he could have talked about faith, shalom, multiplication, and leaving a legacy without spending so much time “tooting his own horn.”

Another worry I have related to this book is that Landry sends mixed-messages regarding the importance of doing what God has commanded His people to do. For example, Landry makes the statement “A biblically cultured family is one that lives in synergy with God’s ways, God’s calendar, and God’s culture” (p. 75). He emphasizes that we are recipients of all God’s covenants and that our belief in Him should motivate us to follow God’s ways because He “does not want us changing His word and thus changing His instruction” (p. 124). But latter Landry backs-off from this stance, saying of Passover, “While this issue is not one that denies salvation to believers, it is an area where the Christian church has been robbed of the heritage blessing of putting our feet under the Father’s table” (p. 150). 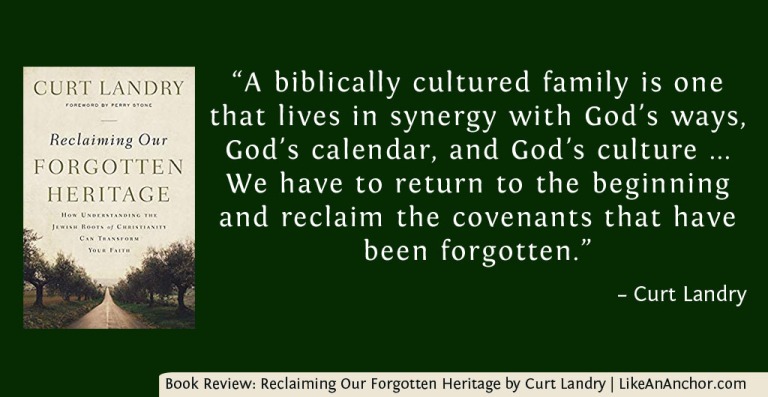 Let’s be very clear. Our salvation is not based on works — it comes by the grace of God through the sacrifice of Messiah Yeshua. Salvation should result in action, though, because it involves grafting us into God’s covenants (something Landry does point out). As Paul says, “we are his workmanship, created in Christ Jesus for good works, which God prepared before that we would walk in them” (Eph. 2:10). We’re meant to do something in response to salvation and that “something” is to follow God faithfully and do what He tells us.

Do you need to do things perfectly or know everything in order to receive salvation? No! “If you will confess with your mouth that Jesus is Lord, and believe in your heart that God raised him from the dead, you will be saved” (Romans 10:9). But once we’re saved it should be impossible for us to continue walking in sin as if nothing had happened (Romans 6). If we know (and not everyone does yet) that keeping God’s holy days, weekly Shabbat and other commands is what He wants, then it becomes sin for us if we don’t do that (James 4:17).

The yearly observance of Passover (to use the same example Landry did) might not be a salvation issue in and of itself, but rebellion against God’s commands once we understand them is a salvation issue. Landry shies away from saying that, instead opting for a compromise where people can choose to participate in God’s covenants or not even after they understand them and still be alright with Him. But covenants are how God relates to us, and we need to do things God’s way in order to have a relationship with the Father and Son.

As teachers of the Word, we do no one any favors by telling them they don’t really need to do God’s will or embrace the fullness of their faith in the Messiah. Jesus said, “Not everyone who says to me, ‘Lord, Lord,’ will enter into the Kingdom of Heaven, but he who does the will of my Father who is in heaven” (Matt. 7:21). Lip-service isn’t enough. We have to know Him and be known by Him, and that involves aligning with Him as best we know how. 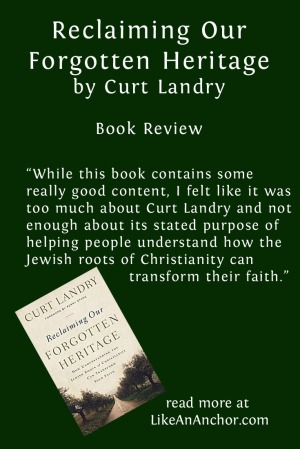 This book raises some excellent points and can serve as an introduction to the topic of Christianity’s Jewish roots. But while Landry has an incredible and inspiring story, I wasn’t expecting it to take up nearly half the book nor for him to fill the pages with antidotes of his success that eventually started to sound like bragging. I quickly tired of the “look at me and all God has given me” tone.

The emphasis of this book felt backwards. I’d expected to learn about the Jewish roots of Christianity with Landry’s personal story used as an example. Not to read a memoir with Curt Landry as the main focus, but which also included information about our Jewish roots. I also worry that Landry sent mixed messages, saying in one place that following God’s instructions is what aligns you with Him and then saying in another that you don’t really have to do any of this to have a relationship with God. If we truly care about following God, then we should seek to align ourselves with Him and His way as revealed in scripture, worshiping “in spirit and in truth” as Yeshua told us to.