Last week, I updated an old post called The Missing Disney Princesses with a brand new MBTI Chart featuring the 14 official princesses (well, technically there are 11 official princesses, plus Anna and Elsa who have their own line, and Moana who hasn’t been crowned yet. So it was more like the “Official + New/Popular Princesses Chart”).

There are other Disney women, though, who’ve been completely snubbed by the Disney princess line-up and I wanted to include those as well. I had them on a separate chart in my previous post and I wanted to follow that pattern this time as well. Eilonwy and Alice were the most requested characters I left out last time, so I’m adding them. And I’ve also added a character no one asked about from my favorite underappreciated Disney films — Maid Marion from Robin Hood. 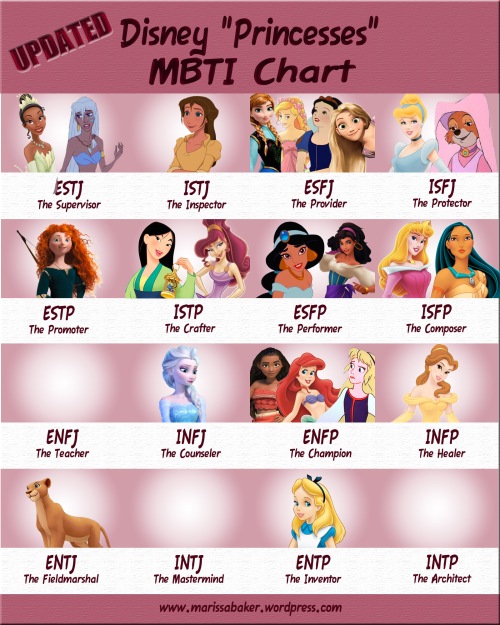 Note: I’m not using anything from sequel films (just to help narrow-down the typing choices), so that’s why you won’t see Ariel’s daughter Melody (for example). I also type using cogitative functions. If you’re not familiar with that aspect of Myers-Briggs theory, click here and here for a two-part introduction. Read on for detailed explanations for why I chose these types for the unofficial princesses, and click here for the post about the other princesses.

END_OF_DOCUMENT_TOKEN_TO_BE_REPLACED

A couple years ago, I made a Myers-Briggs chart called The Missing Disney Princesses that quickly became one of the more popular posts on my blog. Now (finally!!!) I get to update it to include our new princess, Moana.

But I’m not just adding Moana to my chart. I’m also moving around a few of the other princesses. Last time, my focus was on showing that we don’t see all the personality types represented by the Disney princesses. Both Intuitive and Thinking types are under represented among Disney’s ladies. That’s still the case, but this time my focus is on explaining why I typed each princess the way I did.

In the two years since publishing the last chart, I’ve learned more about Myers-Briggs typing. I’ve also re-watched several of these movies, considered comments from readers on the previous post, and asked advice from fellow personality type and Disney enthusiasts. In response, I’ve re-typed several characters (which is noted and explained in the individual character discussions). 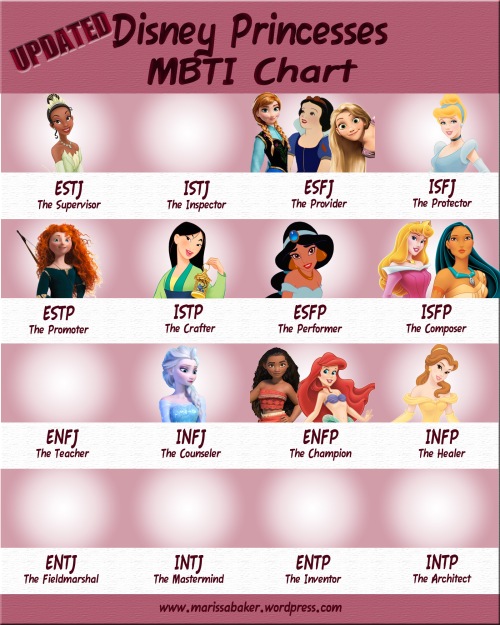 Note: I type using cogitative functions. If you’re not familiar with that aspect of Myers-Briggs theory, click here and here for a two-part introduction. Read on for detailed explanations for why I chose these types for each character. END_OF_DOCUMENT_TOKEN_TO_BE_REPLACED 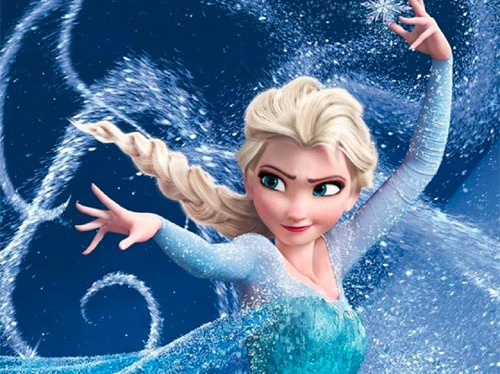 It’s been more than 7 months since Disney’s Frozen hit theaters, but the conversation about it shows little signs of dying down. There are still people on my Facebook feed warning about how the insidious messages of “Let It Go” are damaging our little girls, as well as people finally giving into peer-pressure to see the film and subsequently describing “Let It Go” as the most empowering song ever. I’ve seen articles calling Frozen “the most Christian movie that I have seen this year,” and articles describing “Let It Go” as an occult anthem. What is it about this film that catches people’s attention so strongly, and results in such polarized viewpoints?

There are plenty of articles talking about how “Let It Go” fits into the context of the film Frozen. I particularly like NaClhv’s articles An analysis of “Let It Go” in Disney’s “Frozen” and Elsa’s facial expressions during “Let It Go”, in Disney’s “Frozen”, which talk about how “Let It Go” is more of a running-away song than an empowerment song. In this analysis, Elsa’s song represents a turning point for her character. We see her both depressed and happy, with the potential to grow and become a good ruler or to become an evil Ice Queen. It is a dangerous moment for her, but she is also a deeply sympathetic character. Who hasn’t wished that running away could make things all better?

Even people who hate “Let It Go” will sometimes admit there’s no problem with the song in the context of the film. But they then argue that the context doesn’t matter because it is being sung and played out of context. Joseph Clarkson writes that “when removed from the context of the movie, the song concludes that rebellion and relativism lead to freedom.” And I will admit that I can see how people think that, particularly in connection to the “no right, no wrong, no rules for me” line. Still, several people who are advocating examining this song out of context are also speculating about the motives of the writers. Remember that article I mentioned about the occult in my intro? That blogger states, “This is hardcore occultism. But we didn’t catch it did we. The language does appeal to those who are familiar with the terms though, and if you don’t know the jargon it goes over your head.” The implication is that the writers of Frozen know the jargon and are purposefully slipping these occult references in.

Now, I don’t know anything about the writers of Frozen. That may have been their intent. (For an argument from that point of view, I do encourage you to read the article I’ve been quoting. The writer is very sincere, and reading this will give you context for her statements as well.) But when we’re talking about a writer’s intention, we can’t take the song out of context because it was written to fit within the film’s entire plot. And the overall film shows that “Let It Go” isn’t Elsa’s end point. The very next scene Elsa appears in shows that she hasn’t actually been freed from her fears, and that running away hasn’t protected people from the powers she started embracing in “Let It Go.” The blogger I’ve been referencing connects the phrase “let it go” with the fact that “the greatest command of occult is ‘Do what thou wilt shall be the whole of the law’ (The Law of Thelema, Crowley).” What the writers connect “Let It Go” to is the fact that Elsa needs to find a way to fit who she is into the larger context of society. “Let it go” isn’t a cure-all or the intended message of the film. Elsa tried making her will the only law, and discovered it didn’t work. The real answer was love, which is actually more of a Christian message.

There is no fear in love; but perfect love casts out fear, because fear involves torment. But he who fears has not been made perfect in love. (1 John 4:18)

I do not consider Frozen a Chrisian film. I wouldn’t even go so far as to say there are overtly Christian overtones. I do, however, think it’s a decent film which contains good messages that can be associated with Christianity because of their positivity. The film also has some less-positive content which can send a wrong message, like That Weird Sexy-Makeover Moment at the Heart of Frozen’s “Let It Go” or possibly the homosexual overtones that a few people who haven’t even seen the movie are talking about. Still, overall, I agree with Plugged-In reviewer Paul Asay’s response that Frozen “actually offers a ‘responsible and family friendly’ message.” One other thing I take issue with is that so many writers who are talking about the potential Christian themes in this film hate Elsa and love Anna. Why does a 21-year-old expressing some independence for the first time in her life mean she should be compared to Satan, but an 18-year-old who becomes engaged to a man she just met and irresponsibly leaves the kingdom in his hands gets labeled as a Christ-figure? In this view, Elsa’s the sinner and Anna’s the redeeming saint, never mind that Anna’s act of love thaws her own frozen heart (thus saving herself more than her sister, who could have easily stopped Hans) and Elsa independently chooses to use an act of love to save her kingdom. 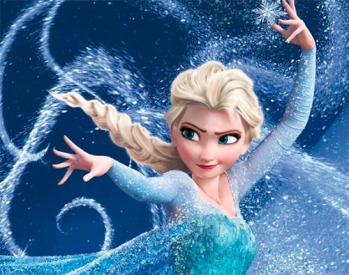 I think one of the reasons Elsa is misread by so many people is because she is an INFJ. Hovering around 1% of the population, the INFJ is the rarest Myers-Briggs type. On top of that, the effects of her childhood stress means Elsa’s type isn’t immediately recognizable even to other INFJs.

Even stable INFJs with a normal childhood report feelings of alienation that comes from being different than the rest of the world (Read my post “Things You Should Know About INFJs” for more on that). The thing about Elsa is that she didn’t have a normal childhood. She learned to use her introverted side — intuition — but was told to”conceal, don’t feel,” which made her try to suppress her feeling side. INFJs use “their second function, Extraverted Feeling (Fe), which can serve as a useful extroverted tool for navigating the outside world” (from Personality Junkie’s INFJ profile). This effectively crippled her for dealing with other people in a healthy way (it would have been much better to send her to Xavier’s School For Gifted Youngsters, but sadly that isn’t an option outside of HISHE). Elsa’s Fe is why you might see her mistyped as an ISFJ duty-fulfiller, since young Fe types try to fit in with the expectations of people they look up to (in this case, Elsa’s parents) and typically try their best not to hurt anyone. But once you see Elsa run away and reveal the introverted side she’s been nurturing in her prison, you see Introverted Intuition (Ni) surface rather than Introverted Sensing (Si). Si is experiential and fact based, and enjoys rhythm and reliability. Ni is more like this description from Personality Pathways.

Introverted Intuition reflects on patterns, relationships, symbols, meanings, and perspectives on matters from complex phenomena to magical connections to practical problems. The Introverted Intuitive mind typically creates a unique vision and arrives at unique insights about things, phenomena, or people. It strives to discover the essence of things and fill in the missing pieces of a puzzle. Introverted Intuitive types frequently will have complex visions or perspectives that they are unable to explain with clarity to others.

The sentiments expressed in “Let It Go” are typical for INFJs as they mature and learn to embrace the aspects of their Ni that sets them apart from other people. From that perspective, Elsa progresses from a “kingdom of isolation” in the first verse, to breaking free of social rules (INFJs will stay within rules that make sense, but don’t want confined by ones that do not), and finally rising like the break of dawn to become who she is inside rather than the “perfect girl” image that other people have in their minds. It’s not really all that dissimilar to the songs “The Orphan” and “Sweet Liberty” from the musical Jane Eyre, which was written for another fictional INFJ. Elsa’s problems aren’t just specific to INFJs, though, as pointed out by One Dad’s Thoughts on Frozen’s Smash Hit “Let it Go.” Elsa’s song and character arc resonate with girls, particularly teen girls, who are struggling with swirling storms of emotions and feelings of alienation.

Frozen is a typical Disney children’s movie in as much as Anna’s story line is concerned, but Elsa’s storyline explores Young Adult novel themes like coming-of-age, self-discovery, and yes even that sexualized transformation at the end of “Let It Go” (which, seriously, isn’t that bad. She’s 21 years old for crying out loud and it’s a cute dress. I’d wear it).