In Genesis 29, we’re briefly introduced to a woman who plays a key role in Biblical history. Though she is largely overlooked, her legacy shaped the religion we now call Christianity in fascinating ways.

Now Laban had two daughters: the name of the elder was Leah, and the name of the younger was Rachel. Leah’s eyes were delicate, but Rachel was beautiful of form and appearance. (Gen 29:16-17)

The matriarchs of Genesis see themselves as filling their godly role when they have children who grow up to play key roles in Biblical history. These women are heroes of motherhood as well as of faith. They have their own speaking lines, personalities, and relationships with God, but they’re typically remembered in terms of the children they raised.

Leah mothered 6 of Jacob’s 12 sons, as well as the only daughter recorded for any patriarch. Her sons Levi and Judah were the ones God used to found lines of priests and kings. Though the story of Rachel and her son Joseph overshadow the other sons in Genesis, kingship and priesthood play a huge role in God’s plan and there’s much we can learn from Leah’s take on the birth of her sons.

“Be Attached To Me”

Levi was Leah’s third son. We have no record of Jacob’s involvement with his sons until they were much older, and what we learn of this new baby all comes from his mother.

She conceived again and bore a son, and said, “Now this time my husband will become attached to me, because I have borne him three sons.” Therefore his name was called Levi. (Gen 29:34)

The word translated “attached,” lawa (H 3867), has two main meanings. The one used here refers to joining “an item or person to someone or something else. Most significant theologically is its usage to refer to foreigners who join themselves to God’s people as converts” (Theological Wordbook of the Old Testament, entry 1087). Leah’s remark could also be translated “My husband and I shall surely be united [or joined]” (TWOT, entry 1093a).

The Lord (likely) alludes to Leah’s words in Numbers when describing the priests’ and Levites’ duties. He tells Aaron, “bring with you your brethren of the tribe of Levi, the tribe of your father, that they may be joined with you and serve you while you and your sons are with you before the tabernacle of witness” (Num. 18:2). Levites joined to the priesthood could minister within the tabernacle, but not at the altar or with the vessels of the sanctuary (all priests were Levites, but not all Levites were priests) (Num. 18:3-4). 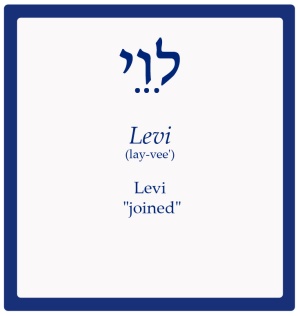 For centuries, Levites and the Levitical priests were among the most influential people in Israel and Judah.  They were the only ones allowed to minister before God. Others could “join themselves to the Lord,” even strangers outside Israel (Is. 56:3, 6-7), but with very few exceptions they couldn’t minister before Him or get as close to His presence as the priests and Levites. Now that the Levitical priesthood has been superseded by Jesus Christ as High Priest after the order of Melchizedek (Heb. 7:1-17), we all have the opportunity to join ourselves to the Lord.

Lean named her son Levi as a prayer for intimacy with her husband on every level. She didn’t want to be separate and disconnected from Jacob, but there wasn’t anything she could do on her own to bridge that gap. Similarly, humanity was separated from union with God and couldn’t do anything about it until the priesthood changed. Before that, people went through the Levites to approach God. The Levites were a reminder that we wanted unity with God, but couldn’t have it on our own. Now, we come straight to Jesus Christ as part of His body, a “holy priesthood” united with Him as our espoused husband (1 Pet. 2:5; 2 Cor. 11:2).

There aren’t any verses between the record of Leah giving birth to Levi and the birth of her fourth son, Judah. It appears something changed during that time, though, if not in her circumstances then in her relationship with God.

And she conceived again and bore a son, and said, “Now I will praise the Lord.” Therefore she called his name Judah. Then she stopped bearing. (Gen 29:35)

The word for “praise” is yada (H5034) and it primarily means to acknowledge or confess. It was used of confessing sin, but in the sense of praise it means “to express one’s public proclamation or declaration (confession) of God’s attributes and his works” (TWOT, entry 847). Yada is seen as a key word for the type of praise where people acknowledge who God is and the marvelous things He does. It often appears in the psalms of David, one of Judah’s most famous descendants.

I will praise You with my whole heart; before the gods I will sing praises to You. I will worship toward Your holy temple, and praise Your name for Your lovingkindness and Your truth; for You have magnified Your word above all Your name. … All the kings of the earth shall praise You, O Lord, when they hear the words of Your mouth. (Ps. 138:1-2, 4)

When the angel Gabriel told Mary she would be the mother of the Messiah, he said “the Lord God will give Him the throne of His father David. And He will reign over the house of Jacob forever, and of His kingdom there will be no end” (Luke 1:32-33). Jesus Christ inherited the kingship covenant made with David (fulfilling promises made to Judah in Gen. 49:10) and, like the other covenants, offers us co-inheritance with Him.

We’re told that Jesus “loved us and washed us from our sins in His own blood, and has made us kings and priests to His God and Father” (Rev. 1:5-6). We’re also joined to God as a “a royal priesthood” so “that you may proclaim the praises of Him who called you out of darkness into His marvelous light” (1 Pet. 2:9). Even now, thousands of years after Leah named her third and fourth sons, we’re seeing that heritage play-out on a spiritual level, and we’re even playing a role in it because Jesus shares His inheritance with us.