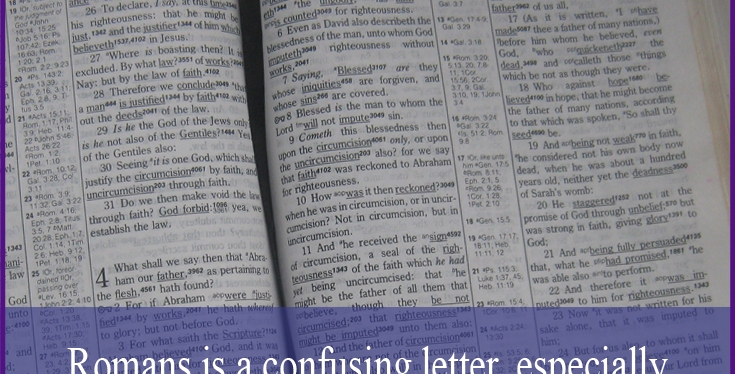 We’re going to talk about all of Romans in one blog post. That looks like a crazy idea as I type it, but I think sometimes when we zero-in on just one section of Paul’s letters we miss the bigger picture of what he’s trying to say. Perhaps there’s merit in studying overall messages as well as minute details.

Romans is a confusing letter, especially when you read pieces out of context. To really get a sense of what Paul is trying to say in any given chapter or verse, we have to read the entire letter. That’s true of any book in the Bible, but I think it’s more true for Romans since Paul connects his arguments so closely. Especially in the first half of the letter, he frequently makes a statement that could lead readers to make an incorrect assumption, then he asks that assumption as a rhetorical question and refutes it. 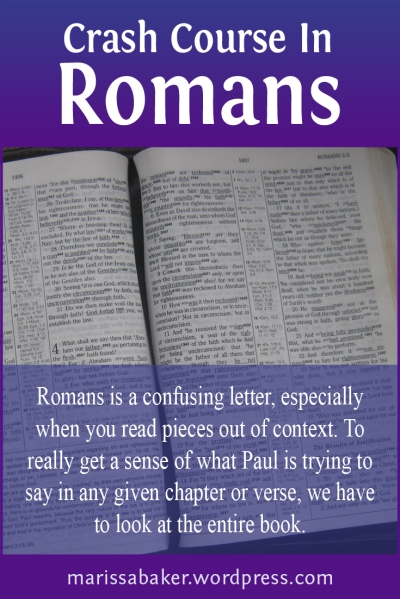 Also, even though we’ll stay mostly in Romans, it’s important to remember Paul wasn’t writing in a void. Reading Romans (or any other book of the Bible) by itself can lead to misinterpretation. We must frame our understanding of this letter in light of the Old Testament (the only scriptures around for Paul to reference) and the teachings of Jesus (for Paul would never contradict our Lord’s words). Doing that well would take a book instead of a blog post, but last week’s post serves as an good introduction to this one.

Romans opens with a discussion of “ungodliness and unrighteousness” which brings people under the judgment of God (Rom. 1:16-32). This applies to all people since even if they didn’t receive a special revelation from God (as ancient Israel received God’s Law) they still can see evidence of Him in creation and can be held accountable for aligning with general moral principles God built into the world. Paul then takes his readers to task not, as some assume, for keeping the Law but rather for teaching it and then acting in a way that dishonors God (Rom. 2:1-29). Paul indicates that the more you know about God’s law, the more accountable you are to do things God’s way.

After saying, “not the hearers of the law are just in the sight of God, but the doers of the law will be justified,” Paul shifts to explaining that even if you do keep the Law you’re still “under sin” because we’re not perfect. He also says it is righteous with God to judge the world, which is guilty before Him because the Law gives knowledge of sin and cannot justify us in God’s sight (Rom. 3:1-20).

This seeming contradiction (doers of the law will be justified vs. the law cannot justify us) leads to discussing how we are “justified freely by His grace through the redemption that is in Christ Jesus” (Rom. 3:24). This redemption is a result of God’s righteousness and He offers it to those who have faith. Paul says this eliminates boasting because there’s no way to earn salvation (Rom. 3:21-30). He then asks, “Do we then make void the law through faith? Certainly not! On the contrary, we establish the law. (Rom. 3:31) 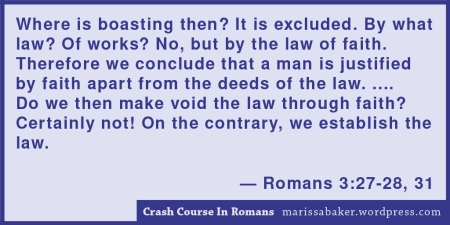 Dying to The Old

Chapter 4 talks about Abraham being justified by faith, not works, and points out that inheriting the promises of God isn’t tied to the law. You can’t get into the kingdom by being a physical descendant of Abraham (Rom. 4:1-22). You must be justified by Jesus, who gives us “access by faith into this grace in which we stand” (Rom. 4:23-5:2). Paul isn’t saying you don’t keep the commandments of God; he’s making the argument that God opens inheritance up to all who believe rather than just physical Israel. 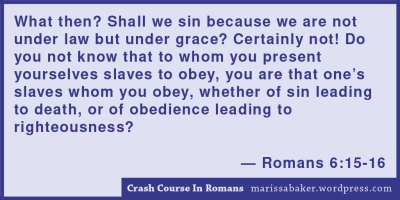 When Paul says we’re released from the law, he means that we’ve died to our old way of life. This happened so we could be married to Jesus Christ and “serve in the newness of the Spirit and not in the oldness of the letter” (Rom. 7:1-6). Sin is an enemy that led us into death when we transgressed the law. The law is good and spiritual, but we couldn’t keep it when we were carnal. We need Jesus transforming us so we can escape condemnation by walking in obedience not “according to the flesh, but according to the Spirit” (Rom. 7:7-8:1).

Living In The Spirit

When we walk with Christ in the spirit, the “righteous requirement of the law” is “fulfilled in us” (Rom. 8:2-4). Our minds are transformed to be like God’s mind, which doesn’t need to be under the law because He’s incapable of sin. When we’re living in the spirit, we won’t be violating the law of God (Rom. 8:5-14). 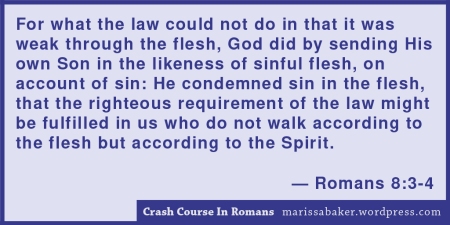 That doesn’t mean Christians don’t sin — all of us are living proof that conversion doesn’t make us immune to transgressing God’s law. But we can’t be like the people mentioned in chapters 1 and 2 who reject God’s way of life. Rather, when we sin we should recognize that we’re not in line with God’s character, repent, and continue to follow Jesus, as Paul did. I think that’s what he meant when he said, “So then, with the mind I myself serve the law of God” (Jesus is transforming me on the inside and I delight in the law), “but with the flesh the law of sin” (I’m still human, and the law keeps convicting me when I stumble) (Rom. 7:25).

The discussion of flesh vs. spirit in Romans 8 leads directly from the law to God’s relationship with believers. Under the New Covenant we’re not in bondage or fear anymore – we’re adopted into His family. We’ve even made joint-heirs with Jesus Christ Himself and promised an incredible future (Rom. 8:15-23).

As we move into chapters 9, 10, and 11, Paul is still talking about the flesh vs. the spirit and righteousness by law vs. righteousness by faith. The Jews would have argued they were God’s chosen people because “we have Abraham for our father” (John 8:33, 39). But Paul says the “children of the flesh” have never been God’s chosen, always the “children of the promise” (Rom. 9:6-13). God is still dealing with people as He has always done – by calling whom He wants to work with. And He has the right to make that choice (Rom. 9:14-24).

Paul argues that God hasn’t changed his priorities. He has always been concerned with people seeking Him in faith and now in His mercy He lets everyone do just that (Rom. 9:25-33). This includes Israel, but they can’t keep seeking righteousness or salvation in the law. Righteousness is only available through a transformative relationship with our Savior Jesus Christ (Rom. 10:1-13).

God did not “cast away His people.” He preserved “a remnant according to the election of grace,” which is a group you can’t get into by doing works (Rom. 11:1-6). Part of Israel followed the Messiah and those that didn’t were broken out of the “olive tree” that here pictures God’s people. Non-Israelites were then grafted into this same group (Rom. 11:13-19). Jesus didn’t set up a new religion when He came to this earth – He took the next step in God’s plan and started cleaning-up His church. Those now in the Vine stand there by faith and can be taken out if they refuse to continue in God’s goodness (Rom. 11:20-24). Likewise, God’s mercy allows for those in unbelief to be grafted back in if they turn to Him (Rom. 11:25-32).

To Live As God’s People

Chapter 12 begins with a “therefore” that connects instructions on how to live our lives with everything talked about so far, particularly the preceding discussion about salvation. It’s our “reasonable service” to present ourselves to God as “a living sacrifice” (Rom. 12:1). This thought continues with what my study Bible titles an “exhortation to practical living.” 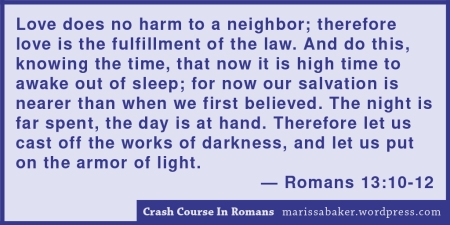 That’s the key: “obedience to the faith” and a focus on God, who has the power to establish us (Rom. 16:25-27). We’re not supposed to pay attention to “those who cause divisions and offenses, contrary to the doctrine which you learned” (Rom. 16:17-18). God has chosen us, redeemed us from the death we deserved for transgressing His law, and put us into His family. He’s not done that so we could slavishly follow the letter of the law or so we could act however we please because we don’t think His laws apply to us. He’s done this to make us part of His family and transform us to walk in newness of life. We’re meant to follow Jesus’ example and become like the Lawmaker.

7 thoughts on “Crash Course In Romans”