As I’ve mentioned once or twice before, I have something of an obsession with tall ships. This is probably a result of my love for stories set during the Age of Sail. One such story is Captain Blood by Rafael Sabatini, first published in 1922.

This book wasn’t on my original Classics Club list. I’d already read it and hadn’t intended a reread, especially after being disappointed by Sabatini’s Bardelys the Magnificent. But I ended up with a digital copy on my phone a year or so ago and started reading it while in a waiting room. So of course I had to finish it — one simply doesn’t abandon an adventure novel in the middle of the story. 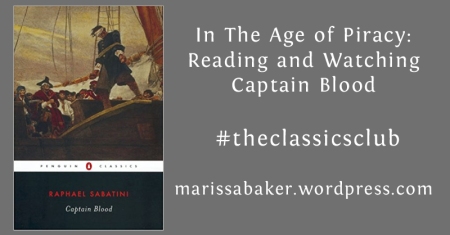 I’m (once again) in the midst of a pirate obsession, for which we can thank the recent release of Daughter of the Siren Queen (sequel to my 2nd favorite novel of 2017, Daughter of the Pirate King). So I started reading a book on the history of pirates in reality and fiction, which prompted me to watch the 1935 version of Captain Blood. And that brings me to my decision to write a post for the classic novel.

But first, a brief digression about the film, which is really quite impressive. $1 million went into its production (to put this in perspective, online estimates tell me that $1 in 1935 has the same buying power as $17-18 today). It launched Errol Flynn’s and Olivia de Havilland’s careers and made an overall profit of $1.5 million. And it was scandalously realistic for a 1930s audience. In fact, a screenwriter named Robert Lord wrote to the producer, Hal Wallis, asking “Why do you have so much flogging, torturing, and physical cruelty in Captain Blood? … Women and children will be warned to stay away from the picture — and rightly so” (quoted in Under The Black Flag by David Cordingly, p.174).

I find it interesting that in the film, Blood and his crew sail under a flag that’s a black scull and crossed swords on a white background. That’s wasn’t unknown for real-life pirates, but it’s unusual for fictional ones (Cordingly, p. 119). Another area where the film moves  closer to reality than literature is in the articles Blood draws up for his pirate crew. The set payments for different injuries, strict rules for disclosing and dividing plunder, and even the provision against seducing or carrying off women all come from real-life pirate codes (though in practice that last one did not stop pirates from taking or molesting female captives, which is what Blood specifically prohibits. Cordingly, p. 97-100).

More in keeping with our purpose as Classics Club readers, the film is also a pretty faithful adaptation of Sabatini’s novel. Of course they leave out several scenes (as one has to when adapting novel to screen), but the larger plot along with character motivations and temperaments are faithful to the novel. Which is refreshing — I think every reader knows the frustration of seeing a beloved book butchered on screen.

The story follows Irishman Peter Blood, who gave up the life of an adventurer to settle down in England and practice medicine. We pick up the story in 1685 when, after treating a wounded rebel, Blood is tried for treason and shipped off to Jamaica to be sold as a slave. While Peter Blood is fictional, the practice of selling Irishmen and political prisoners is fact. It started with the King James I Proclamation of 1625, which “required Irish political prisoners be sent overseas and sold to English settlers in the West Indies” and continued for around 200 years (from article The Irish Slave Trade – The Forgotten “White” Slaves).

In Jamaica, Blood is purchased by the loathsome Colonel Bishop at the urging of Bishop’s niece Arabella. His skill as a physician puts him in favor with the Governor, who suffers from gout. But being a favored slave is still a slavery, and Blood hatches a plot to escape along with several of his fellow convicts. A Spanish attack on Port Royal provides them with the opportunity of seizing a ship, which Blood names the Arabella, and turning pirate. This leads to a myriad of adventures on the open sea and an alliance with a notorious French pirate Levasseur.

Levasseur meets an ignoble end after his choice to kidnap the Governor of Tortuga’s daughter leads to a brief sword fight with Captain Blood (in the film version, Arabella is kidnapped and the fight lasts much longer). This incident gets embellished (as with all good stories) and leads to Arabella Bishop believing that Peter Blood is in love with the Governor’s daughter and murdered Levasseur to win her, rather than to rescue her. And so the next time Blood and Arabella meet (this time he’s rescuing her from Spaniards) she calls him a thief and a pirate whom she wants nothing to do with.

As for Peter Blood, he’s deeply offended by her scorn and completely oblivious to the fact that it’s rooted in the high regard she once had for him and the feelings she still has. So he becomes angry and petty (a flaw common in Sabatini’s heroes). More adventures ensue and in the wake of the Glorious Revolution of 1688 Blood is pardoned, commissioned by the new King William III of England, and made Governor of Jamaica instead of Colonel Bishop. And of course, since this is a classic romance novel, Peter and Arabella work things out and we assume they’ll get married.

I suppose one cannot consider Rafael Sabatini’s work the height of literary excellence. In fact, I suspect some wouldn’t regard his books as “classics” at all (at least not without a qualifier like “classic pirate fiction”) and I doubt you’d find them taught in a college literature class. However, his stories like Captain Blood and Scaramouch were wildly popular during his lifetime and they’re still thoroughly entertaining historical adventures filled with political intrigue, romance, clever dialogue, and thrilling action sequences.

Click here to get a copy of Captain Blood

to read, and here for the DVD

. Please note that these are affiliate links. This means that, at no additional cost to you, I will receive a commission if you click on the link and make a purchase.