What fictional characters do you relate to as an INTJ?

Just as we can describe real people using the Myers-Briggs® typology system, we can also use the system to type well-written fictional characters. Some of fiction’s most iconic characters are INTJs, and today we’re going to talk about seven of them that I think real-life INTJs will find very relatable.

One of the other great things about looking at character personality types is that it helps us to better understand people who have different types than we do. Fictional INTJs can serve as examples for what real-life INTJs might be like, and also show how much variation can exist between individuals with the same type.

Batman’s personality type is hotly debated, but the sheer number of INTJs who think he’s one of them merits Bruce Wayne’s inclusion on this list. Plus, the many iterations of his character do fit INTJ pretty well and inconsistencies could be explained just by the number of writers, actors, and other creatives involved in Batman’s portrayal throughout the years.

INTJs relate to Bruce Wayne/Batman’s rock-solid principles and his self-confidence when he knows he’s right. They also relate to the fact that he trusts very few people, but the ones he does trust are extremely important to him. Like Batman, INTJs also like to spend time in the background observing, connecting the dots, and making plans before they take action. You can read more about Batman as an INTJ at this Reddit thread.

I don’t want INTJ villains to be the focus of this post. But quite a large percentage of fictional INTJs are cast in the mastermind villain role and I also don’t want to ignore that. The INTJ villain is a staple of fiction because (when taken to a villainous extreme) this clever, calculating personality type can be absolutely terrifying.

Sheeve Palpatine from Star Wars is a perfect example of the INTJ villain. He has a long-term plan to take over the entire galaxy, and eventually beyond. It doesn’t get much more big-picture thinking than that (long-term, big-picture plans are key aspects of Introverted Intuition). In addition, though real-life INTJs don’t have Force-powers, their pattern-recognizing intuition can make it seem as if they “foresee” future outcomes much the same way Palpatine does.. He’s also not the only INTJ villain in Star Wars — Count Dooku is another and Thrawn is either an INTJ or ENTJ.

I’m cheating on this one a little since Katherine Johnson is a real person, not a fictional character. But there aren’t many INTJ women in fiction, and Johnson’s character in the film Hidden Figures was a rare opportunity to see an NT-type woman portrayed on-screen in a positive way. As I’ve written about in another blog post, my INTJ sister got a little teary-eyed watching Hidden Figures because these women paved the way for girls like my sister to go into STEM fields.

All three of the main characters in Hidden Figures are Thinking types. Their minds are naturally wired to excel at processing facts, figures, and data while using impersonal criteria to make decisions. Katherine is also an Intuitive type, pairing pattern-recognition and possibility-seeking with her Thinking side. Her mind works much the same way that real-life INTJs are familiar with in their own minds.

As I already mentioned, there aren’t a whole lot of INTJ women in fiction (or fictional NT women at all, for that matter). Lisbeth Salander from the The Millennium Trilogy by Stieg Larsson seems to be one of them (though some people type her as an ISTP).

I haven’t personally read this series or seen any of the film adaptations, but here’s a link to a really good article typing Lisbeth as an INTJ. Real-life INTJs tend to relate to Lisbeth’s blunt, factual, and straightforward approach to conversations (and the fact that other people often find this off-putting). Lisbeth also makes decisions in a way that INTJs find relatable — logically and with long-term consequences in mind.

“There’s genius, and then there’s me.” That quote pretty much sums-up Rodney McKay’s character in Stargate Atlantis. Rodney is a genius who really is as brilliant as he thinks he is. He’s also one of the most socially awkward of the INTJs on this list. He’s quite comfortable disregarding social conventions and interpersonal niceties to get the job done, and he sees this as a good thing. He’s not alone in this — I’ve heard an INTJ say they wish they, too, could say whatever’s on their mind confident that people respect them enough to listen without having things sugar-coated.

There’s a lot more to McKay’s character than that, though, just as there’s a lot more to INTJs than the version of themselves that they show most people. When with friends whom they trust, an INTJs might reveal a deep vulnerability that isn’t mentioned in stereotypical INTJ descriptions. Real-life INTJs can identify with Rodney both in his work persona, and in the approval- and belonging-seeking parts of himself that he usually keeps hidden.

If you only know Peter from Ender’s Game (book or film), you might be a surprised to find him on this list. Seen through his little brother’s eyes, Peter simply seems like a dangerous psychopath. But if you read the Shadow series and see Peter’s character development and rise to power as the Hegemon, then you might agree with me that he’s one of the more complex and interesting INTJs in fiction. He’s also one of my favorite fictional characters.

Peter Wiggin is incredibly clever and ambitious. Unlike his siblings Val (an INFP) and Ender (an INFJ), he not only understands what’s needed to become a social and political leader, but he has the drive to put that understanding into practice. His plans are similar to the classic INTJ villain, but Card’s writing makes Peter much more complex than that and he ends up doing more good than harm by taking over the world.

Rounding out our list of characters INTJ will relate to is Temperance “Bones” Brennan from the TV show Bones. She’s one of the few fictional characters who’s not only a female INTJ, but a non-evil one at that. I love that we’re getting more positive portrayals of Thinking-type women in fiction.

Not every INTJ relates to how careful Bones is about following rules, and some think she might be more of an ISTJ. However, others find her highly relatable. I even saw one describe her as “unmistakably INTJ.” Real-life INTJs might relate to how socially awkward she is, that she’s smart and clever, and/or her decision to pursue a career in a specialized knowledge-based field. Female INTJs, in particular, will probably identify with the fact that Bones doesn’t fit traditional models for feminine stereotypes. 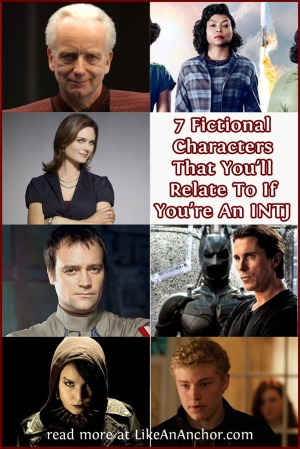 What did you think of this list? If you’re an INTJ, which fictional characters do you relate to best? Is there anyone you’d add to or take off of this list? I’d love to hear your thoughts!