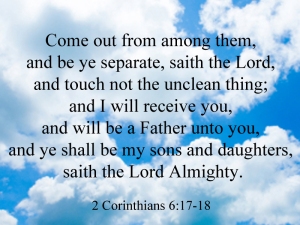 About two years ago I read a booklet that claimed it is a “misunderstanding” to describe Christians as “adopted” children of God “rather than His actual begotten sons.” The bulk of the booklet was excellent and had nothing to do with this topic, but I wanted to bring this up by way of introduction. If I had not felt uncomfortable with the way this part of the booklet was phrased, I probably never would have looked into the concept of “adoption” in the New Testament.

Once I began studying it, I started to think that adoption as presented in the NT is a way of describing the process by which we become God’s children. We were once separated from God by our sins, but because of Christ’s sacrifice we have been brought into God’s family (Col. 1:21-22; 1 Jn. 3:1-2). They are calling people who were once outside Their family and making them children. Sounds like adoption to me.

For as many as are led by the Spirit of God, they are the sons of God. For ye have not received the spirit of bondage again to fear; but ye have received the Spirit of adoption, whereby we cry, Abba, Father. The Spirit itself beareth witness with our spirit, that we are the children of God: and if children, then heirs; heirs of God, and joint-heirs with Christ; if so be that we suffer with Him, that we may be also glorified together (Rom 8:14-17)

The word “adoption” used here comes from the Greek word huiothesia (G5206). When looking at the history of this word, there is no question that its intended meaning is adoption. Spiros Zodhiates says it is used “of the state of those whom God through Christ adopts as His sons and thus makes heirs of His covenanted salvation.” He goes on to explain that,

Paul in these passages is alluding to a Greek and Roman custom rather than a Hebrew one. Since huiothesia was a technical term in Roman law for an act that had specific legal and social effects, there is much probability that Paul had some reference to that in his use of the word. Adoption, when thus legally performed, put a man in every respect in the position of a son by birth to him who had adopted him, so that he possessed the same rights and owed the same obligations. Being a huios, a son, involves the conformity of the child that has the life of God in him to the image, purposes, and interests of God and that spiritual family into which he is born.

For we know that the whole creation groaneth and travaileth in pain together until now. And not only they, but ourselves also, which have the firstfruits of the Spirit, even we ourselves groan within ourselves, waiting for the adoption, to wit, the redemption of our body (Rom.8:22-23)

In Romans 8:23, “adoption” is so important to this process of becoming God’s sons that it is equated with “redemption.” This is not an isolated comparison.

Even so we, when we were children, were in bondage under the elements of the world: but when the fulness of the time was come, God sent forth His Son, made of a woman, made under the law, to redeem them that were under the law, that we might receive the adoption of sons. And because ye are sons, God hath sent forth the Spirit of His Son into your hearts, crying, Abba, Father. Wherefore thou art no more a servant, but a son; and if a son, then an heir of God through Christ (Gal. 4:3-7)

These verses tell us that Jesus Christ came with the purpose of redeeming us in order that “we might receive the adoption.” In such a context, adoption sounds like a description of the process by which God takes people who were not part of His family and makes us His children.

Blessed be the God and Father of our Lord Jesus Christ, who hath blessed us with all spiritual blessings in heavenly places in Christ: according as He hath chosen us in Him before the foundation of the world, that we should be holy and without blame before Him in love: having predestinated us unto the adoption of children by Jesus Christ to Himself, according to the good pleasure of His will, to the praise of the glory of His grace, wherein He hath made us accepted in the beloved (Eph. 1:3-6)

Adoption — being redeemed from sin and placed in God’s family — is something we were predestined to “according to the good pleasure of His will.” Another usage of huiothesia underscores the importance of this concept. In Romans 9:4, adoption is listed alongside “the glory,” “the covenants, “the giving of the law,” “the service,” and “the promises” as something which God gave to Israel (Rom. 9:1-5).

Though Paul is the only New Testament writer to use the Greek word huiothesia in his writings, the concept of adoption is not isolated to his letters. When Jesus Christ promises in John 14:18 “I will not leave you comfortless: I will come to you,” the word “comfortless” is translated from orphanos (G3737). In the Septuagint, this same word is used in Psalm 68:5 to describe God as “A father of the fatherless.”

Zodhiates says this word is derived from “an adjective not found in the NT meaning obscure, dark, because the orphan is often little esteemed and neglected and thus forced, as it were, to wander in obscurity and darkness. Orphaned, bereved, spoken particularly of children bereaved of parents (James 1:27).” This darkness and obscurity perfectly describes the state we were in before Jesus Christ rescued us to be His adopted brothers and sisters.

From examining these verses, it seems clear that use of the word “adoption” in no way indicates we are anything less than God’s own children. Like the Roman custom Paul was likely referencing, this adoption takes someone previously not in the position of son and makes them a child in every sense of the word.