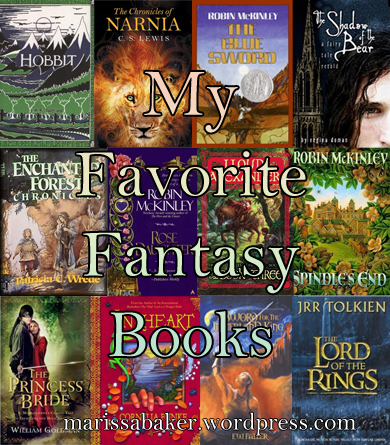 I’m writing a fantasy novel for NaNoWriMo this year, and since I have that genre on my mind, I thought I’d share a list of my favorite fantasy books. Maybe someday the novel I’m writing will be on another blogger’s favorite books list.

Books In No Particular Order

Though it is often considered childish compared to The Lord of the Rings, and I’ve heard that Tolkein wished he’d had time to re-write it, The Hobbit is my favorite book by J.R.R. Tolkein. I love all the books of Middle Earth for what Tolkein can teach me about writing fantasy, but just to sit down and enjoy reading a book I pick up The Hobbit.

“It’s all in the wardrobe just like I told you!” 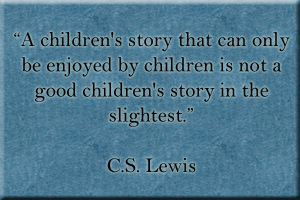 The Chronicles of Narnia by C.S. Lewis are a few more “children’s books” that I didn’t read until I was in my late teens, and not all at once. I think I read The Lion, The Witch, and The Wardrobe when I was 16, then The Magician’s Nephew, and finished the series a few years after that. I suppose it is fitting that I didn’t appreciate Narnia until I was older, since it was C.S. Lewis who said, “Some day you will be old enough to start reading fairy tales again.”

I’m Okay With Corlath Kidnapping Me

I mentioned The Blue Sword by Robin McKinley on my previous book list, but it belongs on here as well. I like the way McKinley handles magic in this world, the lore she weaves through the story, and the strong characters she creates. Some of the most interesting characters are not even human — the heroine’s incredible war horse and a hunting cat named Narknon.

How To Melt Wizards

I don’t hesitate to laugh-out-loud when I’m reading books, and The Enchanted Forest Chronicles by Patricia C. Wrede kept me giggling most of the time I was reading. I received some pretty puzzled looks from my family, until my sister read the four books and laughed almost as much as I did. The first book, Dealing With Dragons, is the best, and features a princess who asks a dragon to take her captive so she can avoid marriage, then proceeds to chase off all the princes who try to rescue her.

The Shadow of the Bear by Regina Doman is the first in a series of modern fairy tale retelling. It’s based on “Snow White and Rose Red.” Bear (aka Arthur Denniston) is one of those fictional men I fell in love with as a teenager the moment I read the scene where he dances with Blanche. I also really like the cover art for the first edition.

“True love is the best thing in the world, except for cough drops.”

If you like the film The Princess Bride, you’ll love the book by William Goldman. I recommend the 30th Anniversary Edition, so you can read Goldman’s introductions. He talks about being on-set for filming (which was, of course, done on location in Florin). It can be fun trying to figure out what actually happened and what didn’t (and whether or not it really matters).

Rose Daughter by Robin McKinley is my favorite “Beauty and the Beast” retelling, and is also the only novel of hers that I’ve thought had a thoroughly satisfying ending. Her retelling of “Sleeping Beauty,” Spindle’s End, also deserves an honorable mention just for the fact that magic in that world is so thick and tangible they have to dust if off the kitchenware before cooking.

A Sword For The Immerland King, by F.W. Faller, is the book that introduced me to “visionary fiction.” His website defines it this way:

a fiction, stated as fact to allow the reader to explore the greater life issues in the safety of a good armchair, to wonder at their own shortcomings and marvel at the confidence of others who inspire them to vision and purpose in their own lives. It is allegory and truth rolled together in a plausibility that transcends time and space and gives us pause to ponder who we are and where we are going.

What Faller does with his world of Tessalindria reminds me of Tolkein’s work with Middle Earth, and what I’m hoping to do with Ves’endlera.

The Chronicles of Prydain by Lloyd Alexander, follow the adventures of an assistant pig-keeper named Taran. It spans five books and is, I suppose, technically another series of children’s books. One of the most interesting things about these novels is that they are based in part on Welsh legends. The author uses some names from the original legends and hints of Welsh geography (which he warns is “not to be used as a guide for tourists”), then inserts main characters born out of his own imaginings.

Inkheart, Inkspell, and Inkdeath are the three books in the Inkworld series by Cornellia Funke. Setting aside the great fantasy content for a moment, these are beautiful books. Each chapter begins with a quotation and ends with a sketch. They are books about books, with main characters being read into the real world and back into books and blurring the lines between reality and fiction.

3 thoughts on “My Favorite Fantasy Books”