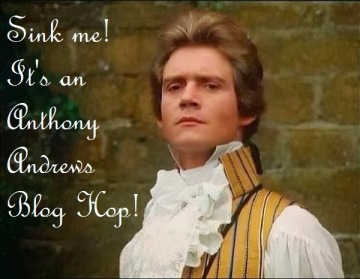 A blog I follow is participating in the Anthony Andrew’s Blog Hop this month, and after reading her post I decided to give it a go. The Scarlet Pimpernel (1982) has long been one of my favorite films, ever since my mother shared it with my sister and I as children. As a reader, of course the next thing I did was look up the books, which are just as enjoyable as the film.

The 1982 film is based on two books by Baroness Emmuska Orczy: The Scarlet Pimpernel and Eldorado. According the extremely reliable site that is Wikipedia, Orczy may or may not have been the first to write a “hero with a secret identity.” It is quite likely that she influenced, if not inspired, the creation of later nobleman-hero characters like Zorro and Batman. She released 16 books related to the Scarlet Pimpernel, including novels and two short story collections directly related to Sir Percy’s exploits as well as a few novels about his relatives.

The first book was published in 1905. It is set in 1792 in the midst of the French Revolution. Sir Percival Blakeney is one of the wealthiest and laziest men in England (he does, in fact, bear more than a passing resemblance to Johnston McCulley’s Don Diego Vega [aka Zorro], who debuted in 1919). The most ambitious thing he does is write poetry (see photo caption for a sample). At least, that’s what he wants people to think.

Behind this carefully cultivated facade, Sir Percival Blakeney is The Scarlet Pimpernel, a daring Englishman who leads a band of adventurers into France to rescue people from Madam la Guillotine’s blade. He usually meets with success, which earns him a dedicated adversary named Chauvelin (played by Ian McKellen).

Sine 1917, there have been several film and television adaptations of The Scarlet Pimpernel. I’ve not watched them all, or even most of them, but I doubt any of the actors could rival Anthony Andrew’s portrayal of Sir Percival Blakeney. He is the Scarlet Pimpernel — even when I read the books I can hear his voice in my head every time Percy has written dialogue. I hardly ever refer to the character without saying “Sir Percival Blakeney. Baronet” with the same affected pause that Anthony Andrew’s Sir Percy speaks with when introducing himself.

For my readers who are Myers-Briggs fans, one of the other writers participating in this blog hop typed Sir Percy as an ENFP. It makes sense — he is a visionary, a crusader, an idealistic champion who lives to right wrongs. The traits that are common to Champion/ENFP types serve him well as a hero with a secret identity. David Keirsey says people of this type

have outstanding intuitive powers and can tell what is going on inside of others, reading hidden emotions and giving special significance to words or actions. In fact, Champions are constantly scanning the social environment, and no intriguing character or silent motive is likely to escape their attention. Far more than the other Idealists, Champions are keen and probing observers of the people around them, and are capable of intense concentration on another individual. Their attention is rarely passive or casual. On the contrary, Champions tend to be extra sensitive and alert, always ready for emergencies, always on the lookout for what’s possible.

Sounds like the Scarlet Pimpernel to me, and Anthony Andrew’s portrays him perfectly. I’ve seen analysis written about certain actors’ eyebrows (yes, I have too much time on my hands for looking up weird things on the Internet), and we could certainly add the way Anthony Andrew’s raises his eyebrow when Percy is scanning a room to the list of analysis-worthy eyebrow-acting. You can tell in an instant, just by his posture and the look in his eyes, when he shifts from lazy Sir Percy to alert Scarlet Pimpernel.

I hope you’ll check out some of the other blogs in this blog hop. Anthony Andrews is not an incredibly prolific actor, but he is in several good films which are being covered by other bloggers this month. I’m looking forward to reading more of them myself. Since I’m on WordPress (which doesn’t support Javascript), you’ll have to click the link below to see other posts in the blog hop: