It seems fitting to find myself studying Jonah and posting about it on July 4th in the week following the Supreme Court decision regarding homosexual “marriage.” It seems like this court decision was the last piece of evidence many Christians required to convince them that we’re no longer living in a Christian nation (if we ever were). I’ve read several good responses, and I’ve been pleased and relieved to see that most have come from a place of love instead of anger (now if only those who accuse Christians of being intolerant would exercise a little tolerance of their own …). 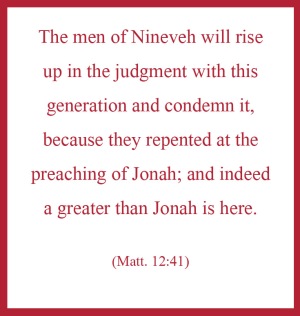 Christians have always lived in a world that has little respect for God’s laws. In some cultures for certain stretches of time, we’ve had more of God’s laws as part of our country’s laws, but that has changed. It’s been changed here in the U.S. for quite some time, and the same was true of the Jews living under Roman law at Jesus’s time.

Jesus never condoned legalized sin, but He was more concerned with the state of God’s people than the state of the world around them. He didn’t call for mass reforms in Roman society — He called for the people who professed to follow God to turn back to true worship of Him.

The men of Nineveh will rise up in the judgment with this generation and condemn it, because they repented at the preaching of Jonah; and indeed a greater than Jonah is here. (Matt. 12:41)

Jesus used Nineveh and Jonah as an example in His day, and I’ll bet we can learn from it now as well. Let’s take a look.

Unlike the other minor prophets, the book of Jonah is written as a story, and it seems like a rather simple tale on the surface. No one reads a children’s version of Zechariah to the kids before tucking them into bed, but I remember having a cute little kids book about Jonah and the whale in our library once.

Now the word of the Lord came to Jonah the son of Amittai, saying, “Arise, go to Nineveh, that great city, and cry out against it; for their wickedness has come up before Me.” (Jon. 1:1-2)

We all know what happens next. Jonah flees from God’s commission, is stopped by a storm at sea, swallowed by a great fish, and then repents in the fish’s belly. God has the fish vomit him out, repeats His command, and is promptly obeyed.

And Jonah began to enter the city on the first day’s walk. Then he cried out and said, “Yet forty days, and Nineveh shall be overthrown!” (Jon. 3:4)

We’re not told exactly what Nineveh’s sin involved, but in studying the language used in the book of Jonah, Matthew Henry concludes in his commentary that, “Their wickedness has come up, that is, it has come to a high degree, to the highest pitch; the measure of it is full to the brim … it is a bold and open affront to God” (Henry’s comments on Jonah 1:1-3).

Sounds like society today, doesn’t it? And don’t think I’m just talking about this latest court decision — homosexuality isn’t the only or worst sin in the world. I’m including abortion, divorce for ungodly reasons, heterosexual couples living together without marriage, anti-Israel sentiments, corruption in worldly and church leadership, rejection of God’s role in creation, and others that slip my mind right now.

We live in a wicked culture — one that we know God will judge for its crimes against Him. But as we learn from the story of Jonah, God is also willing to show mercy.

So the people of Nineveh believed God, proclaimed a fast, and put on sackcloth, from the greatest to the least of them. Then word came to the king of Nineveh; and he arose from his throne and laid aside his robe, covered himself with sackcloth and sat in ashes. And he caused it to be proclaimed and published throughout Nineveh by the decree of the king and his nobles, saying, “Let neither man nor beast, herd nor flock, taste anything; do not let them eat, or drink water. But let man and beast be covered with sackcloth, and cry mightily to God; yes, let every one turn from his evil way and from the violence that is in his hands. Who can tell if God will turn and relent, and turn away from His fierce anger, so that we may not perish?” (Jon. 3:5-9)

The key here is that the people believed God, and repented. It wasn’t just a few people, either. This was the entire society, led by their king.

Then God saw their works, that they turned from their evil way; and God relented from the disaster that He had said He would bring upon them, and He did not do it. (Jon. 3:10)

We should be thankful indeed for God’s mercy, for all of us have had this exact same thing happen in our lives. We’ve all sinned (Rom. 3:23), and “the wages of sin is death” (Rom. 6:23). Like the Ninevites, we were under a sentence of death, but God spared us in His mercy by sending His Son.

As we talked about in the post on preparing for baptism, to accept Christ’s sacrifice and walk with God, we have to repent and acknowledge our sin, believe in God, and commit to following Him. The Ninevites here in Jonah had those first two things, and it was enough for God to choose mercy.

What Will You Do?

As much as God rejoices over repentant sinners (Luke 15:7), the rest of this book is about Jonah’s response to their repentance. God is also concerned with how His people respond to His work in others’ lives.

But it displeased Jonah exceedingly, and he became angry. So he prayed to the Lord, and said, “Ah, Lord, was not this what I said when I was still in my country? Therefore I fled previously to Tarshish; for I know that You are a gracious and merciful God, slow to anger and abundant in lovingkindness, One who relents from doing harm. Therefore now, O Lord, please take my life from me, for it is better for me to die than to live!” (Jon 4:1-3)

It’s a bit difficult to imagine a modern parallel, but let’s try. Suppose God calls you to deliver a prophecy of destruction to … let’s say an abortion clinic. You try to get out of it, but finally God convinces you to go and warn them. Message delivered, you stalk across the street to wait for the fire and brimstone. You didn’t want to be here, but at least you’ll have front-row seats when they get what’s coming to them.

Only, it doesn’t happen. Instead, every single person working there repents publicly, starts to fast and pray, and the head of the clinic calls for other doctors to do the same. God shows them mercy because of their response. Do you?

Then the Lord said, “Is it right for you to be angry?” So Jonah went out of the city and sat on the east side of the city. There he made himself a shelter and sat under it in the shade, till he might see what would become of the city. (Jon. 4:4-5)

God gives him shade in the form of a gourd plant, which made Jonah happy, but then took it away the next day and Jonah was angry again.

But the Lord said, “You have had pity on the plant for which you have not labored, nor made it grow, which came up in a night and perished in a night. And should I not pity Nineveh, that great city, in which are more than one hundred and twenty thousand persons who cannot discern between their right hand and their left—and much livestock?” (Jon. 4:10-11) 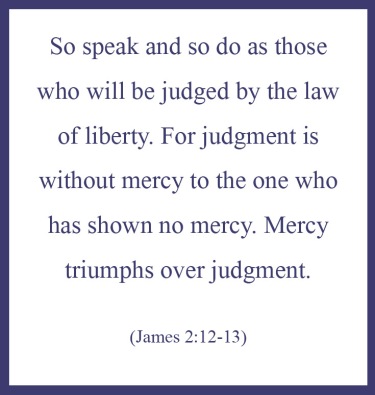 The book ends here, leaving us with the same question God asked Jonah. We must never encourage people in sin or say that it’s okay, but are we so rigid in our convictions that we don’t allow for love and mercy? Are we hoping for sinners’ destruction, or praying they will come to repentance?

So speak and so do as those who will be judged by the law of liberty. For judgment is without mercy to the one who has shown no mercy. Mercy triumphs over judgment. (James 2:12-13)

In these times of cultural upheaval, God is looking to see how His people respond. Will we run away and say the sin around us doesn’t matter, as Jonah did at first? Will we be angry and unforgiving, as Jonah was later? Or will we be like God — firm against sin yet ever ready to extend mercy?

5 thoughts on “Will You Respond With Mercy? (Lessons from Jonah)”