Near the beginning of the epistle to the Hebrews, we find a specific instruction to do something that I doubt we do often enough.

Therefore, holy brethren, partakers of the heavenly calling, consider the Apostle and High Priest of our confession, Christ Jesus, who was faithful to Him who appointed Him, as Moses also was faithful in all His house. (Heb. 3:1-2) 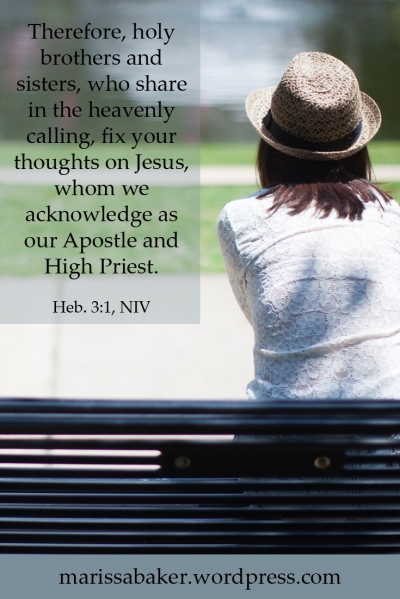 The “therefore” at the beginning of this verse connects it with everything that came earlier in the letter — God appointing His Son heir of all things who was sent into the world and now sits at His Father’s right hand (Heb. 1:1-3), the importance of holding on to His word (Heb. 2:1-2), Jesus’ suffering to become the “captain of our salvation” (Heb. 2:10) and our faithful High Priest (Heb. 2:17-18). It’s because of all He is and what He has done that we must “consider” Him.

The word “apostle” simply means “one sent” (G652, apostolos). It often refers to a messenger or ambassador, and always to some sent for a specific purpose. They’re always sent by someone greater than they, and given authority to accomplish the task they’re given.

“The Spirit of the Lord is upon Me, because He has anointed Me to preach the gospel to the poor; He has sent Me to heal the brokenhearted, to proclaim liberty to the captives and recovery of sight to the blind, to set at liberty those who are oppressed; to proclaim the acceptable year of the Lord.” Then He [Jesus] closed the book, and gave it back to the attendant and sat down. And the eyes of all who were in the synagogue were fixed on Him. And He began to say to them, “Today this Scripture is fulfilled in your hearing.”(Luke 18:20)

Jesus was anointed (that’s what “Christ” and “Messiah” mean) and sent for a specific purpose. John 3:16-17 sums it up nicely — Christ was sent to save the world because God loves us. Our part in this is simple.

Jesus answered and said to them, “This is the work of God, that you believe in Him whom He sent.” (John 6:29)

In His final prayer, Jesus defines eternal life as belief in “the only true God” and in the One Sent (John 17:3). Christ’s role as Apostle is closely connected with His work as Savior, and it’s a work He continues today. He was sent to this earth once as the Messiah, and He is sent to each of us now as He continues His work as the “captain of our salvation.”

Repent therefore and be converted, that your sins may be blotted out, so that times of refreshing may come from the presence of the Lord, and that He may send Jesus Christ, who was preached to you before (Acts 3:19-20)

After we repent and begin walking in fellowship with God, He sends Jesus Christ Himself to be there with us. He’s our ever-present guide, the One who will never leave or forsake us, and the only way for us to know the Father (John 14:6).

Now, therefore, you are no longer strangers and foreigners, but fellow citizens with the saints and members of the household of God, having been built on the foundation of the apostles and prophets, Jesus Christ Himself being the chief cornerstone, in whom the whole building, being fitted together, grows into a holy temple in the Lord, in whom you also are being built together for a dwelling place of God in the Spirit. (Eph. 2:19-22)

As the One Sent, Jesus Christ is the cornerstone of the apostolic foundation. He is the bedrock on which every right doctrine is founded, and on which every person in God’s family is built up. We just devoted a whole series of posts to our doctrinal foundation, and here we find ourselves yet again in a verse about foundations.

Right after the verse we opened with from Hebrews 3, the writers starts discussing parallels between Christ and Moses. Moses is considered a type of Messiah, and gave one of the first recorded Messianic prophecies (Deut. 18:15-19). God sent Moses “to be a ruler and a deliverer” to physical Israel (Acts. 7:35), picturing how Christ would be sent as the savior and King of all the world.

For this One has been counted worthy of more glory than Moses, inasmuch as He who built the house has more honor than the house. For every house is built by someone, but He who built all things is God. And Moses indeed was faithful in all His house as a servant, for a testimony of those things which would be spoken afterward, but Christ as a Son over His own house, whose house we are if we hold fast the confidence and the rejoicing of the hope firm to the end. (Heb. 3:3-6)

God is building us up on Christ’s foundation to belong to Christ. This idea will also tie-in with next week’s post, since the house we’re becoming is described in other places as the temple of God and another of Christ’s roles that we are to “consider” is that of High Priest.”

There’s another passage in Hebrews that tells us to consider Jesus. It’s in Hebrews 12, after it talks about Him being “the Author and Finisher of our faith.”

For consider Him who endured such hostility from sinners against Himself, lest you become weary and discouraged in your souls. (Heb. 12:3)

Thinking about, studying, and spending time with the One Sent should encourage us. He’s the Beginner and Originator sent to make our faith possible, and the Perfecter sent to bring our faith to completion.

When Jesus ordained twelve disciples, it was “that they might be with Him and that He might send them out to preach” (Mark 3:14). He told them, ” I send you out as sheep in the midst of wolves. Therefore be wise as serpents and harmless as doves” (Matt. 10:16). The One Sent started sending out His own ambassadors, and 11 of those 12 became the first apostles of the New Testament church.

The specific office of apostle can only be conferred by Christ Himself (Gal. 1:1), and nowhere are the churches instructed to ordain apostles (Zodhiates, G652). While there apparently aren’t “apostles” today, Christians do still bear witness to the One Sent.

One of our jobs here on this earth is to show by our lives, our unity, and our love that Jesus was sent by God the Father. When we’re built up on the foundation of the apostles and prophets, of which Christ is Cornerstone, and let “the Spirit of the living God” write on our hearts, we become an “epistle of Christ” (2 Cor. 3:3). We’re like a letter that the One Sent is sending into the world, so that we can point others toward Jesus, prompting them to also “consider the Apostle.”

One thought on “Consider the Apostle”