Last week, I compared A Secret Garden to my favorite fairy tale, Beauty and the Beast. The subject of this week’s Classics Club post, A Little Princess by Frances Hodgson Burnett, has fairy tale elements which are even more obvious. 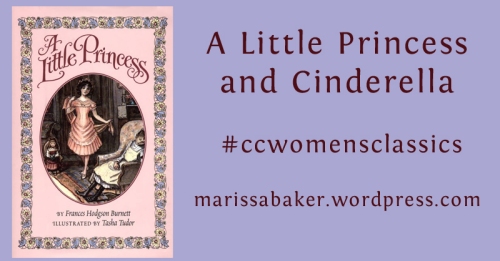 It’s pretty much the exact same story as Cinderella — an only child whose sweet disposition is unaffected by being spoiled is left in the care of an unkind woman after her father’s unexpected death. The austere and jealous guardian transforms the girl into a servant who lives in an attic and makes friends with rodents and birds. Eventually, a wealthy man swoops in and rescues her (Tweet about it).

There are even jealous “step-sister” figures in the form of some of the girls at the school (we’re looking at you, Lavinia). And you could call Ram Dass a “fairy godmother” of sorts, since he transforms Sara’s dingy attic into a princess room simply because he notices she’s so kind and wants to do something nice for her. It’s a key fairy-tale trope — eventually Magic (or it’s human equivalent) will step in and set things right if only you’re a good person.

Sara’s disposition throughout her enslavement could have stepped right out of the latest Cinderella film. Sara and Ella have different personalities (Sara is a young INFP, and I’ve typed Ella as an ISFJ), but they react in much the same way. They commit to making the best of a situation they can’t get out of and maintain their courage and dignity in the face of people who would try anyone’s patience.

Well, I take that back about situations they can’t get out of. Sara can’t escape by herself because of how young she is, but Ella could have left if she wasn’t so committed to the house as her parent’s legacy. That’s one of the things I’ve seen people complain about when discussing the new Cinderella film — that she’s to passive. I don’t think Sara would have been like that once she was grown. She probably would have applied for different teaching positions or tried to find work as a governess. And that’s making me think of Jane Eyre again for the second blog post in two weeks (maybe I should re-read that one, too).

I’ve enjoyed re-reading these two classics from my childhood. Up will now, all the reads from My Classics Club Book List have been new to me. These shorter, easy-read books have also put me 2 books ahead of schedule for reading at least 55 books this year, which is an added bonus 😀

Click here to get a copy of A Little Princess

. Please note that this is an affiliate link. This means that, at no additional cost to you, I will receive a commission if you click on the link and make a purchase.

4 thoughts on “A Little Princess and Cinderella”