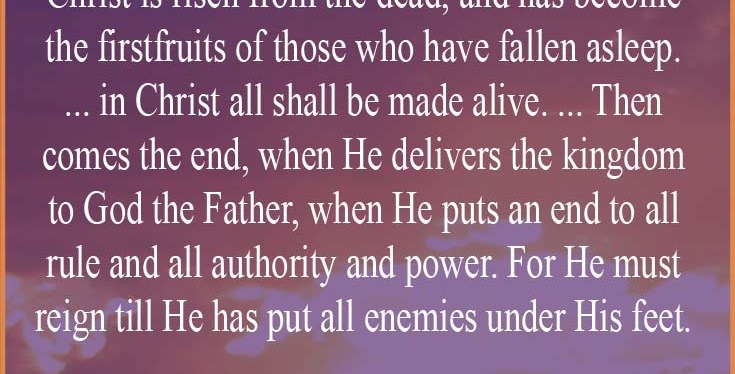 Reading N.T. Wright’s book Surprised by Hope: Rethinking Heaven, the Resurrection, and the Mission of the Church has been eye-opening. He’s not really talking about things I’ve never heard before, but the way he frames his exegesis is making me think about Christ’s resurrection and the church’s mission at a depth I hadn’t pondered until now.

Wright places the resurrection in its historic context to show that what happened when Jesus rose from the grave three days after His Passover sacrifice was truly revolutionary. The Greek and Roman cultures believed in an immortal soul and the Jews believed in a resurrection, but no one was expecting Jesus (or anyone else) to rise from the dead in a renewed spiritual body. The risen Jesus was far too tangible and real to fit Greco-Roman ideas of afterlife and it was unexpected timing-wise from the Jewish perspective. This resurrection was sealed proof that Jesus was indeed the Messiah and that things on earth would never be the same again.

As Jesus’ followers began spreading the gospel, we find that preaching His resurrection went right alongside it. The first time the apostles were arrested, it is because the Jewish leaders were “greatly disturbed that they taught the people and preached in Jesus the resurrection from the dead” (Acts 4:12). The Apostles didn’t budge on this point, for it’s key to the entire New Testament. When the leaders arrest Peter and John to question what power they used to heal a lame man, Peter calls them out on the heart of the matter.

let it be known to you all, and to all the people of Israel, that by the name of Jesus Christ of Nazareth, whom you crucified, whom God raised from the dead, by Him this man stands here before you whole. This is the ‘stone which was rejected by you builders, which has become the chief cornerstone.’ Nor is there salvation in any other, for there is no other name under heaven given among men by which we must be saved.” (Acts 4:10-12)

It’s pretty straight forward. “Jesus Christ our Lord” was “declared to be the Son of God with power according to the Spirit of holiness, by the resurrection from the dead” (Rom. 1:3, 4). The Jewish leaders had filled their role in Messianic prophesies of despising the cornerstone and now God dramatically revealed Jesus as the true Messiah by raising Him from the dead. 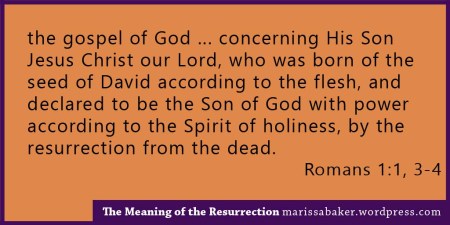 Even while He was still alive, Jesus said His resurrection would be the only sign given of His authority to act as Messiah (which means “anointed” and is a synonym for Christ). In John’s gospel, He “was speaking of the temple of His body” when He told the Jews, “Destroy this temple, and in three days I will raise it up” (John 2:19, 21). In Matthew he said, “An evil and adulterous generation seeks after a sign, and no sign will be given to it except the sign of the prophet Jonah. For as Jonah was three days and three nights in the belly of the great fish, so will the Son of Man be three days and three nights in the heart of the earth” (Matt. 12:39-40).

Without the resurrection, we don’t have a Messiah or a New Covenant. “If Christ is not risen, your faith is futile; you are still in your sins!” (1 Cor. 15:17). But since He has been raised, by Him comes the resurrection of the dead and we have hope of a future life with Him and our Father in His coming kingdom.

That’s often where discussions of the resurrection stop — with pointing to a  future hope. But N.T. Wright points out that’s not where the early church stopped. Jesus’ resurrection proved that He was Messiah — the anointed one who would save Israel — and it also proved that He is Lord.

he [David], foreseeing this, spoke concerning the resurrection of the Christ, that His soul was not left in Hades, nor did His flesh see corruption. This Jesus God has raised up, of which we are all witnesses. … Therefore let all the house of Israel know assuredly that God has made this Jesus, whom you crucified, both Lord and Christ (Acts 2:31-32, 36)

“Lord” is an often misunderstood word. In the churches of God as I was growing up, I rarely heard it except as a direct quote from scripture because it was deemed “too Protestant” (never really understood that, but there it is). At the other extreme, I’ve seen some use “Lord” as a generic title like “God” without teaching the full sense of what it means. In the New Testament, “Lord” is translated from the Greek word kurios (G2962). It means “master, owner, lord,” and carries the sense of “having absolute authority” over something or someone (Zodhiates KeyWord Study Bible). 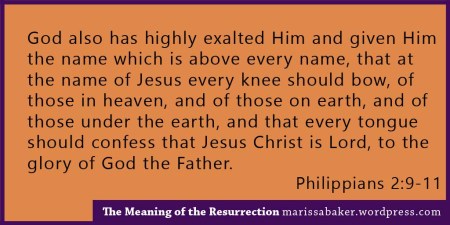 Jesus Christ’s Lordship is very real, and it should be acknowledged and proclaimed by His people. It should also move us to respond in a certain way. Jesus asked the Jews, “Why do you call Me ‘Lord, Lord,’ and not do the things which I say?” (Luke 6:46). Unless knowing who He is promotes action — digging deep into the word of God, laying a foundation in Christ, and doing as He commands — we’re not really recognizing Him as Lord.

And Jesus came and spoke to them, saying, “All authority has been given to Me in heaven and on earth. Go therefore and make disciples of all the nations, baptizing them in the name of the Father and of the Son and of the Holy Spirit, teaching them to observe all things that I have commanded you; and lo, I am with you always, even to the end of the age.” (Matt. 28:18-20)

The word “power” here is exousia (G1849) and it combines “the two ideas of right and might.” It means Jesus has power to carry out anything and the authority to use that power (Zodhiates). In essence, it’s another way of saying that He is Lord. Note that this is present-tense in heaven and on earth. We’re not told that He will be Lord at some point in the future, but that He already is and therefore His followers have certain responsibilities.

I encourage you all to read Surprised by Hope, which covers scriptures asserting Christ’s present Lordship over the world (as well as what that means for re-thinking heaven and hell) in far more detail than space allows me here. When the Father raised Jesus from the dead after His atoning sacrifice, it was a the pivotal turning point of the whole plan of God.

We can sum this up in the following way. The revolutionary new world, which began in the resurrection of Jesus — the world where Jesus reigns as Lord, having won the victory over sin and death — has its frontline outposts in those who in baptism have shared his death and resurrection. The intermediate stage between the resurrection of Jesus and the renewal of the whole world is the renewal of human being — you and me! — in our own lives of obedience here and now” (Wright, p. 299).

This framework gives additional insight into Paul’s writings about us being buried and resurrected with Christ through baptism (Col. 2:12; Rom. 6:4). When we’re baptized, we’re identifying with Jesus Christ our Lord’s resurrection. This results in a transformation at the heart level and (should) cause us to “walk in newness or life” no longer serving sin (Rom. 6:4-10). We are “strangers and pilgrims on the earth” (Heb. 11:13) because our “citizenship is in heaven” (Phil. 3:20). 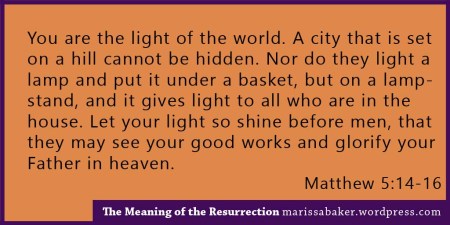 As citizens of Christ’s kingdom living in a world that does not yet recognize His authority, we’re representatives of the coming kingdom. When people look at us, they should see evidence of the future hope of the world. The church should be a foretaste of what the Lord Jesus Chirst’s kingdom on earth will look like.

you are a chosen generation, a royal priesthood, a holy nation, His own special people, that you may proclaim the praises of Him who called you out of darkness into His marvelous light (1 Pet. 2:9)

We’re not called to live a resurrected life with Jesus just for the good it does us, personally. We’re also supposed to “show forth” the One who has called us. Peter goes on to tell us this includes abstaining “from fleshly lusts which war against the soul, having your conduct honorable among the Gentiles,” submitting to governmental authority, and patiently doing good things as servants of God (1 Pet. 2:11-17). It’s not enough to say Jesus is Lord — true Christians will live His Lordship in their lives and keep His commandments.

The transformation in our lives that happens when we recognize Jesus as our Lord and commit to walking in Him should be evident to the world. The church cannot hide or try to avoid drawing attention to herself — we’re supposed to proclaim in all that we are and do that Jesus is our Lord and He is the world’s true Lord. This doesn’t mean we shove our religion down other people’s throats or expect people who don’t believe to act like Christians, but it also doesn’t mean we have permission to twiddle our thumbs while we wait around for Jesus to come back and set things right. We’re the body of the Lord Jesus Christ in the world today and we’re proof that just as He is transforming us right now, He will transform all creation. God longs to share this truth will as many people as possible and we should too.