Feminism constantly tells women we have no reason to be ashamed of our bodies, our desires, our gender, our career goals – of anything really. We can do and be whatever we want and nothing should hold us back. It sounds good in theory, but like many things humans do it can be taken to extremes.

Take the Women’s March from a few weeks ago as an example. If you want to march around with what one blogger I follow delicately called a pink taco on your head I won’t stop you. But those of us who don’t do things like that aren’t any less “women” than you are, nor are we less interested in being treated with dignity, respect, and equality. In fact, that’s a big reason we express our notions of feminism (and femininity) in different ways.

Today, I’m going to take society’s claim that there’s no need to feel shame about the kind of woman you are to heart and say I’m not ashamed of modesty. Depending on your background this word may have provoked a strong reaction. Perhaps you think modesty is a repressive, old-fashioned list of rules telling women how not to dress and act. Or maybe you think modesty sounds safe – a way to hide from attention you don’t want any more. But modestly is about so much more than a set of rules for covering yourself up. It’s more powerful and – dare I say it? – sexy than we often think.

Let’s start with a working definition of modesty: Modesty is concealing what you do not want everyone to know or see so that you can reveal yourself only to someone you trust. It’s typically associated with the idea of sex and how much skin you show, but it has to do with other things as well. For example, you might also exercise modesty by not calling undue attention to yourself or by reserving certain parts of your personality for people you know well.

In her book A Return to Modesty (which I’ve written about before), Wendy Shalit writes, “certainly sexual modesty may damp down superficial allure, the kind of allure that inspires a one-night stand. But the kind of allure that lasts – that is what modesty protects and inspires” (p. 172). Sounds counter-intuitive, but it’s an idea that’s continually supported by studies and polls showing that couples in a committed relationship report more fulfilling sex-lives than any other group. 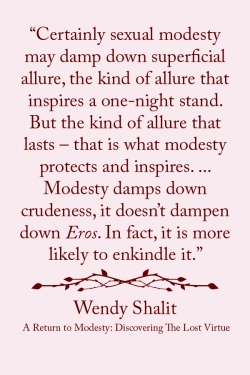 Sexual modesty isn’t about missing-out on sex – it’s about choosing to wait for sex until you’re in a relationship with someone you truly care about and who is willing to reciprocate your commitment. Instead of pressuring women to sleep with whoever they want as often as they can because they’re “liberated,” modesty says that you have the freedom to be picky.

Of course, this sort of advice presupposes you want a committed relationship with one man rather than a series of one-night stands or uncertain dating relationships. While it seems like an old-fashioned notion, I think our obsession with Jane Austen novels and romantic comedies points to the fact that many of us are still, at heart, romantics. We want a Mr. Darcy to defy social conventions to choose us as his only love.

If someone tells you sex is no big deal but you feel differently, modesty says you have the right to tell them “no” for no other reason than that your personal standards of conduct deserve respect. Modesty says there’s no shame in reserving yourself for one man. If you only want to be sexy for your own Mr. Darcy and not for every other man who shows interest in you, then you have the right to make that choice.

A Right to Cover Yourself

I’m not the sort of person who has a modesty rule book detailing how many inches of skin needs covered, but I do think how we dress matters. While it is very true that women should be free to wear whatever they like without fear of being assaulted or harassed, it is also true that what we choose to wear influences the kind of attention we’ll attract. If you’re going to a bar with the intention of picking someone up, you’ll dress differently than when you want to stand-out as a professional woman at a job interview.

Modesty tells us there is nothing wrong with choosing to wear clothing that covers our bodies. We’re constantly being told we can wear “whatever you want,” but that often comes with disapproval if you don’t take it as permission to wear revealing clothes. I’m personally far more comfortable – even when people aren’t looking – if I know my shirt won’t fall open when I stoop to pick something up or that my swimsuit doesn’t leave my behind hanging out.

We should also mention is that modesty isn’t really about what men think of how women dress. We aren’t responsible for other people’s thoughts or actions – only our own. Modesty’s more about choosing a level of exposure that makes you comfortable and which fits with your beliefs regarding proper attire. You have the right to cover what you don’t want people to see and don’t let the culture tell you otherwise, even if it’s wrapped-up in language of “empowerment.”

It’s okay to be counter-cultural. If there’s currently a stigma attached to modesty, it’s up to those of us who want to live and dress modestly to show other people why it can be a good thing. And even if you don’t want to follow the sort of guidelines most people associate with modesty, I don’t think it’s too much to ask that you don’t try and talk us out of being modest. Let’s not give anyone reason to feel ashamed of modesty ever again.

5 thoughts on “Not Ashamed of Modesty”