This is my third post in a series about Christians of different Myers-Briggs types. When you start talking with people in the churches, it quickly becomes clear that while we share a common faith there is quite a variety among us as well. Some of that has to do with background, some with the denomination we’re part (or not part) of, and some with personality. And if we want our churches to be a welcoming place for all people who seek to know Jesus, it’s a good idea for us to understand how different personality types relate to their faith.

Our walks with God don’t all look the same. We’re influenced by our backgrounds, variations in beliefs, and individual personalities. And even though the goal is for us all to become “like God,” that doesn’t mean we become indistinguishable from each other. God created great variety in people and I believe He did that for a reason. So let’s spend today’s post hearing from and talking about the unique perspectives of INFP Christians.

I heard from five INFPs who responded to most of the questions I asked. In general, INFPs are private people and I’m not surprised that the response rate was lower than what I saw for the INFJ post and the ENFP post I wrote earlier. One INFP who I talked with in-person said she wouldn’t feel comfortable submitting even an anonymous response. Still, I hope any INFP Christians reading this post will feel safe commenting and adding their thoughts to the conversation. I’d love to hear from more of you!

The first question I asked people was which Bible stories and characters they identified with most. There was very little overlap in specific characters INFPs chose as their favorites, though several of the chosen characters were prophets.

Brian is also the first person I’ve heard from who had an easier time picking out favorite books than favorite characters. He writes, “My all time favorite books for sure are Proverbs and Revelations. Definitely the wisdom books and the books of prophecy. But those two are my favorite. Proverbs cause I can just find so much to apply to my life to grow inside as a person, mentally, spiritually, intellectually. … Revelations for its lively metaphorical (or real) descriptions of whats to come, celestial, and spiritual beings. It paints such wonderful pictures for me that really differ from reality (our reality) and it fascinates me. My friends are personally scared of this book in particular and I can see why but its such a mysterious frighting window that I love to peak through.”

On the whole, INFPs don’t seem quite as worried about finding their particular niche in the church as other types I’ve talked with do. I wonder if this has to do with the fact that Introverted Feeling is their “driver” process. Also called “Authenticity,” this mental process is more concerned with staying true to one’s own convictions than meeting outside expectations. Perhaps if INFPs believe they understand how they best fit into Christ’s body they don’t feel so much pressure to discover how others think they’re “supposed” to fit in.

Heather writes, “No, I do not feel under appreciated. I feel that I am needed in the body in the same way that my neighbor is.” She also talked about each of us having “different functions” in the body and didn’t seem worried that her particular gifts would be overlooked. Similarly, Boniface, a Benedictine monk, wrote that he didn’t really feel like he was missing opportunities to use his gifts and talents because “God finds a way.”

Dara and Brian both talked about using creative talents in their churches. Dara sings and Brian is an artist. Brian’s main frustration in the area of gifts and talents is feeling that “the arts and creativity isn’t very, not accepted but looked at as an essential gift in my church.” He wishes more people would realize that all the arts require “a lot of thought, set up, and practice.”

Patricia and Boniface both mentioned teaching and prayer as talents they have an opportunity to use in the church. And though Patricia is reluctant “to get involved in the planning or carrying out of church activities because of past negative experiences with church politics,” she feels that being an introvert and an intuitive “helps with evangelism. I feel like I can predict how a non-believer would respond to God, and how God would move in his or her life if given the chance.”

Connecting With The Church

Two INFPs mentioned that the expectation to be “outgoing and socially active” is draining for introverts. But by and large, the INFPs I talked with didn’t have complains about the church not being a good fit for them. In fact, Heather wrote, “I think the church, is about being members of the body each intentionally having different functions. …  I don’t think the church needs to conform to my personality preferences.” This is a common theme among INFPs. They don’t feel that it’s the church’s responsibility to “make room” for them. That’s why I chose Ephesians 4:16 as the title scripture for this post. INFPs truly believe that the church needs every member and they seek to find their authentic role as one member of Christ’s body.

When asked how the church could better connect with someone like you when preaching the gospel, Boniface wrote, “Not sure. I think it does a pretty good job already.” Patricia elaborated, saying, “I don’t think that the church needs to make an effort to connect with me, but that is my personal responsibility as a Christian to make an effort to connect with the church, imperfect and diverse as it is.” Wow. If more of us had that attitude, I doubt we’d have so many people feeling alone in their churches.

As for connecting with non-believers, Patricia writes, “I think that this is the strength of having diverse church members who can, in their own way, share God’s love with others.” I’ll whole-heartedly second that opinion. It’s one of the reasons I started this series — to help draw attention to how good it can be to have a personality-diverse church where everyone’s unique gifts are appreciated.

Just because INFPs feel it’s their responsibility to connect with the church doesn’t mean the church shouldn’t also work on making itself a welcoming place for INFPs. God has created great variety in people and encourages a diversity of gifts and talents in the church, so we should as well.

Like most introverts, INFPs feel most comfortable at churches that give them space for reflection and time to learn on their own. Patricia and Brian both mentioned that they learn about God’s word best when they’re reading alone. When they do come together with other believers, INFPs tend to prefer quiet settings. Two INFPs who wrote to me talked about enjoying quiet prayer time and the music service best. Another said he would prefer to have “more strict rules on the respect the house of the Lord needs. No phones, and no talking.”

Boniface specifically mentioned that “aggressive, in-your-face preaching” is not a good way to reach INFPs. Brian also said, “I love a preacher that isn’t screaming the word into my ears,” but added “I think as long as the preacher is anointed by the spirit, the spirit will call my spirit.” INFPs tend to have preferences for a certain type of church service, but they’re also open to learning from any teacher who seems to be sincerely following God. 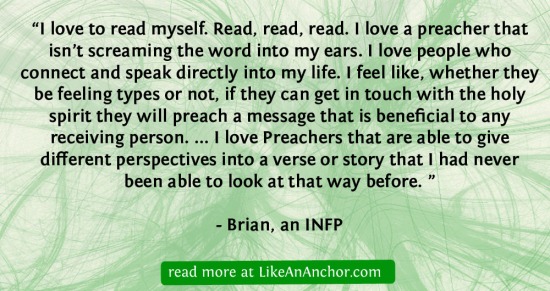 Fighting For The Faith

Everyone who’s a Christian faces challenges as they try to follow Jesus. Only four INFPs responded to this question so I hesitate to make any broad generalizations for the whole personality type. However, three of those four mentioned some kind of disconnect from God as a struggle (the fourth mentioned socialization with people in their age group, a fairly common challenge for introverts like us).

Boniface writes that “being faithful” is his biggest challenge as a Christian. Patricia says, “When I go through bouts of depression in response to stress in my life, I lose sight of who God is (God’s continual provision for me, and the hope that He gives me simply from being present). I do not become angry at Him, or unaware of His presence, but I become distracted and confused in my own negative feelings.” And Brian mentioned that he deeply identifies with Paul’s struggle in Romans 7:15-20.

Brian also added another challenge, saying he has difficulty spontaneously talking with someone about the gospel. He writes, “I would love to tell everyone but don’t want to seem like I’m forcing anything down. I respect people and their current beliefs, but I feel like the times we are in today don’t allow for much growing in what is correct. It’s more of a ‘live, and let live’ sort of moto for the world now and no one really wants to be told they’re wrong.” That’s something I’ve struggled with, too — finding the confidence to stand up for your belief in God’s truth in a way that connects with people rather than driving them away.

For all the posts in this series, I’m not going to try and fit the answers to “Why are you a Christian?” into a few neat paragraphs. Rather, I’m quoting from each of the people who responded to my original post so they can tell you about their faith in their own words: 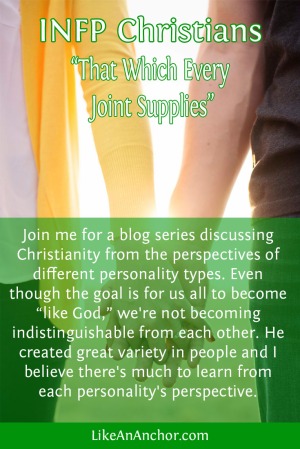 Your turn! If you want to share your Christian INTP story or talk about INTPs in the churches, comment below. You can also check out the other posts in this series here:

If you’re a different personality type looking to contribute an upcoming blog post in this series contact me or head over to the original post. I’d love to feature you! Please note: unless you tell me otherwise, I’ll assume that by getting in touch you agree I can quote you directly and credit you by first name (or screen name) and Myers-Briggs type in future projects.

34 thoughts on “That Which Every Joint Supplies: INFP Christians”