I’m always excited to receive a new Jody Hedlund book to read and review before its release. I’ve read and enjoyed the first three books in her Bride Ships series: A Reluctant Bride, The Runaway Bride, and A Bride of Convenience. This final book, Almost A Bride, was a disappointment for me. There’s some really good character growth, but overall I didn’t enjoy this story nearly as much as I did the first books in the series or her other novels I’ve read. This might have something to do with my own personal experiences, and I’ll be sure to talk about that in this review so you can decide for yourself if I’ve judged the book too harshly.

Kate Millington has no trouble finding potential husbands. Staying engaged, however, is a problem. She arrives in the frontier mining town of Williamsville intending to marry her latest fiancé, only to panic and back out of their deal. He’s the fourth man she’s failed to marry — two back home, and now two more since she arrived in British Columbia on a bride ship. She longs for true love, but she’s also frightened of trusting any man with her heart.

Zeke Hart barely remembers Kate from their childhood. Back then, she was just the little sister of his best friend. He’s sure she couldn’t have good memories of him, considering how he left things back home. Falsely accused of a crime, he ran away to the new world and turned his back on God. Now a prosperous owner of a gold mine and one of the most powerful men in the area, he doesn’t see a need for faith. But meeting Kate again convinces him he has a powerful need for a wife. If only she wasn’t so hung-up on that whole issue of him not being a Christian.

In the background of Kate and Zeke’s personal struggles and ill-advised romance, there’s another threat building. A jealous ex-fiancé stabs Zeke. Someone sets an explosive charge in his mine, nearly killing him. He receives anonymous threats. Perhaps the question of whether or not they should be together isn’t the only thing these two need to worry about.

My Issues With The Story

I was not expecting to feel so conflicted about this book. On the one hand, it’s a fairly straight-forward historical romance with some great character growth at the end of the book. But on the other hand, there are a few parts that don’t seem well edited and I have serious concerns about how Zeke is portrayed.

I suspect the short time between release dates for books 3 and 4 may have rushed the editing process. For example, the first chapter opens with a short bit of dialogue. There’s no immediate context for it, and after the initial interaction there’s 4 paragraphs of description/backstory before we get back to the opening scene. I found myself skimming those paragraphs (2 pages worth, when reading the digital book on my phone) to try and figure out why I should care about this opening exchange between the two characters. And then one of the characters (the one whose dialog opens the whole book) turns out to be important. He isn’t even named. It just seems a sloppy way to start the story, and it’s not the only time something like this happens.

The character relationships also seem rushed with very little substance at first. Zeke and Kate are both instantly attracted to each other in a very physical way. For Kate we at least have the background that she had a childhood crush on him, but Zeke doesn’t remember her well (she was his best friend’s little sister) and so he’s ready to marry her within a few chapters just because he feels protective of her and she’s pretty. They’re falling madly in lust with very little conversation or connection (at least at first; they do get to know each other better but it takes a while). I like my romance novels with a bit of heat, but not if that’s the main/only reason for them liking each other.

First off, kudos to Jody Hedlund for managing to accomplish so much character growth that by the end of this book I actually did think Kate and Zeke could be good together. For the first 75% of the book, though, I really didn’t like either of them. I found Zeke especially problematic, and that’s largely because of my own experiences coloring how I read someone who acts the way he does.

Even after Kate makes it clear she will not marry a man who doesn’t share her faith, Zeke refuses to respect her boundaries. He sabotages her relationships with other men, using his power and influence to threaten them (something he repeatedly mentions violates his own principles, but it’s okay because he can’t let anyone undeserving have her). He gets her into compromising positions, such as luring her into his arms and kissing her while they’re on his bed. After they’re caught in that situation and gossip makes it imperative that they marry, he convinces her to agree to a speedy wedding by kissing her worries away (i.e. manipulating her physical desires to make her ignore valid concerns).

Those are huge red-flags that a man is going to be emotionally and physically controlling/manipulative, if not out-right abusive. Of course, this is a Christian romance so that’s not the direction Zeke goes. He changes after a profound renewal of his faith (as evidenced by a beautiful scene where Kate gets cold-feet before their wedding and he prays with her instead of seducing her). His repentance seems sincere and he makes the choice to let her go, knowing he needs to be sure his faith is genuine before trying to win her again.

However, it does worry me that he shows up after 8 months of no contact only to insist she can’t marry anyone else (saying, “I’m not letting him have you” even after she says that’s not up to him). This sort of possessiveness is a romantic trope, but coupled with his earlier controlling behavior I find it problematic. Perhaps I’m judging him too harshly because of my own experiences being in a relationship with a manipulative man, but I don’t like this sort of thing in my romance novels. 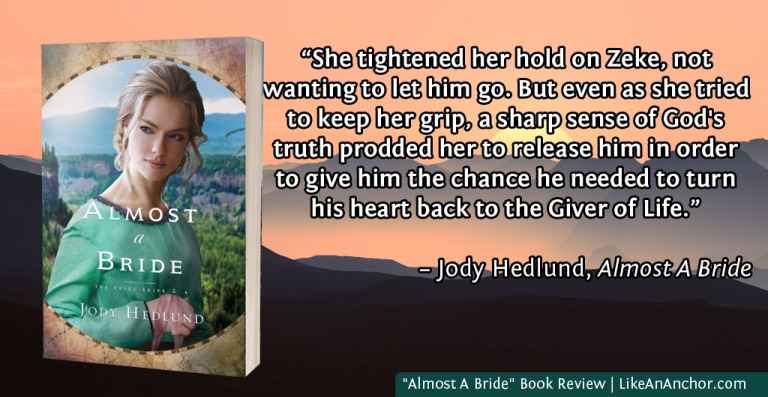 There Are Some Really Good Messages

In fairness to this book, there are some wonderful messages of healing and redemption. I found Kate frustrating in many scenes and thought she seemed unbelievably clueless about how compromising her relationship with Zeke became. However, I could understand why she was so frightened of and conflicted about relationships considering her background. Her mother was a Christian and her father was not, and he abandoned the family when Kate was a little girl. Of course she has trust issues. And, in fairness to Zeke, he is more understanding of her fears and more careful of how he treats her once he understands what she’s struggling with. Ultimately, I found her to be an understandable and sympathetic character.

Probably the strongest message of this book is that God can heal all wounds. He can fill the desires of our hearts, if we’re willing to let Him. We need to go to Him for healing instead of seeking it in other people. And until we do that, there’s a very good chance we’ll be using other people instead of loving them. It’s a powerful message, and a necessary one. I just wish I’d liked the first 75% of the book as much as I liked most of the last 25%.

I tend to rate books that I’ve been given to review and promote quite generously, but (mostly because of my serious reservations regarding Zeke’s character) I’m only giving this one 3 out of 5 stars. He changed in this book, but you can’t count on that happening in real life. If a man treats you like Zeke treats Kate, my advice is to run the other direction no matter how attractive he is.

Almost A Bride will release two weeks from today on August 25th. You can click the links below to pre-order it and to learn more about Jody Hedlund’s work (I’d personally recommend just getting the first three books in this series, but since you’ll be coming at this one from a different perspective than I am you might really enjoy it). My thanks to Bethany House publishing, Jody Hedlund, and NetGalley for an ARC of this novel in exchange for an honest review.

One thought on ““Almost A Bride” Book Review”