In the beginning, God created the heavens and the earth. The earth was formless and empty. Darkness was on the surface of the deep and God’s Spirit was hovering over the surface of the waters. God said, “Let there be light,” and there was light. (Gen. 1:1-3)

In him was life, and the life was the light of men. The light shines in the darkness, and the darkness hasn’t overcome it. (John 1:4-5)

God saw the light, and saw that it was good. God divided the light from the darkness. God called the light “day”, and the darkness he called “night”. There was evening and there was morning, the first day. (Gen. 1:4-5)

Clearly, John meant us to connect the opening of his gospel with Genesis through his phrase, “in the beginning.” But that’s not the only connection. Light also links these two accounts. It’s not until later in the creation story that God makes the sun, stars, and moon, so this first Light must be something else. And it’s something powerful enough to cause Day and Night before any of the physical light sources we know of existed.

John identifies this Light at creation with the Messiah, Jesus (John 1:6-16). (Language note: Messiah is the Hebrew word for Christ. Both words mean “anointed”.) It’s not just Christians who’ve made this connection, though. Even Jewish rabbis who are still waiting for a Messiah other than Jesus recognize the Light in Genesis does refer to the Messiah.

God’s first words in the Bible are: ” ‘Let there be light!’ And there was light. And God saw the light, that it was good.” When we study the creation account closely we notice that it was not until the fourth day that God created the “two great lights”, the sun and the moon. The Sages understood this too to be a Messianic allusion, and so the Midrash known as Pesikhta Rabbah, which was read from the 9th century on in connection with feast days, asks, “Whose is this light which falls upon the congregation of the Lord?” and answers, “It is the light of the Messiah” …

The Rabbis considered the Aramaic word Nehora, ‘light’, to be one of the secret names of the Messiah, since we read in the Aramaic part of the book of Daniel that, “He knows what dwells in darkness, and light dwells with him” (2.22). (from “The Messiah In The Old Testament In The Light of Rabinnical Writings” by Risto Santala)

The Yalkut, a rabbinic anthology from the medieval period, says this:

‘And God saw the light, that it was good.’ This is the light of Messiah … to teach you that God saw the generation of Messiah and His works before He created the universe, and He hid the Messiah … under His throne of glory. (quoted in “What The Rabbis Know About The Messiah” by Rachmiel Frydland)

Even without knowing who the Messiah is, these rabbis understood that the Light in Genesis points to Messiah, whom they saw as the “center of all creation”

END_OF_DOCUMENT_TOKEN_TO_BE_REPLACED

One phrase I frequently pray is, “Thank you for bringing us from darkness into light.” It’s an incredible blessing that each believer partakes of. Without God the Father drawing us to His Son, the Light of the world, we wouldn’t even know the world around us is in darkness.

Do we really understand and value this light, though? And, equally important, do we live in the light now that we’ve been called to follow the Light?

It’s not a popular thing in today’s society to make distinctions between right and wrong, holy and profane, light and darkness. But that’s something we must do because it is something God does. We have to know the difference between light and darkness so that we can choose the light and live in relationship with God.

When we read the phrase “woe to those who ___” it seems like a scary, sobering pronouncement. It means great sorrow or distress, which is what comes on those who forsake God. Hebrew carries another shade of meaning as well. “Woe” is hoy (H1945), which is an exclamation like ah! alas! ha! O! In the sort of context we’re looking at today, we can read this word as a cry of grief and despair from God at seeing the evil His people are doing that’s leading them away from the light.

God has good reason to exclaim hoy! over these people, for He knows what happens to those who “have rejected the law of Yahweh of Armies, and despised the word of the Holy One of Israel” (Is. 5:24). Spoilers: it’s not pretty. END_OF_DOCUMENT_TOKEN_TO_BE_REPLACED

Let’s take a trip back to the early 1st century. It’s a few days before Passover and the Jews are heading to Jerusalem for the Feast. As they travel, they sing the songs of ascent like they do every year. On this particular year, though, there’s an extra level of excitement. A man named Yeshua (Jesus) arrived on the scene a few years ago and many think he could be the Messiah. He’s even riding into Jerusalem on a donkey’s colt, as Zechariah said the Messiah would.

“Hoshiya-na! Baruch haba B’Shem Adonai!” they call. Save us now! Blessed is He who comes in the name of the Lord!

As Yeshua rides in, the people spread their garments in the way. They also cut palm branches as if they were here for the Feast of Tabernacles instead of the Passover and the Feast of Unleavened Bread. They’re expecting the Messiah to kick the Romans out, redeem Israel, and restore the kingdom. They’re hoping for the fulfillment of Tabernacles — the Messiah, son of David, ruling in power and might.

Instead, this Yeshua turns his donkey toward the temple. Once there, he “drove out all of those who sold and bought in the temple, and overthrew the money changers’ tables and the seats of those who sold the doves.” Instead of driving the pagans out of Jerusalem, he drove corruption out of God’s house, saying, “My house shall be called a house of prayer,’ but you have made it a den of robbers!” END_OF_DOCUMENT_TOKEN_TO_BE_REPLACED

If you’re like me, you’ve wondered, “What should I pray about?” and “How should I pray for others?” We know we’re supposed to pray as Christians and we’re given model prayers, but our prayer’s exact contents are left up to us. That makes sense — prayer is a conversation with God, not a recitation. But that also means we have to keep studying our Bibles to keep a good dialogue going between us and our Creator, as well as to gain deeper insights into how we ought to pray.

Paul’s epistles include several beautiful examples of his prayers for fellow believers. The book of Ephesians has two, both related to further deepening of their faith. A comment in last week’s sermon drew my attention to the second of these prayers, and I noticed the other when re-reading the whole letter. I was going to cover both in one article, but there’s far too much depth to cut the Bible study short. We’ll only talk about one of these prayers today. 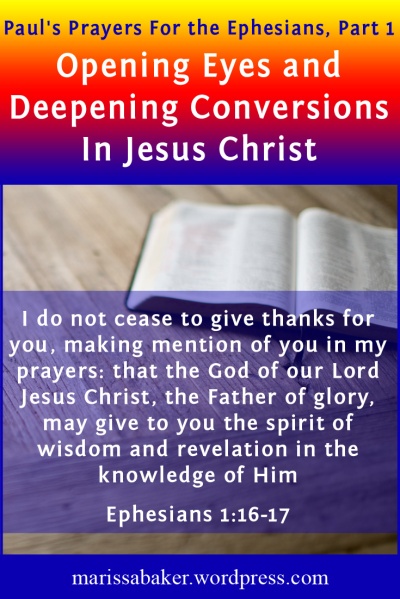 Paul opens this letter blessing “the God and Father of our Lord Jesus Christ, who has blessed us with every spiritual blessing in the heavenly places in Christ” (Eph. 1:3). He talks about redemption, grace, and God’s will for us, along with our trust in Christ and the assurances we’ve been given of a glorious future. Then he says,

Therefore I also, after I heard of your faith in the Lord Jesus and your love for all the saints, do not cease to give thanks for you, making mention of you in my prayers (Eph. 1:15-16)

Paul’s not just praying for them. He’s also giving thanks that they’re already walking by faith in the Lord and loving the brethren. They’re practicing important commandments and grounded in fundamental truths. Because of that, he can pray they would experience a deeper conversion. END_OF_DOCUMENT_TOKEN_TO_BE_REPLACED

If we say we’re followers of Jesus Christ, there are certain things we should, nay, we must do. As we talked about last week, there are observable markers of being someone who follows God — things we should be able to notice when we examine ourselves. Those things are inseparably connected with Christ’s presence in us.

There is plenty of freedom within the perfect law of liberty, but there are absolutes as well. God is highly personal and He’ll work with you on a personal level. That does not, however, mean He has different requirements for how different people follow and worship Him. He’s also a just God who is not inconsistent in His commandments, laws, and expectations. We might have different understandings of what God expects, but as we grow toward God we should also be growing in unity as we understand His mind more fully. There isn’t one law for you and one law for me. There’s just God telling us all to walk in His ways. 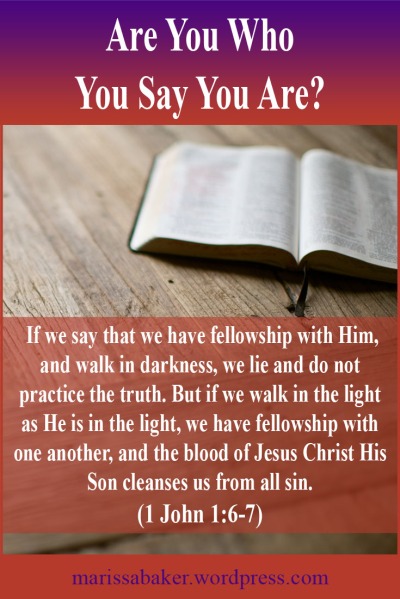 John begins both his gospel and his first epistle with a focus on Jesus Christ’s role as the Word of life. Then, in the epistle, he focuses on how we can have fellowship with this great Being and His Father. We must “walk in the light as He is in the light,” “confess our sins” so He’ll forgive us, and then keep His commandments (1 John 1:5-2:3). We cannot claim to know God unless we’ve keeping His word and walking as Jesus walked (1 John 2:4-6). God wants us to be part of His family and that means becoming like Him (1 John 3:1-2). END_OF_DOCUMENT_TOKEN_TO_BE_REPLACED

There’s been a phrase stuck in my head since our study of the minor prophets last year. It came to mind over and over — in prayer, randomly while thinking about something else, and after hearing someone had died (which happened quite a lot last year). The phrase comes from Malachi 4:

For behold, the day is coming, burning like an oven, and all the proud, yes, all who do wickedly will be stubble. And the day which is coming shall burn them up,” says the Lord of hosts, “That will leave them neither root nor branch. But to you who fear My name the Sun of Righteousness shall arise with healing in His wings; and you shall go out and grow fat like stall-fed calves. You shall trample the wicked, for they shall be ashes under the soles of your feet on the day that I do this,” says the Lord of hosts. (Mal. 4:1-3)

Obviously a prophetic context, but what might it mean for us today? What can we learn from, and about, “the Sun of Righteousness” and the “healing in His wings”? END_OF_DOCUMENT_TOKEN_TO_BE_REPLACED