I’m a little fuzzy on the subject of violence in the Bible, and talking with or reading the opinions of other Christians doesn’t make it any less confusing. We can all agree murder is wrong. After that, there doesn’t seem to be much agreement at all. Should a Christian use violence, sometimes even deadly violence, to save someone’s life or defend themselves?

Zoë: “Preacher, don’t the Bible have some pretty specific things to say about killin’?”

Book: “Quite specific. It is, however, somewhat fuzzier on the subject of kneecaps.”

In this situation in Firefly, Shepherd Book armed himself and joined his shipmates to rescue Malcolm Reynolds from torture and death. He did not violate the commandment “You shalt not murder,” or even the King James’ rendering “Though shalt not kill” (Ex. 20:13). But does this kind of violence violate the spirit, if not the letter, of such commandments? If he had killed in self-defense, would it have been wrong?

I don’t think there is any question about murder being wrong. Even in societies without the Bible as a guide, laws against murder are usually part of the culture. It’s on the subject of “killing” where things get sticky for Christians. If someone is attacking your family, is it permitted to use violence to stop them? Does unintentionally killing someone who is trying to harm you make guilty of murder in God’s eyes?

The Hebrew word translated “kill” or “murder” in Exodus 20 is râtsach (H7523). Strong’s defines it as, “to dash in pieces, that is, kill (a human being), especially to murder.” Like many Hebrew words, the exact meaning is dependent on the context, and The Complete WordStudy Dictionary: Old Testament points out that the word is used “to indicate premeditated murder” as well as “an accidental killing,” slaying someone as an “act of revenge,” and “death by means of an animal attack.” Other scriptures help narrow down the definition, as C.S. Lewis points out in this quote from Mere Christianity.

It is no good quoting “Thou shalt not kill.” There are two Greek words: the ordinary word to kill and the word to murder. And when Christ quotes the commandment He uses the murder in all three accounts. … All killing is not murder any more than all sexual intercourse is adultery.

The Issue of Hate 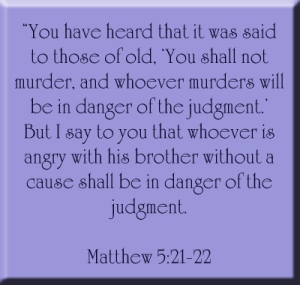 C.S. Lewis was not a pacifist (he wrote a whole article on the “why” of this viewpoint, but I have yet to find a copy). I admire his writings, but there are other people whose opinions I admire who are adamant that it is wrong for a Christian to serve as a soldier and wrong for a person to kill someone in self-defense.

For some people, I think the distinction between murder and killing comes down to the idea of a death being accidental and/or premeditated. We know from the instructions God gives for cities of refuge (Joshua 20) that accidental killings  do not come under the death-penalty ascribed to murder. The reasons given for not condemning a man who accidentally caused his neighbor’s death are these: “he struck his neighbor unintentionally, but did not hate him beforehand” (Josh. 20:5).

People seem to go two ways on interpreting this verse. One: killing someone in self defense does not constitute murder because you “did not hate him before hand.” It was not a premeditated, vengeful killing, therefore it is considered an accident. C.S. Lewis seems to come down on this side when he says, “We may kill if necessary, but we must not hate and enjoy hating.”

Whoever hates his brother is a murderer, and you know that no murderer has eternal life abiding in him. (1 John 3:15)

The second argument I’ve heard goes something like this: planning to defend yourself makes the death premeditated. You might not be deliberately trying to kill a specific person, but if you intend to kill whoever attacks you and your family, the killing was planned. This also means you don’t fulfill the requirement “he struck his neighbor unintentionally.”

Something doesn’t sit well with me about this last viewpoint. Perhaps it’s partly the implication that most people who intend to defend themselves if attacked also have a desire to kill (which I don’t see in the people I know who are prepared to defend themselves). There are also elements of hypocrisy. The person who thinks self-defense is wrong will probably not hesitate to call 911, and if the person attacking them is killed by police officers I’m not sure they’d feel terribly guilty.

I don’t have much of a conclusion for this post. In theory, I tend to lean more towards C.S. Lewis’s views. In practice, though, one of the reasons I quit Tae Kwon Do is because I hated even practicing how to hurt people. What are your thoughts on this subject?