Last week, we began a study of Hosea, and covered the first three chapters. We looked at how Hosea’s marriage to a prostitute pictured God’s covenant with unfaithful Israel in the Old Testament, and how that serves as a warning to us. We need to learn from Israel’s example and not follow their pattern of repeatedly rejecting God, but rather hold fast to Him as He fulfills His promises to reestablish a marriage covenant with His people.

As we continue in Hosea, we see God addressing the reasons for Israel’s unfaithfulness. Everything that separated Israel from God was Israel’s fault.  God never let down His side of the bargain — Israel got into trouble because they walked away from Him. This holds true for the New Testament as well.

If we endure, we shall also reign with Him. If we deny Him, He also will deny us. If we are faithless, He remains faithful; He cannot deny Himself. (2 Tim 2:12-13)

God is always faithful to His promises, including His promise that sin will be punished. Like with Israel, it is still up to us to choose between life and death, blessings and cursing (Deut. 30:9).

Hear the word of the Lord, you children of Israel, for the Lord brings a charge against the inhabitants of the land: “There is no truth or mercy or knowledge of God in the land.” (Hos 4:1)

God gives three reasons for His “controversy” with Israel. They lacked truth, did not show mercy, and had no knowledge of Him. This resulted in “swearing and lying, killing and stealing and committing adultery” (Hos. 4:2). The farther they strayed from God, the more corrupt and destructive they became.

This verse specifically refers to knowledge about God and His ways. The New Testament tells us that “the wisdom of this age” — knowledge that the world esteems — is coming to nothing (1 Cor. 2:6), but that “all the treasures of wisdom and knowledge” are hidden for us to find in the Father and Christ (Co. 2:2-3).

Chapters 4 and 5 cover punishments for Israel, and deal with prophecies of an Assyrian invasion and Judah’s alliances with Egypt and Syria. In chapter 6, the people say, “Come, and let us return to the Lord,” but they are not sincere (Hos. 6:1, 4).  Their sham repentance is not what God was looking for.

For I desire mercy and not sacrifice, and the knowledge of God more than burnt offerings. But like men they transgressed the covenant; there they dealt treacherously with Me. (Hos. 6:6-7)

God is all about relationship. He wants to know the people we’ll become when we learn to know Him. All the religious services and laws given to Israel weren’t the “point” of the Old Covenant. They were supposed to be an outward sign of an inward condition — a heart full of truth, mercy, and the knowledge of God.

Israel’s lack of relationship with God was a result of choices they make to walk away from Him.

When I would have healed Israel, then the iniquity of Ephraim was uncovered, and the wickedness of Samaria. For they have committed fraud; a thief comes in; a band of robbers takes spoil outside. They do not consider in their hearts that I remember all their wickedness; now their own deeds have surrounded them; they are before My face. (Hos. 7:1-2)

Wickedness, lies, adulteries (Hos. 7:3-4) — their sins kept piling up until God could say of the people that “none among them calls upon Me” (Hos 7:7). The entire nation rejected the One who they had entered into a covenant with.

Woe to them, for they have fled from Me! Destruction to them, because they have transgressed against Me! Though I redeemed them, yet they have spoken lies against Me. They did not cry out to Me with their heart when they wailed upon their beds.
They assemble together for grain and new wine, they rebel against Me; though I disciplined and strengthened their arms, yet they devise evil against Me; they return, but not to the Most High; they are like a treacherous bow. Their princes shall fall by the sword for the cursings of their tongue.  (Hos. 7:13-16) 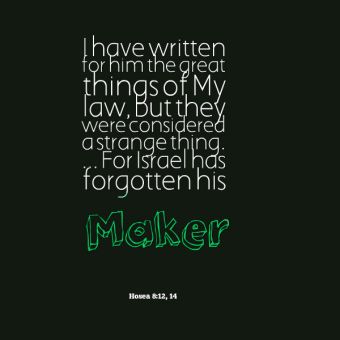 Israel did this continually in the Old Testament. Psalm 78 records that even though “their heart was not steadfast with Him, nor were they faithful in His covenant” that God was “full of compassion” and held back His anger many times (Ps. 78:37-38). He was grieved by their sins, because they would not let Him be their God. Though He acted as their Redeemer, Deliverer, and Rock, “again and again they tempted God, and limited the Holy One of Israel” (Ps. 78:35, 41-42). By not believing in Him, they rejected His good works in their lives.

This rejection of God continued into the New Testament as well. Matthew 13:58 records that Jesus “did not do many mighty works” in His hometown “because of their unbelief.” Mark’s account of this incident phrases it, “He could do no mighty work there, except that He laid His hands on a few sick people and healed them” (Mark 6:4-6). Where there was belief, simply touching the edge of Christ’s garments brought healing (Mark 5:27-29, 34). Where there was no faith, He was actually limited in how many miracles He could perform.

Israel was given a choice whether or not to follow God and welcome His involvement in their lives. Many of them made the wrong choice, as Paul describes in Romans 11 when comparing God’s people to an olive tree where some of the natural branches were removed. In this analogy, Gentile New Testament Christians are wild olive branches grafted into the Rootstock. Once there, we also have a choice to make.

You will say then, “Branches were broken off that I might be grafted in.” Well said. Because of unbelief they were broken off, and you stand by faith. Do not be haughty, but fear. For if God did not spare the natural branches, He may not spare you either. Therefore consider the goodness and severity of God: on those who fell, severity; but toward you, goodness, if you continue in His goodness. Otherwise you also will be cut off.  And they also, if they do not continue in unbelief, will be grafted in, for God is able to graft them in again. (Rom. 11:19-23)

Like so many serious warnings in the Bible, this contains hope as well as caution. The Bible provides us with records of Israel rejecting God, being punished, and returning to Him again and again. God leaves as many doors open as possible for people to come back to Him, and He’s eager to “graft them in again” if they repent. These doors are open to us as well. But God still wants us to learn from Israel’s mistakes and choose not to leave Him at all, because even though He is a God of enormous mercy there is a point where we can go too far away to get back to Him.

For if we sin willfully after we have received the knowledge of the truth, there no longer remains a sacrifice for sins, but a certain fearful expectation of judgment, and fiery indignation which will devour the adversaries. Anyone who has rejected Moses’ law dies without mercy on the testimony of two or three witnesses. Of how much worse punishment, do you suppose, will he be thought worthy who has trampled the Son of God underfoot, counted the blood of the covenant by which he was sanctified a common thing, and insulted the Spirit of grace? (Heb. 10:26-29)

Like He did in Deuteronomy 30 with Israel, today God sets before His people a choice between life or death, blessings or cursing, and good or evil. He wants us — pleads with us — to choose life, blessings, and good, but the choice is still ours to make.