How many people do you really open up to? Even if you’re an “open book,” there are probably things you don’t share with everyone. There are secrets, aspects of our personality, and thoughts that we only show closest friends, family or a spouse. You may have parts of you hidden so deep no one sees them.

What about in your relationship with God? Even though He knows everything about us, we can still chose to hold things back from Him. We can tell Him to stay away, keeping Him at arms length and refusing to let go and surrender to His work in us.

Opening up and letting myself be seen is a challenge I face in human relationships, and in this fall holy day season I’ve been thinking about whether I try to do the same thing with God. I think that I’m more open with Him than with anyone else, but are there still things that I’m trying to hold back or hide?

Jesus is supposed to be our friend and lover. He wants to know you more thoroughly than anyone else ever will, but He wants you to chose that relationship. He won’t force Himself into your life, though He will knock.

I sleep, but my heart is awake; it is the voice of my beloved! He knocks, saying, “Open for me, my sister, my love, my dove, my perfect one; for my head is covered with dew, my locks with the drops of the night.” (Song 5:2)

The woman in this part of the Song of Songs has “slumbered and slept,” and now Christ is outside asking to come in. “He sues for entrance who may demand it; he knocks who could easily knock the door down” (Matthew Henry’s Commentary). He doesn’t upbraid her for shutting Him out — He just wants her to let Him in. Have we also locked Him out? perhaps through carelessness if not deliberately?

she did not say, I will not open, but, How shall I? Note, Frivolous excuses are the language of prevailing slothfulness in religion; Christ calls to us to open to him, but we pretend we have no mind, or we have no strength, or we have no time (Matthew Henry)

Matthew Henry talks about this as “The slights which careless souls put upon Jesus Christ,” and which actually demonstrate “a great contempt” for their savior. When we ignore Jesus’ request to come into our lives, we reject His work in us.

Here, in the Song, the woman finally opens the door when she sees His hand at the door. Unfortunately, she waited too long for welcoming Christ in to be easy.

I opened for my beloved, but my beloved had turned away and was gone. My heart leaped up when he spoke. I sought him, but I could not find him; I called him, but he gave me no answer. The watchmen who went about the city found me. They struck me, they wounded me; the keepers of the walls took my veil away from me. (Song 5:6-7)

If we aren’t willing to open ourselves up to Christ when He knocks, He will be harder to find. If we don’t unveil ourselves to Him, we might find ourselves lost, alone and stripped of our covering pretenses before we find Him again. This can happen multiple times in a Christian’s life, just as this pattern is repeated in the Song (Song 3:1-4). Our lives are often a dance of drifting away and coming back to Christ. 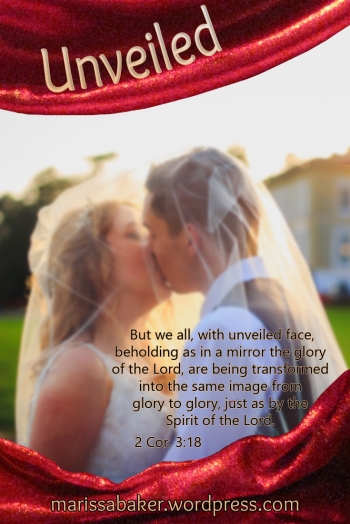 Veils keep us from fully experiencing God. The veil in the temple separated the Holy of Holies — where God’s spirit appeared — from the rest of the temple complex. Prior to Christ’s sacrifice, only the High Priest could enter, and only once a year (Heb. 9:1-8). The moment Jesus died, “the veil of the temple was torn in two from top to bottom” (Matt. 27:51). His death removed the most visible separation between God and His people.

There was another veil mentioned in the Old Testament that Paul talks about in the New. After Moses spoke to God, he shone so much with God’s reflected glory that Israel feared him. Moses wore a veil to hide his shining face before everyone but God (Ex. 34:29-35). Paul wrote about this veil in his second letter to Corinth.

But their minds were blinded. For until this day the same veil remains unlifted in the reading of the Old Testament, because the veil is taken away in Christ. But even to this day, when Moses is read, a veil lies on their heart. Nevertheless when one turns to the Lord, the veil is taken away. (2 Cor. 3:14-16)

Christ has torn away all the veils between the Lord and His people. The temple veil which tore at His death opened the way into His sanctuary, and when we turn our hearts to Him He takes away the veil shielding true understanding of the Torah.

But we all, with unveiled face, beholding as in a mirror the glory of the Lord, are being transformed into the same image from glory to glory, just as by the Spirit of the Lord. (2 Cor. 3:18)

We have to unveil our faces if we want to see His unvelied face. To know Him, we must want to be known. He took the first step — will we be equally open with Him?

Psalm 139 talks about God knowing us thoroughly — all our thoughts, every part of our personality. It also includes a very important line where David invites God into this deep, intimate relationship.

David’s willingness to be seen by God, and his request that God know him, are key to the sort of closeness described earlier in Psalm 139. Today, we can have that same sort of intimacy with our Lord if we let Him in.

Behold, I stand at the door and knock. If anyone hears My voice and opens the door, I will come in to him and dine with him, and he with Me. (Rev. 3:20)

Our Beloved is knocking on our doors, asking us to let Him in. Turn your face to Him, take off the barriers you’re putting up between you and Jesus. See, and be seen. 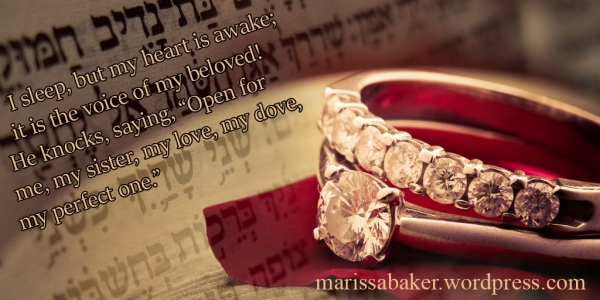 Credits for photos used in blog images this week: