One of the biggest problems in modern Christianity is an extreme either-or mentality. We lack balance, straying from one ditch to the other. Consider the Christian’s relationship with the Law. Some will say we must keep the whole law slavishly and seek part of our salvation in it (legalism), while others reject it entirely and say God doesn’t care if we keep His commands as long as we have Jesus (license). Both views miss the point.

Most arguments that the Law isn’t relevant today start with Paul. But Paul’s letters contain things “hard to understand” which people who aren’t well-grounded in the entirety of scripture can “twist to their own destruction” (2 Pet. 3:15-16). When we’re going to study a complex subject like this, we have to start somewhere more straight-forward. I can think of nowhere better than words directly from Jesus’ own lips.

When Jesus came to this earth, He didn’t tell people He was done with the Law. Instead, He said, “I did not come to destroy but to fulfill” (Matt. 5:17). This word, pleroo (G4137), means to fill to the fullest extent. Or, as Thayer’s says, “to cause God’s will (as made known in the law) to be obeyed as it should be, and God’s promises (given through the prophets) to receive fulfillment.”

Jesus “fills up” the Law every time He references it. He reveals the essence of the Law by saying it hangs on the two great commandments: “You shall love the Lord your God with all your heart, with all your soul, and with all your mind” and “You shall love your neighbor as yourself” (Matt. 22:37-40, see also Matt. 7:12).  When a young man asks how to inherit eternal life, Jesus first points him to the law and then expands on how to love your neighbor (Luke 10:25-37). Clearly, the law isn’t as irrelevant as some have thought.

But the law also isn’t as complicated as others have assumed. Jesus berated the Pharisees for neglecting “the weightier matters of the law: justice and mercy and faith” (Matt. 23:23). The Jewish leaders were narrowed in on the minutia of the law and how righteous they could try to make themselves. They lost sight of the law’s purpose so much that Jesus told them “none of you keeps the law” (John 7:16-24). They’d also piled their own laws on top of God’s laws, and Jesus reversed that by doing things such as showing it is lawful to do good on the Sabbath (Mark 3:4-5). 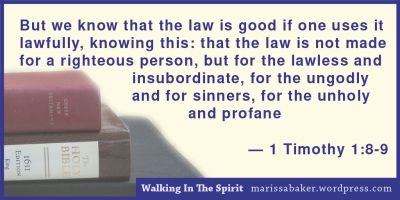 “We know that the law is good,” but only “if one uses it lawfully” and the pharisees didn’t. It’s not meant for beating up righteous people — it’s for convicting those who practice evil things which are “contrary to sound doctrine” (1 Tim. 1:8-5-11). All those who work wickedness will face God’s judgement, including those who consider themselves righteous in the eyes of the law  (Rom. 1:28-2:6).

Written In Our Hearts

God knew the law couldn’t give people eternal life. This wasn’t because of a problem with His laws, but rather a problem with the people. We couldn’t truly keep the law without a change of heart that can only come from a relationship with Jesus. In showing what sin was, the law demonstrated that we’re incapable of being like God on our own (Rom. 3:10, 19-20).

We weren’t just left in a state of hopelessness, though. In accordance with promises made in the Old Testament, the first covenant was set aside, ended by the death of the One who’d established it, and He washed us clean from sin. We’re justified by the grace of God (rather than by our own works in keeping the law perfectly, since that’s impossible) and we become inheritors in a New Covenant.

For if that first covenant had been faultless, then no place would have been sought for a second. Because finding fault with them, He says: “Behold, the days are coming, says the Lord, when I will make a new covenant with the house of Israel and with the house of Judah — not according to the covenant that I made with their fathers in the day when I took them by the hand to lead them out of the land of Egypt; because they did not continue in My covenant, and I disregarded them, says the Lord. For this is the covenant that I will make with the house of Israel after those days, says the Lord: I will put My laws in their mind and write them on their hearts; and I will be their God, and they shall be My people. (Heb. 8:7-10, quoting Jer. 31:31-34)

Those under the New Covenant have God’s law written in their hearts. We’re meant to “walk in newness of life” because baptism into Jesus Christ makes us dead to sin and transforms our character (Rom. 6:3-4). Under the law, sinners (that’s all of us) were condemned to death (Rom. 3:23; 6:23). Under grace, sin has no dominion. We aren’t condemned under the law because we’re living in Christ and obeying His commandments from the heart (Rom. 6:14-18).

That’s not to say what we do doesn’t matter. If we choose to reject God’s way of life and walk contrary to Him we will die regardless of the good we did in the past (Ezk. 19:19-32). But if we strive to follow God and keep turning back to Him when we stumble, we will live because God’s goodness helps us move forward in living a godly life.

In Galatians, Paul says the Law “was added because of transgressions” until the promised Messiah should come (Gal. 3:19). I believe this is telling us that God wanted a simple relationship with His people: choose good by being like God and you’ll live. But people were quite inventive in coming up with ways to stray from God’s goodness. They needed clearer guidelines so they could see what was of God and what was not, and so we were given the Sinai covenant.

Is the law then against the promises of God? Certainly not! For if there had been a law given which could have given life, truly righteousness would have been by the law. But the Scripture has confined all under sin, that the promise by faith in Jesus Christ might be given to those who believe. But before faith came, we were kept under guard by the law, kept for the faith which would afterward be revealed. Therefore the law was our tutor to bring us to Christ, that we might be justified by faith. But after faith has come, we are no longer under a tutor. For you are all sons of God through faith in Christ Jesus. (Gal. 3:21-26)

Now we’re getting at what “not under the law” means for us. The law convicts us by giving us “knowledge of sin” (Rom. 3:2) and letting us know we deserve death because we don’t live up to God’s holy standard (Rom. 7:9-13). Because the New Covenant has been established, that conviction can lead us to Christ for transformation. 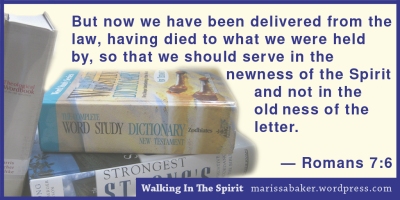 In Christ, we’re no longer “under the law” because God’s character is written in our hearts. We don’t need the “tutor to bring us to Christ” because we’re living in Christ. He’s guiding our actions toward perfect fulfillment of God’s law as we “serve in the newness of the Spirit and not in the oldness of the letter” (Rom. 7:6). We’re no longer living in sin because we’re living by the spirit, so we don’t fall under condemnation of the law by living in the lusts of the flesh.

I’d love to jump into a discussion of Romans now, but I’m sure this post is already long enough 🙂 Maybe we’ll pick this up again next week. Discussions about how God transforms us, what it means to be in covenant with Him, and the way we’re expected to behave as Christians are woven throughout the entire Bible. It’s far too big a topic to cover in one post (or for one person to have all the answers on). But I hope I’ve provided some food-for-thought about how God wants us to view His law.

One thought on “Walking In The Spirit: God’s Character In Us”