Most of you are probably familiar with a debate between Christians who believe God created Jesus in Mary’s womb and those who believe Jesus preexisted His human life. You might have strong feelings one way or the other, or you might not care. As one of my friends recently asked, why does it matter where Jesus came from as long as you believe in Him as your savior now?

But I think it does matter. Jesus is the foundation for all the foundational truths we learn as Christians. Without His sacrifice, we couldn’t have eternal life or a relationship with God. He’s the Head of the church and we’re constantly told “look to” and “consider” Him. On top of that, our goal is to become like God as part of His family, so understanding what the Father and Son are like gives us greater insight into our future. How we view Christ’s role in God’s plan matters.

I’ll just say right now that I believe Jesus preexisted His incarnation as human. In fact, the main reason I’ve never written about the subject is because I felt the scriptures were so clear on this point. But evidently they’re not, because people I like and respect keep bringing it up. Just a couple weeks ago, I overheard a conversation at church that started something like this: “Do you think Jesus preexisted? I’m not so sure …”

How you answer this question drastically affects how you see Jesus’ relationship with His people and God’s entire plan. There’s a big difference between God creating a Son to die in your place, and half the original God-family choosing to die for you.

When you do believe Jesus preexisted His human life as a divine being who “was God” (as John says), you get this narrative: the two members of the God-family chose to create humans knowing one of them would have to die in these peoples’ place after they sin. As the Word (Logos – an expression of intelligence, John 1:1, 14), the being who became Jesus interacted with people in the Old Testament, covenanted with humanity, was sent by His Father into the world as a human, voluntarily lived and died, then went back to His divinity having made it possible for us to join the family.

What does that narrative look like without Christ’s preexistence? The best I can figure is you would have God making the unilateral decision to create mankind and binding Himself in covenant with a specific people. That covenant included promises of a better covenant, which could only be instituted after someone died to pay for the broken covenant. But instead of having either covenanting party die, God created a substitution sacrifice by creating a more God-like human to die in His place and in our place. That just doesn’t fit what we know of God’s character.

I’ve talked with people who think the only argument in the New Testament that supports Jesus’ preexistence is found in the first chapter of John’s gospel. While that is the lengthiest passage on the subject, it’s certainly not the only one.

And those are just the first, and most obvious ones, that come to mind. A little more looking finds other verses about His role in creation (Eph. 3:9; Heb. 1:2, Rev. 3:14) and about a plan from the beginning for Him to come in the flesh (2 Tim. 1:9; 1 Pet. 1:19-20; Rev. 13:8). Then reading the gospels you start to notice details about prophecy, history, and Jesus’ relationship with the Father that point to them having known each other for a lot longer than 33 human years. For example, Jesus says, “I beheld Satan as lightning fall from heaven” (Luke 10:18, KJV). 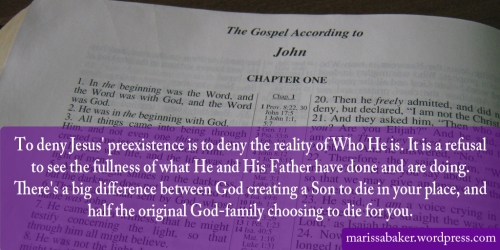 Two Lords In the OT

If Jesus preexisted His human form, we should expect to find references to two God-beings in the Old Testament. And we do. Sometimes people talk about the “God of the Old Testament” as if only the Father or the Word was involved, but there has always been two Lords working with humanity.

In this question, as with many others, we need to resist getting bogged down in our own theories about how to interpret out-of-context bits of scripture. We need to seek God’s big-picture view. To deny Jesus’ preexistence is to deny the reality of Who He is. It is a refusal to see the fullness of what He and His Father have done and are doing. To reject it, we would not only have to reject key passages in the writings of the Apostles John and Paul, but also the worlds of Jesus Christ Himself and the story of creation. Jesus’ preexistence is woven into the entire Bible story, and it speaks to a level of commitment and love for humanity that defines Him from Genesis to Revelation and beyond.

3 thoughts on “Why Does It Matter If Jesus Existed Before He Was Human?”