Having watched Frozen last Tuesday (I shoveled the driveway so I could get to the theater) I’ve been in a Disney watching mood. Since my sister and I had been discussing Lucifer the cat’s role in Cinderella recently, I decided to start with that film.

Is this really the story of poor, misunderstood cat?

The mice describe Lucify as “meany, sneaky, jump at you.” But if Lucifer the cat could talk, what would his version of this film look like? Cinderella wakes him up early every morning, orders him to “come,” and then shuts the door on his rump. Next, she takes Lucify down to a kitchen inhabited by a dog – a dog that mocks him and dreams of chasing and eating him. If he tries to defend himself by getting that horrible dog thrown out of the house, Cinderella berates him.

But Cinderella isn’t the only person in this house who torments the cat. Cinderella says, “It’s certainly not my idea to feed you first,” which shows that it’s his owner’s idea to wake him up early. She also decrees that “Lucifer gets his bath,” a bath clearly meant to punish Cinderella at the cat’s expense. And then the stepmother leads a music lesson for her off-tune daughters in the room Lucify has chosen for his nap. It would make anyone grumpy.

On top of this, he is surrounded by a mouse infestation encouraged by the woman who drags him out of bed every morning. These mice must be gotten rid of – they are on the tables, in the serving trays, stealing trim from the sewing room, and have the entire house honeycombed with tunnels and secret doors — but when he catches one Cinderella takes his prize away and shakes him. These aren’t just any mice either – they attack him unprovoked in the middle of breakfast! They pluck out his whiskers, pull his tail, topple a broom on his head, trick him and snap a button in his face, pull on his eyelids, then one turns into a horse and attacks him. Finally the mice come after him with forks and fire, the birds gang up on him to drop pots and pans on his head, and they set the dog on him and he falls out of the tower (in the original uncut version, it is clear that this fall was fatal).

Not A Grimm Tale

Contrary to what you might read when people are contrasting Disney fairy tales with the “original Grimm version,” Disney’s Cinderella is not based on the version told by the Brothers Grimm, but rather on Charles Perrault’s “Cinderella, or The Little Glass Slipper” (as stated in the opening credits). This is the story where Cinderella sleeps in “the garret at the top of the house,” the one with a fairy godmother and magic pumpkin, and where the stepsisters’ feet don’t fit the glass slipper. It does depart from Perrault’s tale in a few aspects. For one thing, Cinderella’s father is absent from the story, but not necessarily dead, nor is Cinderella included in the invitation to the ball. She does not even ask to go, and says “That would not befit me at all” when her stepsisters teasingly ask if she would like to go to the ball. The ball lasts two days, and she leaves her slipper the second night. Her sister’s beg her forgiveness at the end, and she arranges marriages for them with “two great noblemen of the court.”

Grimm’s “Cinderella” is like Perrault’s concerning the main story (a girl is mistreated by her step-family, goes to a ball magically, leaves her shoe, and marries a prince), but there are significant differences. In this story, there is no fairy godmother – Cinderella’s father brings her a twig which she plants on her mother’s grave and it grows into a magical tree with a bird that lives in its branches and throws her “whatever she had requested.” That is where she gets the clothes for all three days of the ball. She does not loose her slipper because she is fleeing before the magic disappears – the prince coated the castle steps with pitch so she couldn’t run away so fast. The slipper that he gets as a result of this trick is made of gold. Both step sisters cut off parts of their feet to fit in the shoe, and the prince only notices the blood oozing out when they are halfway back to the castle. The Prince asks Cinderella’s father is he has any other daughters (he’s clearly alive in this version), and the man says, “No. There’s only little Cinderella, my dead wife’s daughter, who’s deformed, but she can’t possibly be the bride.” The prince demands to see her and marries her when the shoe fits. At the wedding, the stepsisters eyes get pecked out by birds.

Would the prince have married Cinderella if he didn’t have to chase her?

This isn’t so much a question inspired by re-watching Cinderella as it is something I’ve been wondering for a while now. Why does the prince pick Cinderella? Yes, I know it’s a fairy tale and he has to marry her for the happy ending, but it becomes an important question if you want to tell a story that fleshes out the prince’s character (my retelling makes them childhood friends to get around this problem). There’s even an entire song devoted to this question in the Rodgers and Hammerstein version: “Do I Love You Because You’re Beautiful?”

In this Disney film, the prince appears for the first time 48 minutes into the story. We don’t hear their meeting – we just see him bow and kiss her hand (it evidently wasn’t much of an introduction. She doesn’t realize he’s the prince, and he doesn’t know her name). He doesn’t even have a line until singing “So This Is Love.” Between the palace, and the waltzing, and the walk in the garden it’s a pretty impressive first date. It doesn’t seem like quite enough to lead to matrimony, yet the Grand Duke says, “He won’t rest until he finds her. He’s determined to marry her.” Not that the Prince actually does any searching himself – the Grand Duke is the one who travels around trying on slippers.

In the written version they spend a little more time together and there’s a reason for the secrecy about her name. Perrault’s version has a two-day ball, and Cinderella talks with her stepsisters in her princess guise. She has to keep her name a secret so they won’t know her. In Grimm’s version, the ball lasts three days and she hides her identity because the prince is actually following her far enough each night to question her father about the elusive princess.

While they do spend a little more time together in the written stories, it still doesn’t seem like enough to base a marriage on. The prince can choose any woman in the kingdom to marry, but the one he goes after is the mysterious princess who presents an intriguing challenge. Would she have held his attention if it had been easy to win her hand? I doubt it. 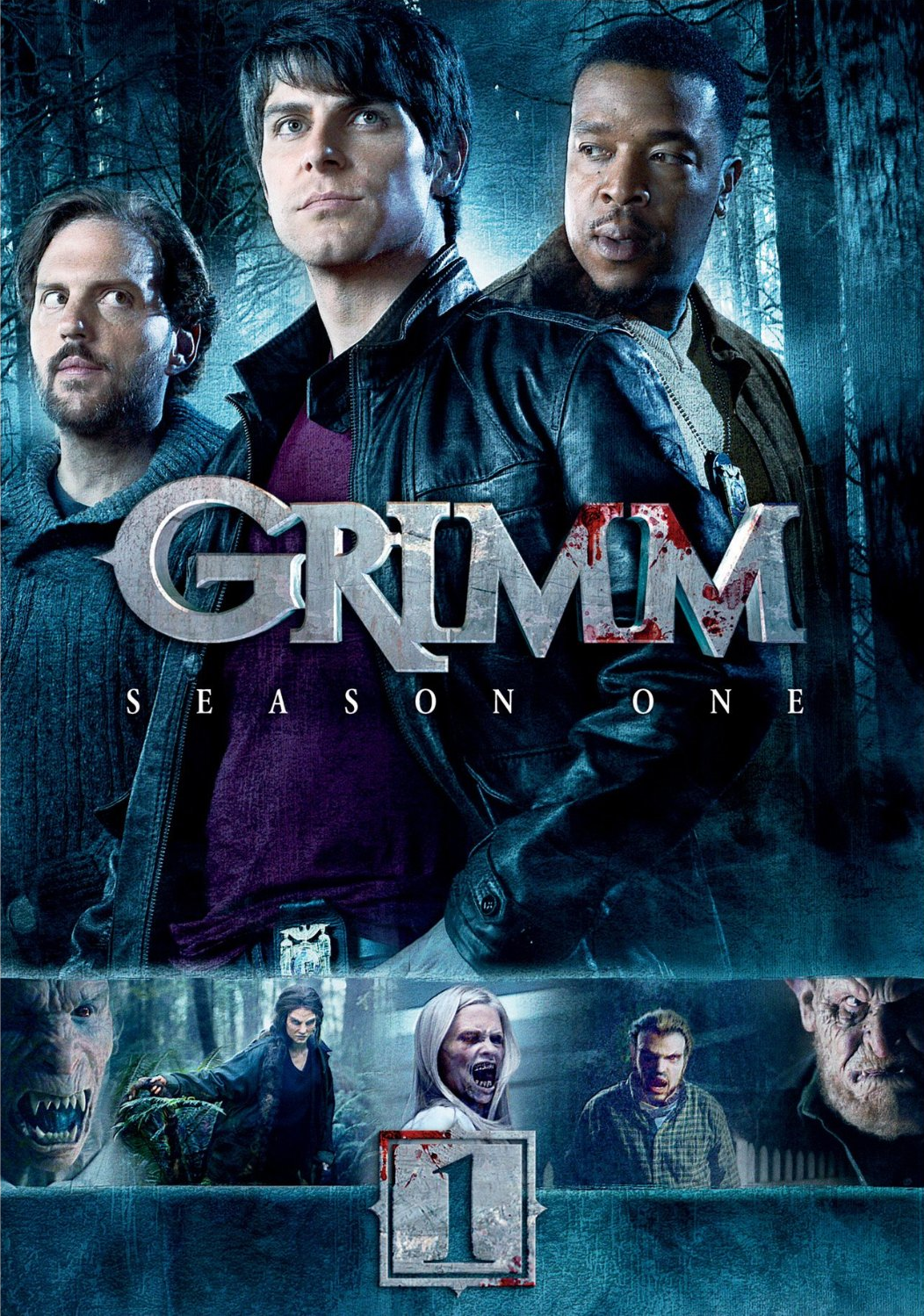 I recently started watching the TV show Grimm. I’m still about a season-and-a-half behind, but catching up pretty quickly (no spoilers if you’ve watched more than me!).  For those who aren’t familiar with the show, it’s about a homicide detective named Nick who recently inherited his family’s gift for seeing strange creatures known as Wesen. Together with his detective partner, his girlfriend, and a reformed Blutbot (aka “the big bad wolf”), Nick discovers that a surprisingly high number of Wesen happen to commit crimes in Portland, Oregon (seriously, are there no human criminals?)

The thing that makes Grimm different from other crime dramas, and what initially attracted me to the show, is the folkloric element. The stories are loosely based on fairy tales and myths from a variety of cultures, most notably those collected by Jacob and Wilhelm Grimm. Each episode uses elements of an original legend, but changes the plot. Another “change” that has been made is that Grimm is much darker than the popular idea of fairy tales as Disney princess stories.

I say “change” in quotation marks because the fairy tales most of us grew up with are MUCH tamer than the original versions (or, more accurately, the earliest versions we have written down). Yet many people assume fairy tales started out innocent and have been corrupted by our modern culture. Take this quote from Plugged In Online’s review of Snow White and the Huntsman, for instance.

I’ve always liked fairy tales, whether in cartoony-flick or storybook-for-the-kids form. But it appears that those “once upon a time” sweet and innocent versions don’t often make the grade nowadays. Today’s reimaginings usually have to come with a bit more bite.

The trend with today’s versions of fairy tales, including Grimm, isn’t so much making the stories darker as it is returning to fairy tales’ darker roots. Even the fairy tales we consider “sweet and innocent” used to have a darker side. Cinderella’s step sisters cut off their toes and heels to fit into the glass slipper. The Little Mermaid’s prince marries someone else and she considers murdering him, but dies instead. And I’m not even going to talk about Sleeping Beauty and Rapunzel.

Don’t misunderstand me — I love Disney films. And they can get pretty dark, at least so far as the villain is concerned. But I love the older versions as well. I wouldn’t read all of them to a young child, but it is possible to shelter children too much (see my previous post where I talk about banning fairy tales). And there is certainly no reason not to read fairy tales as an adult. In the words of C.S. Lewis,

When I was ten, I read fairy tales in secret and would have been ashamed if I had been found doing so. Now that I am fifty, I read them openly. When I became a man I put away childish things, including the fear of childishness and the desire to be very grown up.

Lewis also said, to those who think fairy tales belong in the nursery,  “Some day you will be old enough to start reading fairy tales again.” My own fairy tale reading did not begin in earnest until I had graduated high school, so I suppose by this definition the more fairy tales I read, the more grown-up I get.