In Revelation, the church in Laodicea received a warning and correction from Jesus that had to do with how they saw themselves.

To the angel of the assembly in Laodicea write: “The Amen, the Faithful and True Witness, the Beginning of God’s creation, says these things: ‘I know your works, that you are neither cold nor hot. I wish you were cold or hot. So, because you are lukewarm, and neither hot nor cold, I will vomit you out of my mouth. Because you say, ‘I am rich, and have gotten riches, and have need of nothing;’ and don’t know that you are the wretched one, miserable, poor, blind, and naked.'” (Rev. 3:14-17, all scripture references from WEB translation)

The things that the Laodiceans didn’t know about themselves were a threat to their spiritual position in Christ. He threatens to vomit them out of Him if they are not zealous to repent (Rev. 3:19). That’s pretty serious, and we can learn from His advice to them how to avoid similar mistakes.

Those who see the letters in Revelation as pictures of eras in the church tend to agree that we are currently living in the Laodicean era. And even if that’s not the case, those who “have an ear” are still instructed to “hear what the Spirit says to the churches” (Rev. 3:22). If we, like the Laodiceans, are ignorant of about our true spiritual condition then we need to heed this warning to wake up to the truth and change how we’re living.

Jesus starts out by telling the people who think they’re okay that they are in fact “wretched and miserable.” It reminds me of what Paul said in one of his letters: “let him who thinks he stands be careful that he doesn’t fall” (1 Cor. 10:12). Each of the words translated “wretched” and “miserable” are only used one other place in the Greek New Testament.

What a wretched man I am! Who will deliver me out of the body of this death? I thank God through Jesus Christ, our Lord! So then with the mind, I myself serve God’s law, but with the flesh, sin’s law. There is therefore now no condemnation to those who are in Christ Jesus, who don’t walk according to the flesh, but according to the Spirit. (Rom. 7:24-8:1)

Paul’s mindset was completely different than the Laodiceans. He knew he was in a wretched state and the only solution was to turn to Jesus for deliverance. This is reflected in his use of the word for miserable/pitiable as well. END_OF_DOCUMENT_TOKEN_TO_BE_REPLACED 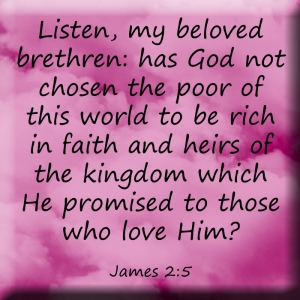