Last week, I stumbled across an article on Pinterest talking about female INFJs. Well, technically it was about INFj in the Socionics system, which is a bit different than the MBTI type and may include INFPs as well, but for purposes of this article we’ll just talk about INFJ types. The original article, written in 2011 by someone identified only as Beskova, paints a portrait of the INFJ type that is beautiful on the surface but doesn’t quite manage to reach their heart. It’s part of a disturbing trend in portrayals of INFJs, though this is the most extreme example I’ve seen.

Like many people who treat the INFJ type as quasi-mythical, this writer describes INFJs as flawless, naive, pure and submissive. They even describe a typical INFJ appearance: “Women of this type are very feminine and are delicate, modest and even shy. … They have a very ephemeral body, and sometimes lightly stooped posture.”

Reading on, it seems the INFJ has no faults. They never gossip or argue, meet adversity with mild gentleness, focus on humanitarian efforts, fit into any job, and submit themselves selflessly to helping the people in their lives. In short, the article says, “When a female INFj becomes your wife, know that in your home there lives a quiet angel” who “makes for one of the most obedient wives.”

The biggest problem with this portrait of an INFJ isn’t just that it’s untrue; it’s the fact that INFJ women may try to fit into this mold if they end up in a relationship with someone who expects “their” INFJ to act like this. One thing that’s become clear in the months I’ve been reading things INFJs share online is that we’re one of the types most vulnerable to getting involved in unhealthy relationships with narcissists. And INFJ descriptions that make us out to be perfectly submissive and obedient aren’t helping discourage interest from unhealthy people.

It’s true that INFJs are one of the most conflict-avoidant types. Until a person does something the INFJ can’t live with, we’ll often just nod and smile at most conversations and suggestions. This happens with casual acquaintances when we don’t want to wast energy on conflict, and in closer relationships when we don’t want to deal with the emotional fall-out of conflict unless there’s a very good reason. I talk about this at greater length in my INFJ Handbook.

But if you think INFJs can’t get angry or won’t take a stand when things aren’t as they should be, think again. INFJs tend to draw a line in their minds, and once it’s crossed we’ll make sure we let you know. Once we get started, we’ll probably tack on a list of every other way you’ve ever let us down as well. The closer we are to you, the better we’ll know how to tear you apart (note: we’re not proud of this fact, and many INFJs work hard at controlling their anger). The best way to avoid this in a relationship is to keep open lines of communication, which is the number one thing many INFJs are looking for in a relationship. INFJs prefer to keep our emotions out in the open, and if we feel safe and heard then there’s no need to bottle up our feelings until we explode.

In this socionics article, the writer talks about how INFJ women often need/want other people to make decisions for them. They write, “If you are her husband take responsibility for making major decisions in development of your family and she will with pleasure obey you.” Now, I’ll be honest — sometimes I do want people to make decisions for me. But if an INFJ is consistently told she can’t be trusted with important decisions and is left out of the planning process, then she’s going to stop trusting you.

The other party might not even notice an INFJ doesn’t agree with him if he’s expecting her to be what the article says: “friendly and dutiful, never quarrel nor ask much for themselves.” We place a high value on trust and communication in relationships, and assuming we agree with you instead of really asking us what we think is a good way to experience the INFJ door slam. 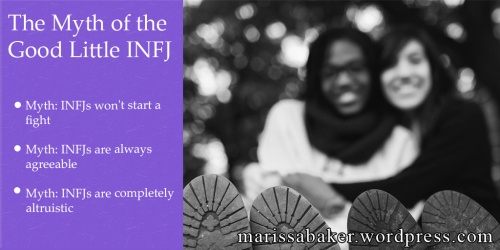 A tip for people who know INFJs: If we don’t actually agree with you, or simply don’t care, we’ll typically make non-committal sounds, nod our heads, and avoid eye contact. If pressured to commit to something we don’t want to do or think, but won’t openly disagree with, we’ll try to push it off to an unspecified future date. When an INFJ actually agrees with you, we’ll make eye contact, our face will light-up, and we’ll say things like “Oh, yes” instead of just nodding. Usually, we’ll also be able to explain why we agree with you in specific terms.

One last quote from the socionics article: “watch that her emotional resources aren’t spent on her girlfriends, who inadvertently will use your wife as a psychotherapist. She will never refuse them herself, of course. Out of compassion. Therefore, it will be best if you take the matter into your own hands and limit the flow of those desiring to obtain psychotherapeutic sessions and useful advice from her.” Excuse me! What gives someone else the right to limit an INFJ’s contact with her friends? That’s the sort of controlling behavior that’s a huge red-flag in any relationship.

In addition to being incapable of taking care of herself, INFJ wives are apparently so dutiful they’ll do all the housework without any complaint even though they hate cleaning and cooking. For the record, this INFJ loves cooking and the housework doesn’t always get done in a reasonable amount of time. Also, one reason INFJs will avoid conflict and try to help people is because of how it affects us. Sometimes I do what people ask just because I don’t want to stay awake for three hours that night re-hashing every word of the resulting argument. It’s a self-protecting mechanism. That’s not to say INFJs don’t care about people — we do, deeply, and we will support our friends and family whenever possible. It’s a good thing. We can stretch ourselves too thin at times, but INFJs value their introvert time and don’t usually need someone to step in an control their lives to keep them from burning out. We’re not that altruistic.

I may have dispelled some of the “mystic unicorn” aura surrounding INFJs, but perhaps that’s a good thing. Our rarity doesn’t make us better than other types, and type portraits that make us out to be something ephemeral and idyllic really aren’t helpful. As my siblings (and no doubt other people who INFJs have let into their lives) can testify, we’re not perfect.

31 thoughts on “The Myth of the Good Little INFJ”