When we start talking about the relationship between God’s law and New Testament Christians, everyone wants to jump right into Paul’s writings. It’s easy to pluck verses from his epistles out of context and use them to argue the law has been abolished and you don’t have to keep the commandments. But is that really the best explanation for passages like Romans 7 and Colossians 2 in light of the rest of the Bible?

I’ve written quite a bit about Romans but never Colossians, even though some commenters have asked. But a short time ago I was re-reading Paul’s letter to Colossae and felt a nudge in my spirit, “study this,” as I read 2:8:

Beware lest any man spoil you through philosophy and vain deceit, after the tradition of men, after the rudiments of the world, and not after Christ. (KJV)

This verse provides context for what’s to follow. Paul’s going to be talking about the difference between following traditions invented by men and following Christ. He’s not just talking about whether or not the Old Testament law matters since Jesus came in the flesh. There’s another factor in play.

Before going any farther in Paul’s writings, let’s look at what Jesus says. During His ministry, Jesus and His disciples were accused of things like Sabbath breaking, defiling Himself with sinners’ company, and unclean hygienic practices. We know that Jesus lived a sinless life and never broke His Father’s commands. But He did reject the additions humans made.

He answered them, “Well did Isaiah prophesy of you hypocrites, as it is written, ‘This people honors me with their lips, but their heart is far from me. But they worship me in vain, teaching as doctrines the commandments of men.’ For you set aside the commandment of God, and hold tightly to the tradition of men.” (Mark 7:6-8, WEB)

He’s not saying to stop following God’s commandments. He’s berating them for elevating their traditions to the same level as God’s law. The leading Jews of the time had things really mixed up. Even when they followed God’s law, they focused on the wrong things, emphasizing minute details and neglecting the “weightier matters.” That’s something Jesus criticized, but He speaks very differently about the law that came direct from God.

When a rich young man came to Jesus and asked, “What shall I do that I may inherit eternal life?” Jesus responded, “keep the commandments.” After the young man said he was already doing that, Jesus told him the only thing still lacking was a commitment to follow Jesus unconditionally (Matt. 19:16-21; Mark 10:17-21; Luke 18:18-22). Keeping God’s commands and following Jesus go hand-in-hand.

Not Judged For Following Jesus

With that understanding, we can go back to Paul’s writings. Knowing he would never contradict Jesus’ teachings gives us framework for understanding difficult passages like Colossians 2. Here, his focus is on following Jesus rather than human beings. One example Paul uses is the issue of circumcision. There was a faction in the early church that believed new male converts had to be circumcised according to the Law before they could receive salvation. But that was an aspect of the Old Covenant that pertained to the flesh and didn’t carry over. Rather, then emphasis is now on “circumcision made without hands” on a spiritual level (Col. 2:11-12, KJV).

But this wasn’t actually replacing something in the Old Testament. Spiritual circumcision was already God’s focus way back in the Torah (Deut. 10:16; 30:6, see also Jer. 4:4). It’s just now brought to the forefront as Jesus fills the law to its fullest. We’re to “serve in newness of spirit, and not in the oldness of the letter” now that Christ has taken away our condemnation for breaking the law (Rom. 7:6; Col. 2:14-15).

Therefore do not let anyone judge you with reference to eating or drinking or participation in a feast or a new moon or a Sabbath, which are a shadow of what is to come, but the reality is Christ. (Col. 2:16-17, LEB)

Some take this to mean no one should judge you for rejecting God’s dietary laws and holy day commands. But the focus in this chapter isn’t on moving away from Keeping God’s commandments. It’s about keeping them as He meant them to be kept by following Jesus instead of human beings.

The holy days weren’t something man came up with. They belong to God. And we have direct evidence of Jesus keeping Passover, the Days of Unleavened Bread, and Sukkot/Tabernacles. If God tells His people to observe days that belong to Him and Jesus Himself observed them as holy, one verse in a chapter that talks about rejecting human regulations doesn’t change that.

If you died with Christ from the elements of the world, why, as though living in the world, do you subject yourselves to ordinances, “Don’t handle, nor taste, nor touch” (all of which perish with use), according to the precepts and doctrines of men? Which things indeed appear like wisdom in self-imposed worship, and humility, and severity to the body; but aren’t of any value against the indulgence of the flesh. (Col. 2:20-23, WEB)

Paul states that he’s talking about ordinances that are commandments of men. He’s not telling us to reject God’s commands! Rather, he’s saying to follow God the way God tells us to follow Him instead of the legalistic worship practices piled on by human beings. When writing to Titus, Paul warned not to pay “attention to Jewish myths and commandments of people who turn away from the truth” (Tit. 1:14, LEB). Instead, Titus was to “say the things which fit sound doctrine” (Tit. 2:1, WEB). The standard for “sound doctrine” is the entirety of scripture, not just the New Testament and our cherry-picked parts of the Old (2 Tim. 3:16; Rom. 15:4). 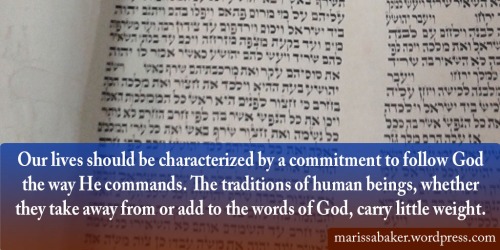 There are physical parts of the Old Testament law (e.g. hygienic practices for an encampment) that don’t apply to us today. There are parts that have been updated under the renewed covenant (e.g. we don’t stone people for death-penalty sins; they can be forgiven in Jesus Christ). But God never changes and the commandments He gave are still guides for helping us understand and develop His character. Obedience matters to God. Just look at how many times in John’s writings that loving and knowing God is linked to keeping His commandments (John 14:21;  15:10; 1 John 2:3-4; 5:2-3; 2 John 1:4-6).

God has never done away with His commands and there’s no indication He’ll do so in the future. In fact, the final sayings in the book of Revelation include these words to the contrary: “Blessed are they that do his commandments, that they may have right to the tree of life, and may enter in through the gates into the city” (Rev. 22:14, KJV). The city spoken of in this passage is new Jerusalem, which comes down to earth after the resurrections, Millennium, and final defeat of Satan. If God still intends to only fellowship with those who keep His commandments at that point, why would we think He doesn’t want that now?

Our lives should be characterized by a commitment to follow God the way He commands. The doctrines of men, whether they take away from or add to the words of God, mean nothing. If anyone contradicts the words of Jesus, then we follow Jesus. It’s that simple.