Unless you’re listening to a branch of Christianity that teaches God doesn’t expect anything from you, Christians talk about change quite a bit. We change our lives when we commit to leaving sin behind and following Jesus. We change how we think as we put on the mind of Christ. We change from being outside the faith to being grafted into God’s chosen people.

There are some things, though, that God doesn’t want to change about you. Or at least, that’s not quite the best way to describe what He’s doing. Rather, He wants to reveal the “you” that He created you to be. He doesn’t want us to get rid of our individuality, our gifts, or our true personalities (though it might feel that way at times).

The way God transforms us often involved quite a bit of change. But it’s not about turning you into someone you’re not. It’s more of a revelation of the truest, best version of you.

He Sees All Of You 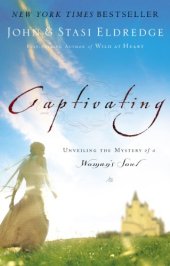 God wants a relationship with the real you. I’ve been reading Captivating by John and Stasi

Eldrege, and this quote caught my eye:

Though this book is specifically written to women, what I just quoted applies to both genders. Throughout the ages, God calls to our hearts. He longs for a relationship with people who aren’t going to hide themselves from Him.

Yahweh, you have searched me,
and you know me.
You know my sitting down and my rising up.
You perceive my thoughts from afar.
You search out my path and my lying down,
and are acquainted with all my ways.
For there is not a word on my tongue,
but, behold, Yahweh, you know it altogether. (Ps. 139:1-4, WEB)

When the Lord knows you like this, He’s not seeing the masks you wear for other people. He sees you, all of you. And He likes what He sees so much that Jesus sacrificed Himself to make it possible for you to be in a relationship with Him.

I don’t think most of us realize just how much God desires us. We’ve been too conditioned to think of God’s love as something unfathomable, or obligatory, or even impersonal. But He’s a passionate and wholly committed lover. Jesus loved all of us so much He died for you and me, and the Father loved us so much that He gave up His Son. What more proof do we need?

There’s a song called “Dayenu” that’s been part of Jewish Passover celebrations for over a thousand years. That’s not the season we’re in now (we’re in between Yom Teruah and Yom Kippur at the moment), but the song has been on my mind anyway. The title means “it would have been enough” or “it would have sufficed.”

This song lists 15 gifts of God (such as deliverance from slavery, the Torah, and the Sabbath) and says even one of those gifts would have been enough, yet God keeps giving more. To take a Messianic perspective on this, it would have been enough if Jesus had stopped with dying for us but He doesn’t. He lives for us, fights for us, and continues to pursue relationship with us.

The King Desires You

Psalm 45 is described as “A wedding song.” Hebrews 1:8 also identifies it as one of the Messianic Psalms because the kingly bridegroom is told, “your throne, God, is forever and ever” (Ps. 45:6). A little later in the Psalm, the words switch to addressing this king’s bride.

We know the bridgeroom in the song pictures Jesus Christ, and we know that the church is espoused to Him as His bride (2 Cor. 11:2; Eph. 5:31-32; Rev. 19:7-9). Therefore, we can safely say this verse we just quoted applies to us. The King of kings sees you as beautiful and He desires you.

Husbands, love your wives, even as Christ also loved the assembly, and gave himself up for it; that he might sanctify it, having cleansed it by the washing of water with the word, that he might present the assembly to himself gloriously, not having spot or wrinkle or any such thing; but that it should be holy and without defect. (Eph. 5:25-27, WEB)

Christ decided redeeming us from sin and death wasn’t enough without also making us glorious and bringing us into a close relationship with Himself. That’s what He’s doing as He continues to work in our lives today.

The Most Beautiful You

I’ve often wondered why God says, “I will take the stony heart out of their flesh, and will give them a heart of flesh.” Isn’t flesh bad? It sure seems like it in the New Testament when Paul talks about flesh versus spirit. But God says this heart of flesh lets them “walk in my statutes, and keep my ordinances, and do them” (Ez. 11:19-20, WEB). Clearly, this type of “fleshiness” is a good thing.

Maybe in this case a heart of flesh means God’s restoring your heart to what He always meant it to be. He’s taking away stony, hardened things piled up in and around our hearts and giving us back our most true and precious selves; the part that’s made in His image and which can respond to and connect with His spirit.

Jesus and the Father long to know the real you. The Lord is a gentleman in His dealings with us, though. He doesn’t break down doors or walls that you put up. He knocks and asks for permission to know you, heal you, and show you how glorious your true self can be in Him. We need to ask Him to help us; to show us who He created us to be and who we are in Him. Because that version of you is going to be the most beautiful, the most you that you’ve ever been.

One thought on “God Wants The Real You”