I was nominated by PearlGirl of INFJ Ramblings. Thank you so much! I wish I could nominate you back — you’re one of the bloggers whose posts I actually read on a regular basis 🙂 I’m so glad we connected through our blogging about INFJ things.

Seven Facts About Me:

Yes, you’re supposed to nominate 15 other bloggers and I’ve only nominated 7. I’ll try and make up for that by telling you why I like each one.

2HelpfulGuys — I only recently started following them, but I like what I’ve read so far.

Baptism For Life — this is my dad’s blog, and while I know he won’t take the time to accept the nomination you really should check out his posts if you’re looking for inspiring bloggers.

Introvert, Dear — a blog and Facebook group that is great to follow if you’re an introvert and/or HSP

Science and Faith — he’s a new blogger, and the first two posts are great. Looking forward to more!

See, there’s this thing called biology… — occasionally I disagree with this blogger. Usually, though, I’m bouncing up and down in my seat pointing at the screen and saying “That’s exactly what I think!”

SmileSupport313 — her posts are always encouraging. And she’s one of my very best friends, so of course her blog is worth reading. 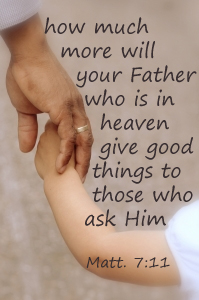 We had evening services yesterday, so there was a whole free day to fill with activities. My plan was to find all the book stores in the area and visit each, but we ended up at two antique stores and a mall instead. There was, however, a used book store in the mall, so I have one of the bookstores here checked off my list. I was particularly glad we stopped because I finally found a copy of C.S. Lewis’s Mere Christianity in hardcover for less than Amazon.com sells the paperback.

Some time ago, I signed up for an e-newsletter through biblegateway.com that sends a C.S. Lewis quote every day. This morning, it was a quote from Mere Christianity. It’s long, but I’d like to share it with you, if you don’t mind.

As a great Christian writer (George MacDonald) pointed out, every father is pleased at the baby’s first attempt to walk: no father would be satisfied with anything less than a firm, free, manly walk in a grown-up son. In the same way, he said, “God is easy to please, but hard to satisfy.”

I think every one who has some vague belief in God, until he becomes a Christian, has the idea of an exam or of a bargain in his mind. The first result of real Christianity is to blow that idea into bits. When they find it blown into bits, some people think this means that Christianity is a failure and give up. They seem to imagine that God is very simple-minded! In fact, of course, He knows all about this. One of the very things Christianity was designed to do was to blow this idea to bits. God has been waiting for the moment at which you discover that there is no question of earning a pass mark in this exam or putting Him in your debt.

Then comes another discovery. Every faculty you have, your power of thinking or of moving your limbs from moment to moment, is given you by God. If you devoted every moment of your whole life exclusively to His service you could not give Him anything that was not in a sense His own already. So that when we talk of a man doing anything for God or giving anything to God, I will tell you what it is really like. It is like a small child going to his father and saying, “Daddy, give me sixpence to buy you a birthday present.” Of course, the father does, and he is pleased with the child’s present. It is all very nice and proper, but only an idiot would think that the father is sixpence to the good on the transaction. When a man has made these two discoveries God can really get to work. It is after this that real life begins.

I think this is a great way to look at our relationship with God as His children. There’s not a thing we can do to earn salvation on our own. The second paragraph in this quote is saying basically the same thing Paul says when he writes, “For by grace you have been saved through faith, and that not of yourselves; it is the gift of God,not of works, lest anyone should boast” (Eph. 2:8-9). Every good thing in our lives is a gift directly from God. All that is good in us is a result of His work in our lives. We bring nothing to our relationship with God but our broken selves, desperately in need of Him to make us whole.

Such a realization is important because we cannot have a relationship with God without humility, and we cannot have humility if we think we are doing God a favor by agreeing to be part of His family. God’s family will be made up of people who know they have nothing to offer God and are wild with joy that He wanted to work with them anyway.