In 1 Corinthians, Paul makes several references to leavening and to Passover. For many readers today, these references mean very little because so many Christian churches have left the roots of their faith, which Paul was referencing here. In order to really understand key passages of 1 Corinthians, we need to understand Passover and the Feast of Unleavened Bread.

I know some (perhaps quite a few) of you are Christians who don’t keep Passover, but I hope you’ll still keep reading today’s post. I think you’ll find it interesting and maybe it’ll give you something new to think about and study.

The Passover story begins in Exodus 12. We’re nearing the end of the plagues of Egypt, and the Lord is telling Moses what the Israelite must do to avoid the final plague — the death of the first born. In the first month of the year, on the evening that begins the 14th day (Hebrew days begin at sunset), Israel was to kill a young male lamb, paint the door posts of their houses with its blood, then roast the lamb whole and eat it with unleavened bread and bitter herbs (Ex. 12:1-13).

The Lord goes on to describe a festival of unleavened bread (matzah) that follows the Passover. For seven days, no leavening (hametz) is permitted in anyone’s house and whoever eats leavened food will be cut off from God’s people (Ex. 12:15-20). Later instructions in Leviticus clarify the timing of all this, stating that Passover is on the 14th and Unleavened Bread begins with a holy convocation on the 15th, then ends with another holy convocation on the seventh day (Lev. 23:4-8). The two holy days are Sabbaths of rest where you are not to work, much like the weekly Sabbath.

Moving into the New Testament, the gospels make careful note of Passovers that Jesus kept during his ministry. The first is recorded in John 2:13-23. The second is skimmed over, though Luke 6:1 probably references the last day of Unleavened Bread. John 6:4 mentions the third Passover, and Christ’s final Passover is recorded in detail by all four gospels because that was the day He died.

He said to them, “I have earnestly desired to eat this Passover with you before I suffer, for I tell you, I will no longer by any means eat of it until it is fulfilled in God’s Kingdom.” (Luke 22:15-16, WEB)

He then proceeded to institute new Passover symbols for New Covenant believers. Jesus will not partake of the Passover again until the kingdom of God comes in the future, but He tells us to do so in memory of Him (Luke 22:17-20).

For I received from the Lord that which also I delivered to you, that the Lord Jesus on the night in which he was betrayed took bread. When he had given thanks, he broke it, and said, “Take, eat. This is my body, which is broken for you. Do this in memory of me.” In the same way he also took the cup, after supper, saying, “This cup is the new covenant in my blood. Do this, as often as you drink, in memory of me.” (1 Cor. 11:23-25, WEB)

Honoring Jesus By Keeping The Passover

The passage we just read from 1 Corinthians 11 is part of the most obvious Passover reference in this letter. Paul goes on to share instructions on how we’re supposed to prepare for Passover, as well as warnings about the dangers of not keeping Passover the correct way. END_OF_DOCUMENT_TOKEN_TO_BE_REPLACED

I’m struck by how many sacrifices people offered to God in the Old Testament. It wasn’t just the sin offerings and blood sacrifices we know pointed to Christ. There were also burnt offerings, grain offerings, and peace offerings given for thanks or as part of a vow, or voluntarily in worship and devotion to God (Lev. 1:1-3:17; 6:14-23; 7:11-36).

The book of Hebrews makes it very clear that Jesus fully filled all the offerings for sin, trespass, and atonement. This High Priest “does not need daily, as those high priests, to offer up sacrifices, first for His own sins and then for the people’s, for this He did once for all when He offered up Himself” (Heb. 7:27). But how are the other offerings fulfilled today? 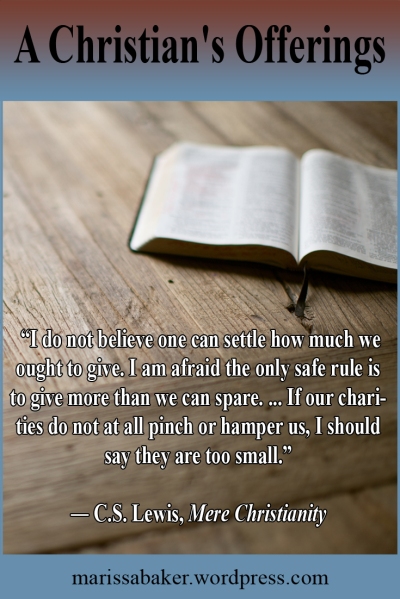 I think most churches encourage monetary offerings and/or tithing, even if they don’t use those exact words. That’s not the only thing we have to offer though. In fact, it’s not even the primary sacrifice God expects from His people today.

We’re to follow Jesus Christ’s example in all things, including offering ourselves. We won’t be the same type of sacrifice nor operate at nearly the same level, but in the most general sense that is what we’re expected to do.

I beseech you therefore, brethren, by the mercies of God, that you present your bodies a living sacrifice, holy, acceptable to God, which is your reasonable service. And do not be conformed to this world, but be transformed by the renewing of your mind, that you may prove what is that good and acceptable and perfect will of God. (Rom. 12:1-2)

God has everything He could ever need, yet He wants us.  We are a sacrifice that we offer to God with nothing held back as we fulfill the first commandment: “You shall love the Lord your God with all your heart, with all your soul, and with all your mind” (Matt. 22:37). END_OF_DOCUMENT_TOKEN_TO_BE_REPLACED

A verse that my father pointed out yesterday when I was Bible studying has been on my mind and I’d like to share some thoughts about it before I take off for Michigan for the weekend. It is the first part of 2 Chronicles 16:9

For the eyes of the LORD run to and fro throughout the whole earth, to shew Himself strong in the behalf of them whose heart is perfect toward Him.

The word ‘perfect’ is from the Hebrew shâlêm (H8003 שׁלם). I know very little about Hebrew, but the definintion for this word that is given in my Hebrew-Greek Key Word Study Bible is intriguing: “It means complete, whole, perfect …  uninjured, unhewn, untouched stones … peaceful, friendly, cherishing peace and friendship … It is interesting that the stones for the original altar and Solomon’s Temple were uncut (shâlêm).”

It is indeed interesting that the word for a heart that is perfect with God is the same word used to describe an altar upon which sacrifices could be offered to God. It is even more compelling when we consider the New Testament verses that speak of us as “the temple of God” (1 Cor. 3:16, 6:19; 2 Cor. 6:16). The Greek word in these verses is naos (G3485 ναός), which is used to refer to the Holy of Holies.

As we continue to keep the Feast of Unleavened Bread, it is a good time to examine our hearts before God. Are we offering ourselves as acceptable sacrifices? Do we say with the Psalmist, “Let the words of my mouth, and the meditation of my heart, be acceptable in thy sight, O LORD, my strength, and my redeemer” (Psalms 19:14).

Ye also, as lively stones, are built up a spiritual house, an holy priesthood, to offer up spiritual sacrifices, acceptable to God by Jesus Christ. (1 Peter 2:5)

I beseech you therefore, brethren, by the mercies of God, that ye present your bodies a living sacrifice, holy, acceptable unto God, which is your reasonable service. (Romans 12:1)

By Him therefore let us offer the sacrifice of praise to God continually, that is, the fruit of our lips giving thanks to his name. (Hebrews 13:15)