Well, I’ve been on Facebook for a while, but I now have a public page for my blog that you can all like. Click here to visit and “like” my page. Also, if you actually want to see my posts in your newsfeed, don’t forget to hover over the like button and choose “see first.”

I’m usually focused on serious stuff when discussing INFJs, but today I wanted something more lighthearted. We INFJs are deep thinking and often come across as serious, but we can also be fun-loving and positive. Many of us also like art and creative things, so you end up with doodles, comics, and cartoons describing us that range from screenshots with a caption to the elaborate “Care and Feeding of INFJs” Prezi. Here are a few of my favorites, but before we go any farther in this post … 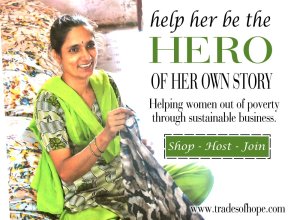 … I just wanted to remind you all that you’re invited to a Live Facebook event this Thursday evening (August 7th) at 8:00 pm EST for a company called Trades of Hope. Their mission is to give women around the world a chance to provide for themselves and their families by selling beautiful handmade items. The artists are from all over the world, and  you’ll learn more about them if you join us Thursday (you will need to friend me to access the event). There’s no pressure to buy, and I really do think you’ll find this company interesting and inspiring, as I do.

I’m not sure this one was put together by an INFJ, but it was posted on the Introvert, Dear Facebook page, which is focused toward INFJs along with other introverts and HSPs.

Love these “Type Heads.” They made some for each personality type.

There’s a whole collection of those ubiquitous motivational posters made by and for INFJs. I found most on Pinterest and don’t know who originally put each one together.

Just in case you were wondering, “No, we don’t see anything incompatible between the appreciation of love and beauty and that dangerous prairie dog.”

The artist for these little comics is INFJoe. On his wordpress, he describes himself as “an INFJ joe amid extroverts, sensors, thinkers, and perceivers, and still trying to come to terms with it on a daily basis.”

In my completely subjective opinion, I saved the best for last. The artist at Introvert Doodles posts one of these every day.

If you’re like me, you have a Facebook friend or two (or three or four) who posts their results from all those “Which *name of a TV show* character are you?” or “What time period should you live in?” quizzes. Even if you aren’t posting the results yourself, you’ve probably clicked on a few of them to see what your results are. It’s fun, it’s harmless, and it’s ridiculously popular. But why?

Several people are writing articles to answer the question Why Online Quizzes Are Taking Over Your Facebook Feed or discuss The Unstoppable Rise Of The BuzzFeed Quiz. Explanations include: we like to believe life can be chategorized, we’re on a search to answer the question “Who am I?”, we want to fit in with something, we want affirmation of how we see ourselves, and we’re looking for a distraction to combat the sense of information overload.

I like quizzes too. On the more respected/serious side, I’m interested in Myers-Briggs personality tests (I’m an INFJ). On the lighter side, I’m just as guilty of wanting to know which sandwich I am as the rest of you.

Who were you during the Renaissance? William Shakespeare (are you comparing me to one of the greatest writers ever? please, continue)

Which Doctor Who Doctor are you? 10th Doctor (of course — my favorite)

What state do you actually belong in? Minnesota (why?)

Which super power is right for you? Super smarts (you may all feel free to laugh)

Which Disney prince is your true love? Prince Eric (um, no)

One of the articles I linked above said none of your Facebook friends really care whether you’re more like Kirk or Spock (I’m Uhura by the way). In part that’s true — we want to find out what result we’ll get far more than we care about your result. But I’ve also enjoyed finding out that one of my former professors “is” Sheldon from the Big Bang Theory (which surprised none of his students, though he couldn’t understand why because he’s never watched the show).

On the whole, though, any connection from taking a quiz like this is superficial. You can’t maintain a relationship based on Facebook posts, and friendships aren’t deepened by learning what kind of sandwich you are. So maybe the larger issue regarding online quizzes is that they’re another way the internet allows us to kill time while keeping up the appearance of interacting with other people. It’s a poor substitute for real conversation though, as I was reminded by spending this past Sabbath in a place with no cell-phone service and no wi-fi. Instead, there was a  wonderful group of people to spend time with while we talked, walked up and down steep hills, and made popcorn over an open fire. And I didn’t miss Facebook or quizzes at all.